Does Addition of Perch Larvae as Prey Affect the Growth, Development and Cannibalism Rate of Pikeperch Larvae?
Previous Article in Special Issue

Welfare Challenges Influence the Complexity of Movement: Fractal Analysis of Behaviour in Zebrafish

Lucy A. Winder
and

Environmental enrichment, or the enhancement of an animal’s surroundings when in captivity to maximise its wellbeing, has been increasingly applied to fish species, particularly those used commercially. Laboratory species could also benefit from enrichment, but it is not always clear what constitutes an enriched environment. The zebrafish, Danio rerio, is used widely in research and is one of the most commonly-used laboratory animals. We investigated whether changing the structural complexity of housing tanks altered the behaviour of one strain of zebrafish. Fish were kept in three treatments: (1) very enhanced (VE); (2) mildly enhanced (ME); and (3) control (CT). Level of aggression, fertilisation success, and growth were measured at regular intervals in a subset of fish in each treatment group. The VE fish were more aggressive over time than either ME or CT fish, both in the number of attacks they made against a mirror image and in their tendency to stay close to their reflection rather than avoid it. Furthermore, VE fish were shorter than CT fish by the end of the experiment, though mass was not significantly affected. There was no significant effect of treatment on fertilisation success. These findings suggest that the way in which fish are housed in the laboratory can significantly affect their behaviour, and potentially, their growth. The zebrafish is a shoaling species with a dominance hierarchy, and so may become territorial over objects placed in the tank. The enrichment of laboratory tanks should consider aspects of the species’ behaviour. View Full-Text
Keywords: Danio rerio; structural complexity; aggression; territorial; boldness; fertilisation success Danio rerio; structural complexity; aggression; territorial; boldness; fertilisation success
►▼ Show Figures 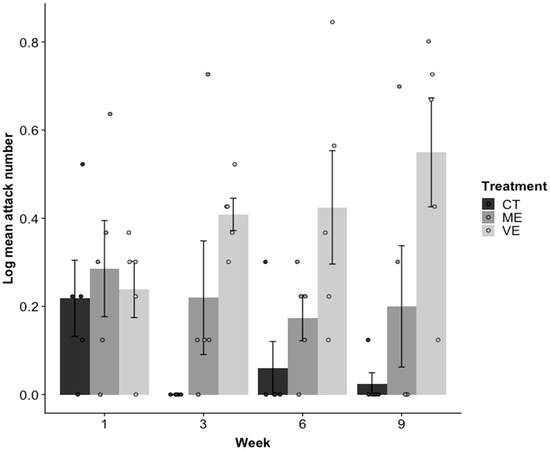