Single-Grain Quartz OSL Characteristics: Testing for Correlations within and between Sites in Asia, Europe and Africa

Finding the source or provenance of quartz grains occurring in a specific location allows us to constrain their transport pathway, which is crucial information to solve diverse problems in geosciences and related fields. The optically stimulated luminescence (OSL) sensitivity (light intensity per unit mass per unit radiation dose) has a high capacity for discrimination of quartz sediment grains and represents a promising technique for provenance analysis. In this study, we tested the use of quartz OSL sensitivity (ultraviolet emission) measured under different preheating temperatures and with blue light stimulation at room temperature (~20 °C) for sediment provenance analysis. Quartz OSL sensitivity measured at 20 °C is positively correlated with the sensitivity of an OSL signal measured using procedures (preheat at 190 °C for 10 s, blue stimulation at 125 °C and initial 1 s of light emission) to increase the contribution of the fast OSL component, which has been successfully applied for sediment provenance analysis. The higher OSL signal intensity measured without preheating and with light stimulation at room temperature allows the use of lower given doses, thus reducing measurement time. Additionally, the OSL sensitivity measured at 20 °C in polymineral silt samples of a marine sediment core is also suitable for provenance analysis, as demonstrated by comparison with other independent proxies. OSL signals obtained through light stimulation at room temperature have thus the potential to considerably expand measurement possibilities, including in situ measurements using portable OSL readers.
Keywords: sediment provenance; quartz fingerprint; luminescence; source-to-sink system sediment provenance; quartz fingerprint; luminescence; source-to-sink system

Mineral grains resting on or near Earth’s surface can be dispersed through multiple ways, such as by landslides induced by earthquakes [1] or extreme rainfall events [2], winds [3], rivers [4], coastal waves, or tidal currents [5], soil-living insects [6], and diverse human activities [7]. Tracking the primary or previous source of mineral grains allows for the reconstruction of varied events, ranging from past climate changes [8] to a pathway taken by a crime suspect [9]. Thus, methods to find the source or the provenance of mineral grains have several applications in geosciences and related fields. Quartz (SiO2) is the most frequent mineral in sediments [10], and it is widespread over the Earth’s surface, especially in the sand (63–2000 µm) and silt (4–63 µm) fractions. Thus, quartz is a valuable material in provenance studies due to its ubiquitous occurrence and high stability in most Earth surface settings. However, quartz grains are poorly discriminated by methods commonly used for provenance analysis of sediments, which are based on the chemical [5] or mineralogical composition of sediment mixtures or on chemical variations of specific minerals [11]. The optically stimulated luminescence (OSL) is the light arising from charges trapped in crystal lattice defects when quartz is exposed to ionizing radiation and subsequently released for recombination when quartz is exposed to a stimulation light [12]. The OSL sensitivity is defined as the intensity of light emitted per unit mass of the material and unit radiation dose (photon counts Gy−1 mg−1). The quartz OSL sensitivity ranges over five orders of magnitude [13,14] and can be measured in different types of sediment or sedimentary rock samples. Luminescence readers allow performing automated OSL measurements on aliquots (amount of grains) of silt, very fine to fine sand (62–250 µm), single grains of fine sand, or slices of sedimentary rocks [15,16,17] in a fast and low-cost way. Quartz has relatively low OSL sensitivity when crystallized in its parent igneous, hydrothermal, or metamorphic rocks [13,18], but it can be subsequently sensitized by artificial or natural heating [19] or illumination-irradiation cycles [20]. In nature, the OSL sensitization occurs after quartz is released from its parent rocks and is transported as a grain in sedimentary systems [13]. The OSL sensitization during the transport of quartz as sediment grain is attributed to repeated cycles of bleaching and irradiation [20,21,22]. Despite the fact that the increase of quartz OSL sensitivity due to bleaching–irradiation cycles is well demonstrated by laboratory experiments, e.g., [19,22], it is not conclusive if the sensitization is related with changes in the concentration of charge traps, recombination processes, or both [14,20]. However, this condition does not hinder the use of quartz OSL sensitivity for sediment provenance analysis, e.g., [21]. Previous studies to apply quartz OSL sensitivity in provenance analysis, e.g., [22,23,24] focused on the initial 1 s of the OSL decay curve obtained by constant energy blue light stimulation at 125 °C after heating the sample at temperatures from 160 to 260 °C, to eliminate unstable signals [25]. The OSL signal measured under this condition is presumably dominated by the fast OSL component [26], but quartz with low OSL sensitivity occurring in sediments around young mountain ranges can show the initial 1 s of light emission with significant contribution of medium and slow components [14]. Despite the successful use of the unstable 110 °C thermoluminescence (TL) peak of quartz in provenance analysis of coastal and marine sediments [27,28], little is known about the suitability of using unstable OSL signals for sediment-fingerprinting purposes. In this study, we performed experiments to improve measurements of quartz OSL sensitivity for provenance analysis. Experiments aimed to simplify protocols for OSL sensitivity measurements, including evaluation of heavy minerals contamination and whether thermal treatments to eliminate unstable OSL signals are necessary. Our experiments show that quartz OSL sensitivity measured without preheating and with optical stimulation at room temperature (~20 °C) can be used for provenance analysis in the same way as the OSL measured with preheating and light stimulation at 125 °C [21,22,23,28]. This expands the measurements conditions of quartz OSL sensitivity to in situ measurements in sediment cores and outcrop sedimentary successions, as well as in thermally sensitive materials hosting quartz.

When quartz OSL is measured by using preheat (160–260 °C), blue stimulation at 125 °C, and light detection in the ultraviolet band, the initial 1 s of light emission is presumably dominated by the fast OSL component [26], which was intensely characterized for dating purposes [25,35]. The extensive research to develop dating protocols based on the fast OSL component of quartz has also supported applications in sediment provenance studies, e.g., [21,22,23,24,27,28]. However, thermal treatments to isolate the fast OSL component usually require mounting samples on discs or cups for measurements in OSL readers built for dosimetry purposes. The decrease of the preheat temperature from 400 to 50 °C allows us to increase the intensity of the OSL signal (initial 1 s) and still preserve the pattern of sensitivity variation observed in the studied quartz samples using protocols [23] designed to measure a signal dominated by the fast OSL component. Higher signal intensity acquired by using lower preheat temperature is advantageous to measure low-sensitivity samples because it permits the use of lower given doses and reduce measurement time. In the same way, the OSL sensitivity measured without preheating and with stimulation at room temperature (~20 °C) is positively correlated with the sensitivity of the OSL signal with higher contribution of the fast component. The OSL sensitivities at room temperature (BOSL20°C) recorded after a 16 h pause or without pause between dosing and stimulation have similar patterns of variation. Accordingly, the preheat to eliminate unstable OSL components and light stimulation at 125 °C to avoid any effect of the 110 °C TL on OSL signal measurement can be neglected in OSL sensitivity assessment for provenance analysis of sediments. The BOSL20°C signal measured without preheating has higher contribution of medium and slow components, which are partially removed if heating treatments are applied before light stimulation [26]. Its correlation with the BOSLF sensitivity agrees with the observation that low and medium OSL components are also sensitized in nature (bleaching–irradiation cycles), similarly to the fast OSL component [13,20]. The main advantages of the BOSL20°C measured without preheating are the reduction of measurement time and the possibility to perform in situ measurements on sediment cores or sedimentary successions exposed in outcrops, using portable OSL readers with an attached X-ray source, e.g., [36].
The assessment of quartz OSL sensitivity in polymineral aliquots of sand requires bleaching other minerals presenting BOSL signals, but preserving the quartz OSL signal. Besides quartz, main mineral components of sands are feldspar and heavy minerals. Feldspar OSL signals can be bleached by using infrared stimulation, allowing for the measurement of quartz OSL signals in the presence of feldspar [37]. However, little is known about the effect of heavy minerals for measurement of quartz OSL sensitivity in polymineral aliquots. Magnetic heavy mineral concentrates have OSL sensitivities similar to low-sensitivity quartz, while nonmagnetic heavy minerals can show OSL sensitivities similar to medium-sensitivity quartz (Figure 1 and Table 5). Heavy minerals are minor components of sands, with higher concentrations (>10%) occurring only in sediments from specific geological settings, such as in areas around mafic parent rocks or environments where hydraulic conditions promoted the selective transport of lighter minerals like quartz and feldspar [38]. Thus, OSL signals arising from heavy minerals have minor influence on the record of quartz OSL sensitivity in bulk samples. However, the tracking of sediment layers enriched in heavy minerals (placers) is recommended to validate that the bulk OSL signal is dominated by quartz. This can be performed by using elemental composition characterized through portable X-ray fluorescence spectrometers [39].
Quartz OSL sensitivity (BOSLF) measured in polymineral fine-grained sediments (silt) can also be applied in provenance analysis, e.g., [23]. A recent example of a successful application of OSL sensitivity for provenance analysis comprised measurements in silt of a marine sediment core [30]. Marine sediment cores are one of the most commonly used archives for the reconstruction of past climatic and oceanographic changes, e.g., [40,41,42,43,44]. The OSL sensitivity represented by the percentage of the initial (1 s) light emission in relation to the total OSL emission (%BOSLF) was used to track changes in precipitation over the Parnaíba River watershed in Northeastern Brazil [28], where higher values of sensitivity resemble with moments of increased precipitation (i.e., Heinrich Stadials 2 and 1, and the Younger Dryas) [36]. Our data show that BOSL sensitivity measured at room temperature (BOSL20°C) in silt samples of core GeoB16206-1 can be used in the same way as the BOSLF signal with stimulation at 125 °C (Figure 3 and Figure 5). This allows us to increase data resolution through in situ measurements and to couple the provenance analysis of different grain-size fractions (silt and sand), using a single mineral component (quartz). Provenance analysis based on a single and chemically resistant mineral type avoids spurious effects associated with hydraulic sorting during sediment transport or with compositional changes due to weathering or diagenesis.
Therefore, the quartz OSL sensitivity measured without preheating and using blue light stimulation at room temperature after a given dose is recommended for provenance analysis of quartz. Future research can evaluate the use of other ionizing radiation sources, such as portable X-ray sources, and test in situ OSL-sensitivity measurements, using a similar approach as employed, for example, in bulk sediment geochemistry, using X-ray fluorescence. In this case, it is also necessary to improve protocols to measure quartz OSL signals in polymineral material, especially in the presence of feldspar [37], but without the use of thermal treatments.

A.O.S. conceptualized the research, prepared the manuscript draft, and raised funding. F.C.G.R. carried out experiments and data analysis with the help of T.D.M., V.R.M., and D.B.M. performed preparation and measurements of marine core sediment samples and discussed the study case. C.M.C. contributed with applications to marine sediment cores. P.C.F.G. supervised heavy mineral analysis and raised funding. All authors contributed with revision and editing of the final version of the manuscript.

We thank Fabiano Pupim and Ian del Río for providing sediment samples of Pantanal and Chile, respectively. We also acknowledge the GeoB Core Repository at MARUM-University of Bremen for supplying samples (core GeoB16206-1) used in this study.

The funders had no role in the design of the study; in the collection, analyses, or interpretation of data; in the writing of the manuscript; or in the decision to publish the results. 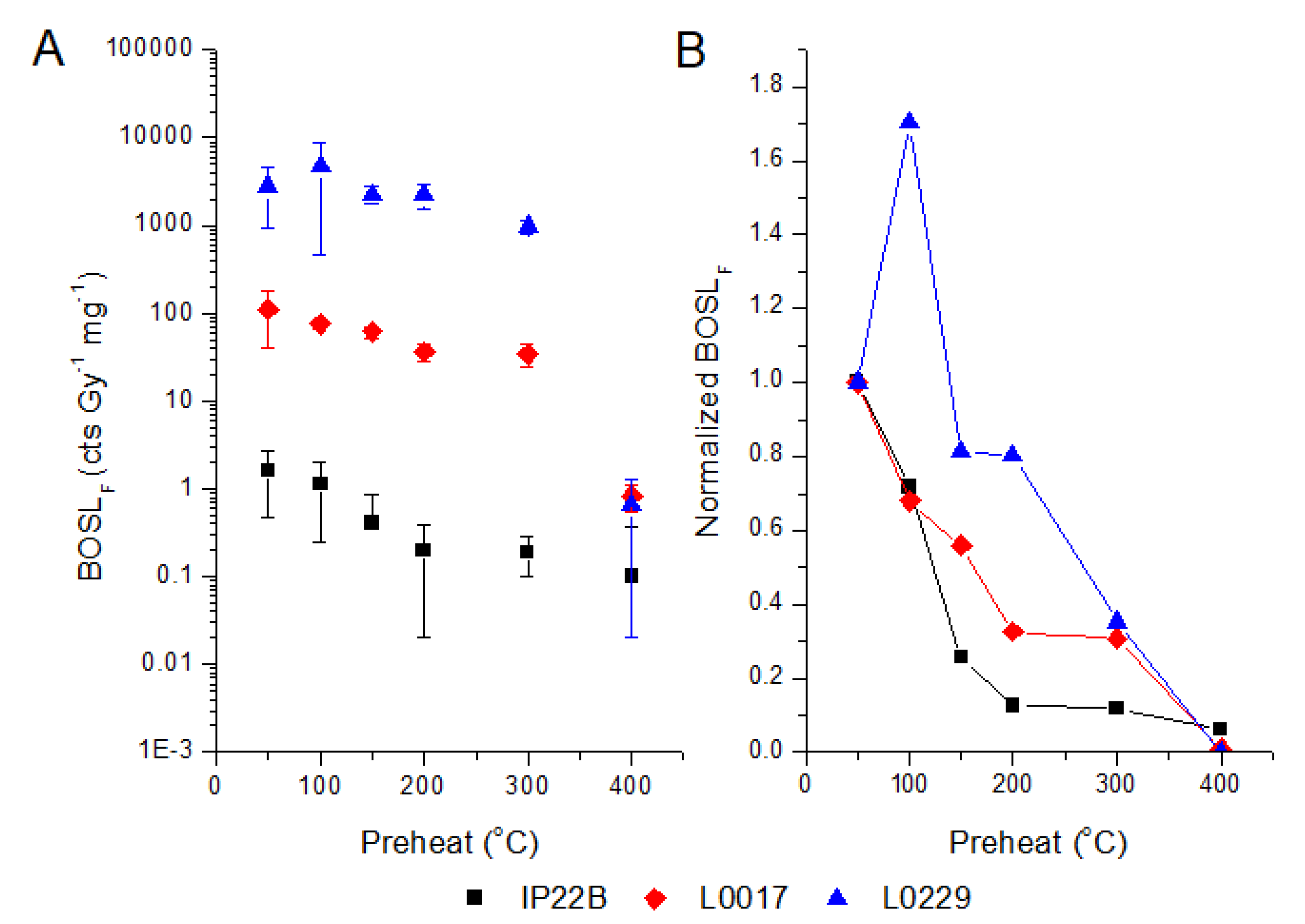 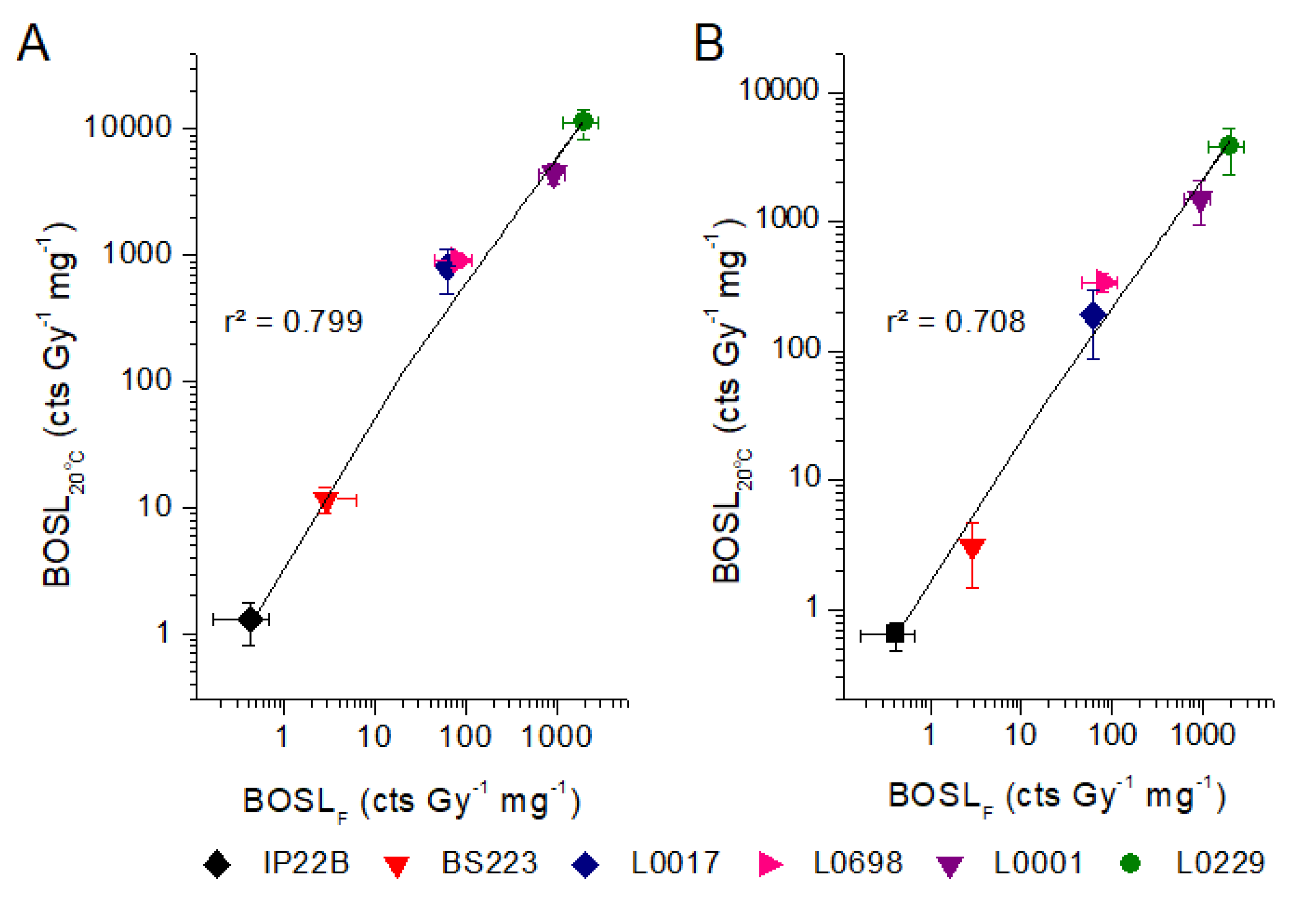 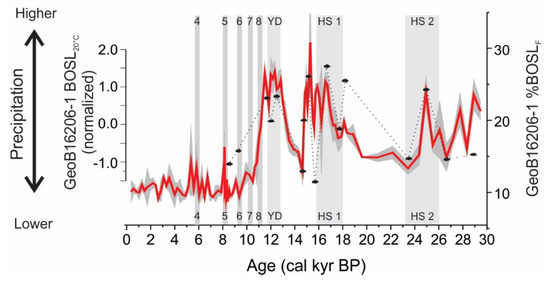 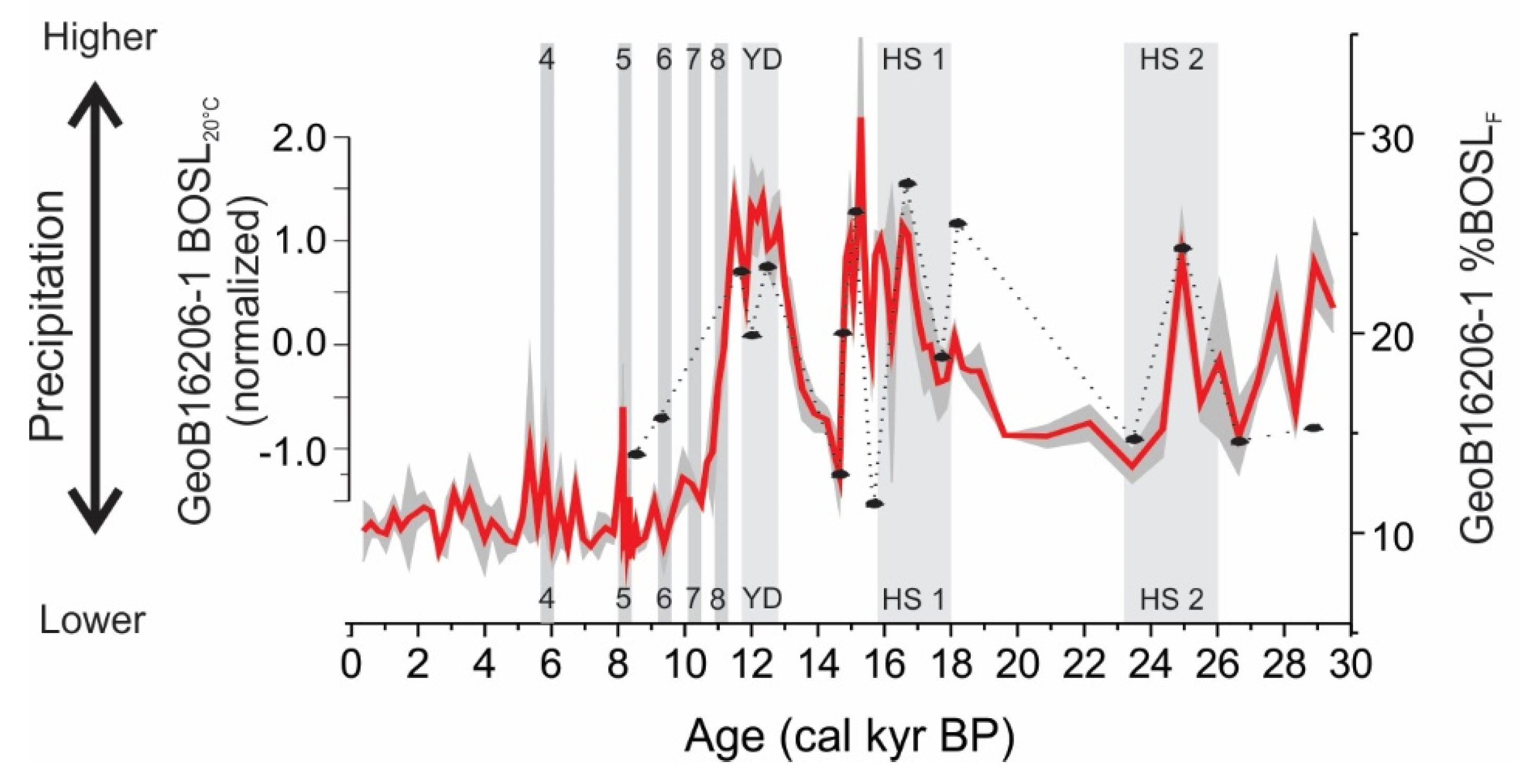