A Visit with Dr. Louis Woolf, Recognizing His 100th Birthday and His Contributions to the Diagnosis and Treatment of Phenylketonuria

Newborn screening for Cystic Fibrosis has been implemented in most programs worldwide, but the approach used varies, including combinations of immunoreactive trypsinogen (IRT) and CFTR mutation analysis on one or more specimens. The British Columbia (BC) newborn screening program tests ~45,000 infants per year in BC and the Yukon Territory, covering almost 1.5 million km2 in western Canada. CF screening was initiated using an IRT-DNA-IRT approach with a second bloodspot card at 21 days of age for all CFTR mutation heterozygotes and any non-carriers in the top 0.1% for IRT. This second IRT was implemented to avoid sweat testing of infants without persistent hypertrypsinemia, reducing the burden of travel for families. Over nine years (2010–2018), 401,977 infants were screened and CF was confirmed in 76, and a further 28 were deemed CF screen positive inconclusive diagnosis (CFSPID). Day 21 IRT was normal in 880 CFTR mutation carriers who were quoted a very low CF risk and offered optional sweat testing. Only 13% of families opted for sweat testing and a total of 1036 sweat tests were avoided. There were six false negative CF cases (and three CFSPID) due to a low initial IRT or no CFTR mutations. Although one CFSPID case had a normal repeat IRT result, the addition of the day 21 IRT did not contribute to any CF false negatives. View Full-Text
Keywords: cystic fibrosis; newborn screening; immunoreactive trypsinogen; British Columbia; sweat test; false negative; CFTR cystic fibrosis; newborn screening; immunoreactive trypsinogen; British Columbia; sweat test; false negative; CFTR
►▼ Show Figures 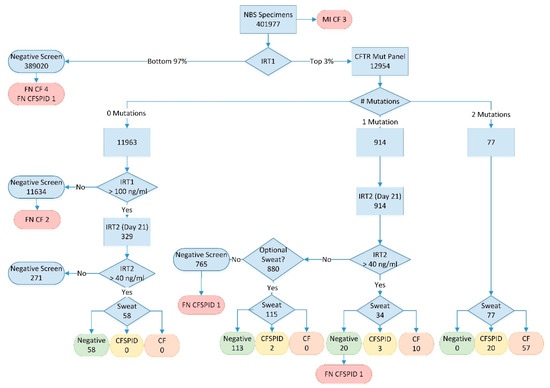