Tyrosinemia type 1 (TT1) is an inborn error of tyrosine metabolism with features including liver dysfunction, cirrhosis, and hepatocellular carcinoma; renal dysfunction that may lead to failure to thrive and bone disease; and porphyric crises. Once fatal in most infantile-onset cases, pre-symptomatic diagnosis through newborn screening (NBS) protocols, dietary management, and pharmacotherapy with nitisinone have improved outcomes. Succinylacetone provides a sensitive and specific marker for the detection of TT1 but is not universally utilized in screening protocols for the disease. Here, we report an infant transferred to our facility for evaluation and management of hyperinsulinism who subsequently developed acute-onset liver, respiratory, and renal failure around one month of life. She was found to have TT1 caused by novel pathogenic variant in fumarylacetoacetate hydrolase (c.1014 delC, p.Cys 338 Ter). Her NBS, which utilized tyrosine as a primary marker, had been reported as normal, with a tyrosine level of 151 µmol/L (reference: < 280 µmol/L). Retrospective analysis of dried blood spot samples via tandem mass spectrometry showed detectable succinylacetone ranging 4.65–10.34 µmol/L. To our knowledge, this is the first patient with TT1 whose initial presenting symptom was hyperinsulinemic hypoglycemia. The case highlights the importance of maintaining a high suspicion for metabolic disease in critically ill children, despite normal NBS. We also use the case to advocate for NBS for TT1 using succinylacetone quantitation.
Keywords: tyrosinemia type I; hereditary tyrosinemia; newborn screening; succinylacetone; Tyrosine tyrosinemia type I; hereditary tyrosinemia; newborn screening; succinylacetone; Tyrosine

Gentz and colleagues first described tyrosinemia in 1965 in a cohort of children with liver failure, cirrhosis, and renal dysfunction with high levels of tyrosine in their urine and plasma [1]. The defect was later found to arise from decreased fumarylacetoacetase (fumarylacetoacetate hydrolase; FAH) activity, resulting in toxic accumulation of tyrosine metabolites fumarylacetoacetate and succinylacetone (SUAC) [2]. Worldwide, the incidence of tyrosinemia type I (TT1, hereditary tyrosinemia, FAH deficiency; MIM #276700) is about 1:100,000 births [3], with increased incidence in certain populations across the globe [4], most notably in Quebec [5] and Scandinavia [6,7].
Untreated, TT1 was often fatal secondary to liver pathology, including liver failure, recurrent bleeding, or hepatocellular carcinoma (HCC), or to neurologic crises [8,9]. Among children who presented symptomatically prior to 2 months of age and managed only with dietary restriction of tyrosine and phenylalanine, 2-year survival rates were 29%, while 2-year survival rates were 74% for those who presented between 2 and 6 months of age [9] Despite this improvement in short-term survival, all children presenting prior to 6 months of age had died by 12 years of age if they had not undergone liver transplantation (LT) [9]. The majority of TT1 cases present prior to 6 months of age, with variable periods of time between symptom onset and diagnosis [9]. Among children presenting after 6 months of age, 2-year survival rates were 96%. However, even in this latter group 4/10 children did not survive to their 10th birthday [9]. LT improves survival rates by correcting liver pathologies but is not free from accompanying morbidity and mortality. Five-year survival rates for LT in TT1 have ranged from 70% (7/10) in patients studied 1981–1987, prior to the availability of pharmacotherapy [10] to 90% (113/125) in patients studied 1987–2008 [11]. In the former study, all but one patient was managed with dietary restriction prior to LT. In the latter study, there was no improvement in survival over time [11], suggesting against improved outcomes due to the introduction of pharmacotherapy or screening practices alone.
In 1992, Lindstedt and colleagues reported successful use of the 4-hydroxyphenylpyruvate dioxygenase inhibitor 2-(2-nitro-4-trifluoromethylbenzoyl)-1, 3-cyclohexanedione (NTBC; nitisinone; brand-names Orfadin or Nityr) in the treatment of 5 patients with TT1 [12]. Compared with both late (after one month of age) or no therapy, the Quebec NTBC Protocol showed that early (prior to one month of age) initiation of NTBC eliminated acute manifestations of TT1 and reduced the need for LT with only rare side-effects—most notably, corneal deposits [13]. A French study showed similarly-improved outcomes with NTBC therapy in 45 patients followed for an average of 4 years 9 months, but notably reported one infant who did not respond to NTBC [14]. The Gothenburg NTBC Trial found 6 patients (10%) failed to clinically improve on NTBC [15]. Presently, NTBC pharmacotherapy in conjunction with a protein-restricted diet are standard of care for patients diagnosed with TT1 [16,17].
It is important to note that the effects of pre-symptomatic NTBC initiation are difficult to separate from the effects of initiation at the onset of symptoms in studies with patients spanning multiple decades during which the standard of care for TT1 management has changed dramatically and for which long-term follow-up has not been possible. However, it remains widely accepted that pre-symptomatic diagnosis of TT1 plays an important role in preventing morbidity and mortality, making a robust newborn screening (NBS) protocol for the disease desirable [16,17,18]. Experience in Quebec showed that no patients detected by NBS and treated according to the study protocol developed HCC, renal disease, or neurologic crisis with follow-up periods exceeding 10 years [13,19]. In 6 patients not identified by NBS due to either birth outside of Quebec or screening failure, 4 required LT, despite the initiation of NTBC following diagnosis [13]. When 12 children in the UK were tested for TT1 at birth and initiated on NTBC at an average age of four days, none demonstrated laboratory or imaging evidence of liver pathology at 8.5 years follow-up [20]. Authors concluded that NBS for TT1 should be universal [20]. In Spain, 7/8 patients diagnosed via NBS at an average age of 12.7 days and initiated on NTBC pre-symptomatically remained liver- and renal-disease free at an average follow-up time of 6.1 years [21]. The remaining patient presented in acute liver failure, but also remained liver- and renal-disease free at the time of follow-up [21]. While there was no difference in poor hepatic outcomes between patients diagnosed via NBS and those diagnosed clinically (p-value of 0.06), there was a difference in cognitive outcomes, with the latter group demonstrating lower IQs or psychomotor developmental indices on average (p-value 0.009) [21].

As early as 1977, SUAC was recognized to be present in fresh urine samples from patients with TT1 [2]. Authors found no SUAC in samples from either healthy patients or those with a variety of non-TT1 illnesses, including severe liver disease [2]. As the compound is not an intermediate of any known metabolic pathway, this work provided the first clue that SUAC might prove to be a useful screening marker for TT1 [2]. Today, the presence of blood SUAC is considered pathognomonic for a TT1 diagnosis.
In 1982, measurement of SUAC in amniotic fluid permitted prenatal diagnosis of TT1 [22] and the same group simultaneously published on the utility of gas chromatography/mass spectrometry in screening dried blood spots for patients with TT1 [23]. Such methods relied on indirect SUAC quantitation following enzymatic inhibition of δ-aminolevulinic acid dehydratase. Schulze et al. suggested the assay more optimal for second-tier screening as false-positive results could be obtained in the setting of high temperatures, genetic differences in enzyme activity, or theoretically lead exposure [24] While indirect SUAC quantitation was utilized in Quebec’s NBS program as a second-tier test following tyrosine quantitation 1970–1997 and as a first-tier test 1998–2014 [23,25], it was not more widely adopted. In 2004, Allard and colleagues developed a method allowing direct SUAC quantitation from dried blood spots using tandem mass spectrometry (MS/MS) [26]. Shortly thereafter, methods allowing quantitation of SUAC combined with amino acids and acylcarnitines were developed, which helped to improve screening efficiency by reducing the need for additional laboratory preparation or equipment [27]. Quebec transitioned to direct SUAC quantitation via MS/MS as the primary marker in TT1 screening in 2014 [25]. Since then, 14/14 TT1 cases were identified by NBS with 5 false positive results, yielding a sensitivity of 100% and a positive predictive value of 73.6% [25].
Tyrosine-dependent methods have both poor sensitivity and specificity for FAH deficiency, depending on screening thresholds values. Greater than half of TT1 patients have NBS tyrosine levels that fall within the control range [28] La Marca and colleagues reported two infants with TT1 diagnoses who demonstrated normal tyrosine levels and were identified through SUAC-based testing methods [29,30]. However, given the degree of overlap in tyrosine levels between cases and controls [28], it is likely that the true incidence of cases unidentified by tyrosine-based screening is higher. The sensitivity of TT1 screening using SUAC detection was 100% across five studies [26,27,30,31,32] involving 29 cases and over 35,000 controls systematically reviewed by Stinton et al., although each study employed a slightly different SUAC cutoff [33]. Specificity is also reported as approaching 100% [26,27,30,32]. In Quebec, following introduction of SUAC as a first-tier screening test in 1998, 67/67 infants with TT1 were identified by their screening protocol [25]. In 2013, a group of European and Canadian expert clinicians recommended that SUAC be the primary marker for TT1 screening [17]. They were echoed in a North American consensus statement in 2017 [16].
There has been inconsistent implementation of effective NBS for TT1 in the United States, despite the condition being included in the Recommended Uniform Screening Panel (RUSP) since its inception in 2006 [18]. Major challenges to implementing SUAC testing into routine NBS in the US include lack of funding, need for additional laboratory staff and instrumentation, limited physical laboratory space, and concerns about assay validity [28]. Outside of Quebec, the earliest SUAC testing implementation reported was 2007 [28]. By 2014, 38 states included testing of SUAC as a marker of TT1 in their NBS protocols [28]. As of March 2020, there remain 3 states that have not incorporated SUAC quantitation in their NBS approach: Maryland, Oklahoma, and West Virginia.
Here, we present the case of an infant presenting with hyperinsulinemic hypoglycemia and subsequently critically ill with multiorgan failure, found to have TT1 caused by a novel pathogenic variant in FAH (c.1014 delC in exon 12; p.Cys 338 Ter) that was missed by NBS utilizing tyrosine quantification as the first-line disease marker. We detail the ensuing diagnostic odyssey and morbidity resulting from post-symptomatic diagnosis.

Here, we report the case of an infant presenting with hyperinsulinism and developing multi-organ failure who harbored a novel homozygous pathogenic nonsense mutation in FAH (c.1014 delC; p.Cys 338 Ter) consistent with TT1. This was not identified via NBS, which relied on tyrosine rather than SUAC quantitation. Her resulting morbidity underscores that SUAC should be the universal first-line marker for NBS for TT1. The case also illustrates that NBS is important, but not infallible. Medical teams must keep a broad differential diagnosis even in the setting of a seemingly reassuring NBS. We also remind clinicians that neonates with TT1 can present with hypoglycemia and meet clinical criteria for hyperinsulinism.

J.R.C.P., H.A., K.P.C., H.G., I.P.-W., L.S., C.F., R.D.G., and R.C.A.-N. all contributed to conception of this work, acquisition, analysis, and interpretation of clinical data, drafting and revising of this manuscript. All authors have read and agreed to the published version of the manuscript.

We appreciate this patient and her family for allowing us to learn from her case. We also gratefully acknowledge the help of the New Jersey Newborn Screening Laboratory in re-analysis of this patient’s dried blood spots for the preparation of this manuscript. 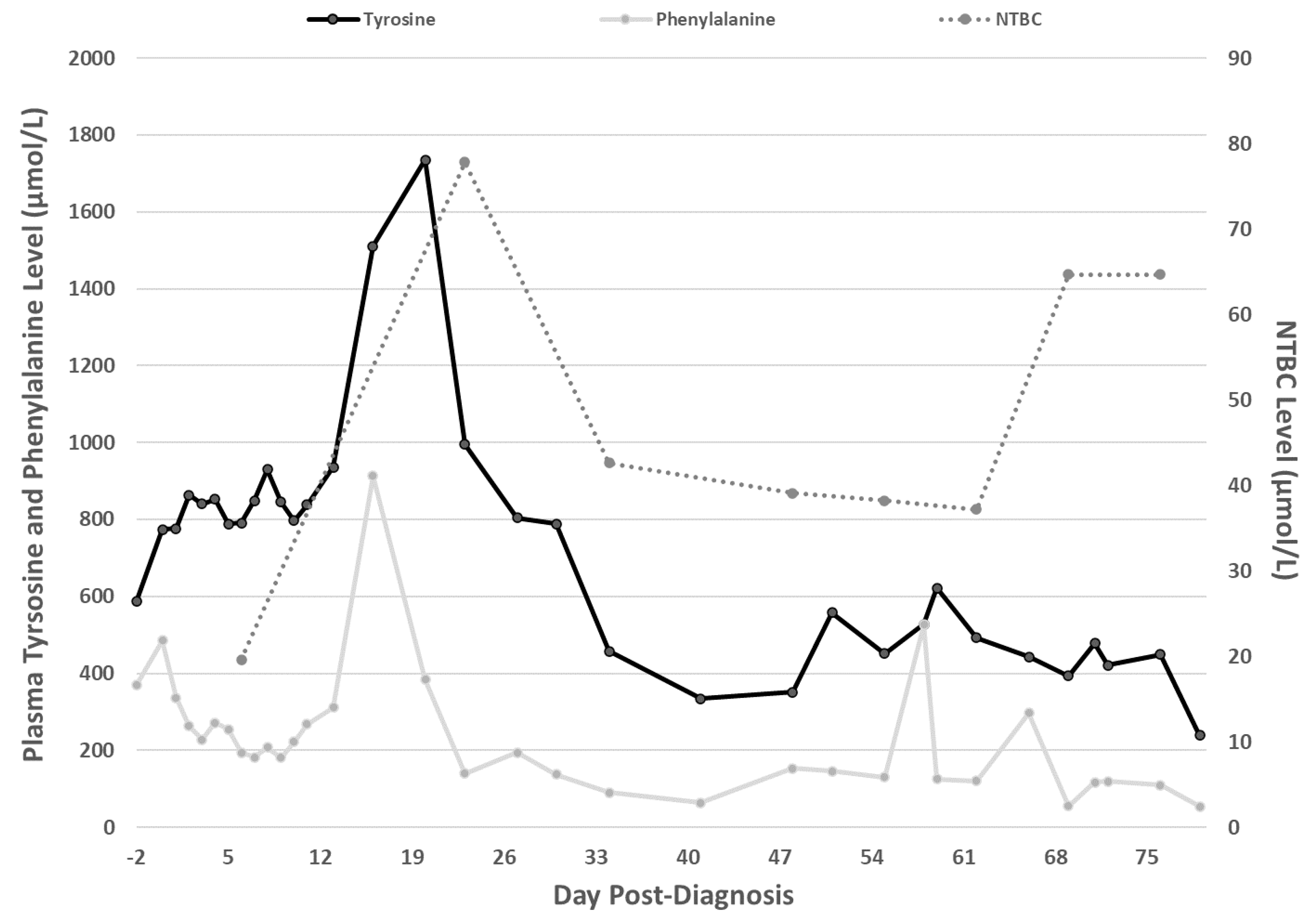