Feasibility of Early Evaluation for the Recurrence of Bladder Cancer after Trans-Urethral Resection: A Comparison between Magnetic Resonance Imaging and Multidetector Computed Tomography

Along with systemic therapies, radiation therapy (RT) plays an integral role in treating advanced lung cancer. However, the incidence of RT-induced cardiac complications in this patient population is as high as 33% [1,2,3]. Recent studies suggest that radiation-induced cardiac damage can manifest within two years of completing RT for lung cancer [1,4,5,6,7,8,9] and that mortality correlates with mean heart dose [4] or with the percentage of the heart receiving 5 Gy [10], 30 Gy and/or 50 Gy [8]. A national multicenter lung cancer trial and other single-institution studies have found correlations between early death and radiation dose to the heart [11]. Interestingly, many trials have not been able to correlate early deaths with clinically evident cardiotoxicity, suggesting that early non-cancer deaths may be partially due to subclinical cardiac dysfunction.
The current paradigm for cardiac function assessment and management of cardiovascular disease relies primarily upon the assessment of global cardiac function, e.g., left ventricle ejection fraction (LVEF) [12,13]. However, LVEF alone is limited in its diagnostic and prognostic ability, as ventricular remodeling can compensate for regional cardiac dysfunction to maintain global function and cardiac output in acute and subacute phases post-RT before LVEF ultimately declines [14,15,16]. Thus, LVEF may be stable or even increases after radiation exposure due to compensatory mechanisms [16]. Therefore, identifying new markers capable of early detection of subclinical cardiac dysfunction after cardiac RT exposure is essential for risk stratification and prompt initiation of cardioprotective heart therapy to avoid non-reversible late cardiac damage [17].
Magnetic resonance imaging (MRI) tagging [18] allows for quantitative assessment of myocardial contractility on a regional basis. As regional changes in myocardial contractility frequently occur before cardiac damage [14,15], regional cardiac dysfunction is potentially reversible, and myocardial strain-derived parameters can be early indicators of cardiotoxicity. This has been demonstrated in studies where MRI-generated strain parameters detected abnormal myocardial function in cancer patients treated with chemotherapy, despite normal systolic function [19,20,21,22,23,24,25]. Recent results from our preclinical work identified heterogeneous contractility patterns in different LV regions with reduced myocardial strain post-RT [15,16].
In this study, we investigated the capability of advanced MRI-generated parameters of heart mechanics for characterizing the myocardial contractility patterns post-RT and for early detection of RT-induced cardiotoxicity in a pre-clinical rat model of radiation-induced cardiotoxicity. We present the contractility index (ContractiX) derived from regional strain parameters. We hypothesize that ContractiX is a sensitive marker for early detection of RT-induced cardiotoxicity. We also examined the effect of RT on other MRI-generated heart contractility parameters, including ventricular torsion, diastolic strain rate, and mechanical dyssynchrony.

The cine images were analyzed using the cvi42 (Circle Cardiovascular Imaging, Calgary, Canada) software to measure left ventricle (LV) end-diastolic volume (EDV), end-systolic volume (ESV), stroke volume (SV), EF, and mass. The tagged images were analyzed using the SinMod [28] technique (InTag, Lyon, France) to measure myocardial circumferential, radial, and longitudinal peak-systolic strains (Ecc, Err, Ell) in different LV segments based on the American Heart Association (AHA) 17-segment model. The reproducibility of the SinMod technique has been previously shown by our group [29]. Strain analysis in this work was conducted three times: twice by the same observer with >2 months between the two analyses to assess intra-observer variability; and once by another observer to assess inter-observer variability. For clarity of presentation, strain measurements are presented in absolute value (i.e., circumferential and longitudinal strain measurements, which are originally negative due to tissue contraction in these directions during systole, are represented by their absolute values).

Ventricular torsion, another parameter of systolic function, was measured as the difference between basal and apical rotation angles at peak systole divided by the distance between the basal and apical slices. Besides systolic function, early-diastolic strain rate (SR) was calculated in different directions (SR-cc (circumferential), SR-rr (radial), SR-ll (longitudinal)). For presentation clarity, diastolic SR measures are represented in absolute values. Finally, to assess myocardial mechanical dyssynchrony, the standard deviations of time-to-peak (TTP) systolic strain between different myocardial segments, based on the AHA 17-segment model, were calculated in different directions (TTP-cc, TTP-rr, TTP-ll).

All measurements were represented as mean ± standard deviation (SD). ANOVA analysis with the Tukey post hoc test was conducted for multiple comparisons between different rat groups. Spearman correlation analysis was conducted between ContractiX and LVEF. p < 0.05 was considered significant. Bland-Altman analysis [30] was conducted to assess intra-observer and inter-observer variabilities in the generated measurements.

3.1. LVEF and Mass Are Increased Post-RT

The results from this study characterize the effect of RT on myocardial contractility patterns and demonstrate the value of the newly defined ContractiX parameter as a sensitive early marker of subclinical cardiac dysfunction post-RT, that might be superior to other measures of cardiac function, such as LVEF and strain, if proved by further studies.

The study was approved by the Medical College of Wisconsin institutional animal care and use committee (IACUC). (Protocol code: AUA00004200 and date of approval: 18 August 2021).

Study data is available upon request from the corresponding author. 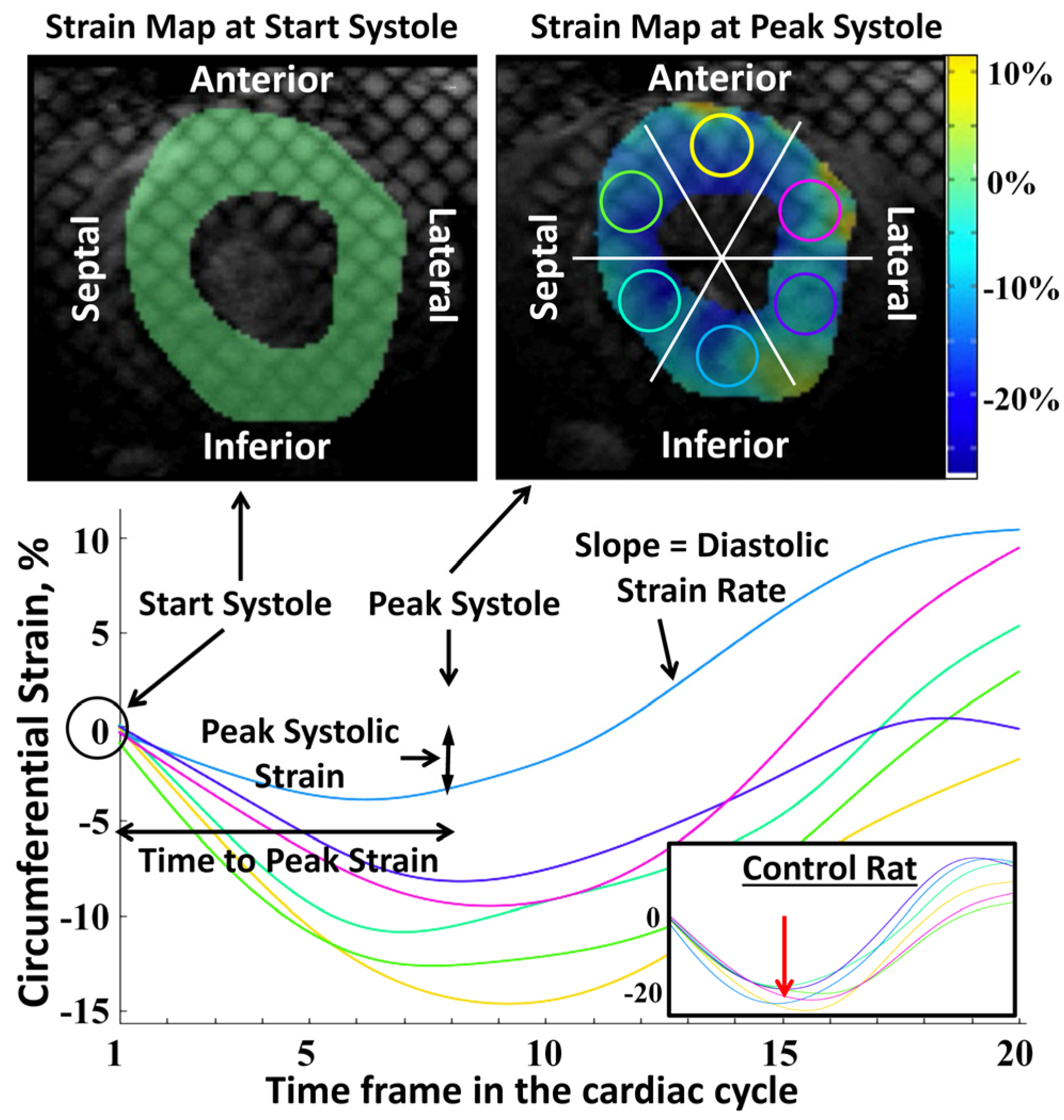 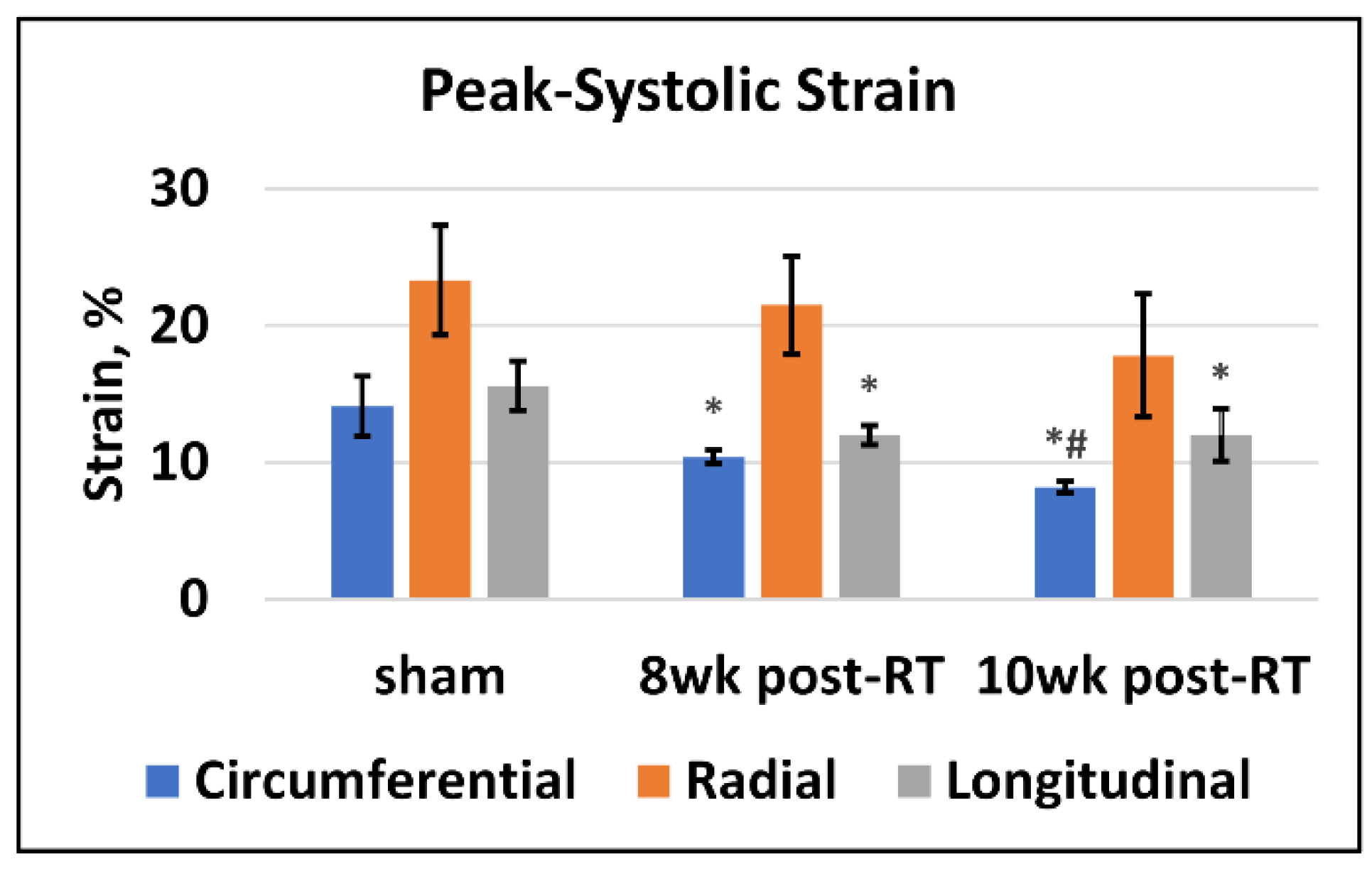 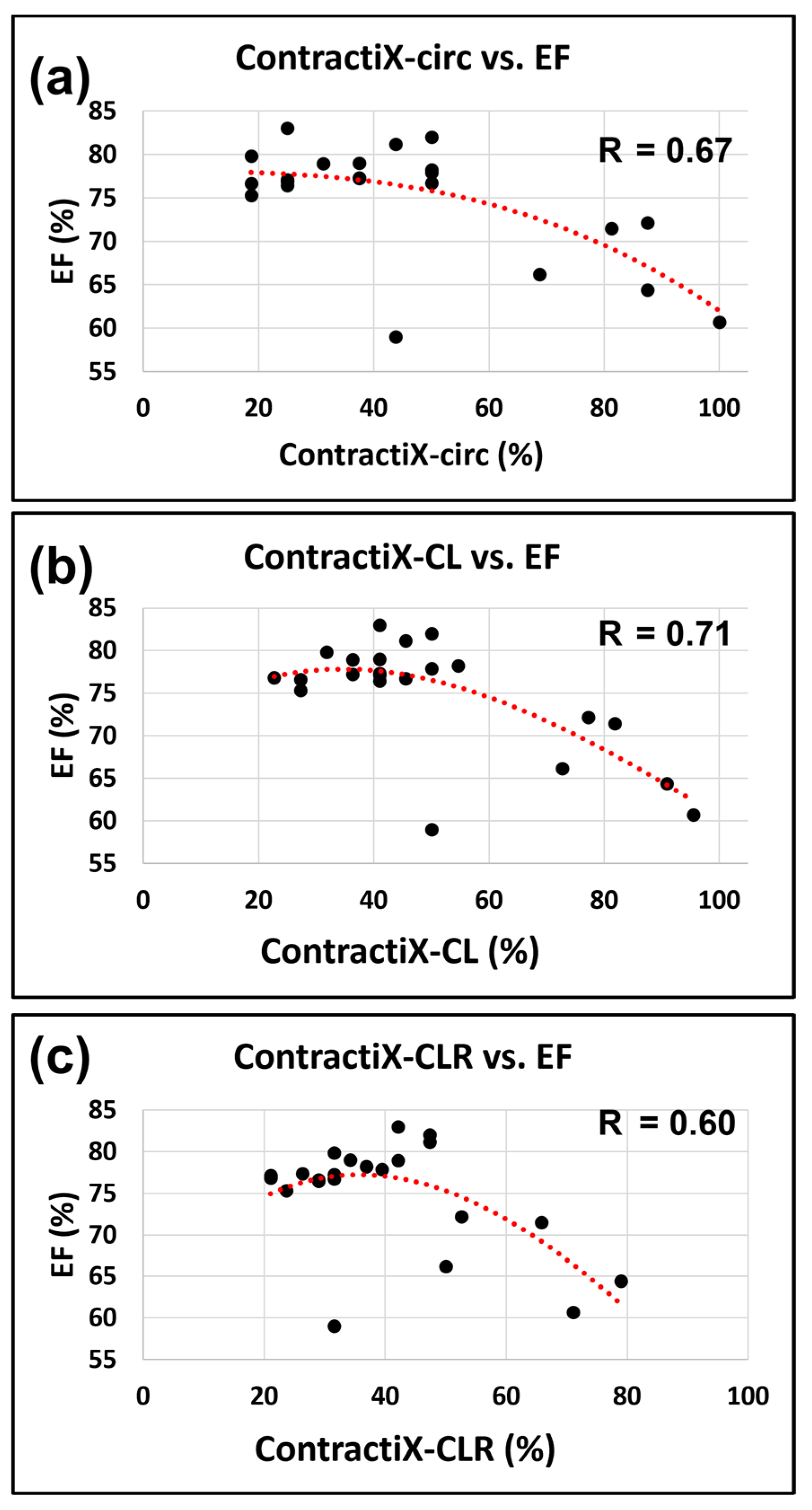