Temporal lobe venous drainage is important in various neurosurgical procedures and combined skull base approaches [1]. The most important draining vein of the temporal lobe is the inferior anastomotic vein (Labbé’s vein, LV) [1]. During fetal development, the LV, an anastomosis between the middle and inferior cerebral veins, is identifiable at 20 weeks; the superior anastomotic vein (vein of Trolard), which connects the superior and middle cerebral veins, appears after 30 weeks [2].
The superficial middle cerebral vein, or superficial sylvian vein (SV), drains most of the lateral surface of the cerebral hemisphere and follows the lateral (sylvian) fissure to terminate in the cavernous sinus [2]. The superior anastomotic vein (vein of Trolard) passes between the SV and the superior sagittal sinus, thus, connecting it with the cavernous sinus [2]. Commonly, the veins of Trolard and Labbé are alternatively present, thus, dominant. The LV courses the temporal lobe and connects the SV with the transverse sinus (TS) [2]. Currently, the term LV is used to indicate the largest vein in the lateral aspect of the temporal lobe [3]. It could be regarded as a bridging vein that courses on the temporal lobe between the sylvian fissure and the TS [4]. The intratentorial course of the LV is regarded as a tentorial sinus (TeS) [5]. According to Koperna (1992), the LV can drain in the TS either via a TeS or via a dural lacuna in the external cranial wall, placed superior to the TS [5]. However, Tubbs (2012) identified only the direct drainage of the LV in the TS [6].
Little attention has been paid to superficial anastomotic veins in studies, although severe postoperative complications may be caused by an iatrogenic venous injury during intracranial surgery [7,8]. The importance of LV topography is related to skull base approaches and medial tentorial lesions, resulting in posterior temporal approaches [7]. Clinicians, students and teachers should pay attention to individual anatomical characteristics, including different manifestations of variability [9]. Understanding the anatomy of the anastomotic veins is of major importance for neurosurgical procedures [10].
Based on the hypothesis of the existence of as yet unidentified anatomical possibilities of the LV, through this research, in a batch of retrospective computed tomography angiograms (CTAs), we aimed to document the superficial venous topographic patterns at the lateral and inferior surfaces of the temporal lobe.

The distribution of genders was homogenous for each variant, with no association found to be statistically significant (see Table 1).
Type 0, an absent LV, was identified as follows: in 3/50 cases (6%), two male and one female, the LV was absent bilaterally. Type 0 was identified unilaterally on the right side in five specimens, four male and one female. Unilateral type 0 was evident on the left side in five different cases, two male and three female.
Type 1, a temporal LV, was not found bilaterally in any case in the documented batch. It was found unilateral in 6/50 cases (12%), with equal left–right prevalence (3 cases on each side); on the right side in 2 male cases and 1 female case, and on the left side in 2 female cases and 1 male case.
Type 2, intermediate or temporoparietal, was present bilaterally in 23/50 cases (46%) and unilaterally in 18/50 cases (36%). Unilateral presence was found in 14/50 cases on the right side and in 4/50 cases on the left side. The presence of a right LV type 2 was significantly associated with the presence of a left LV type 2 (Pearson Chi2 = 4.667; p = 0.031; see Figure 1). Briefly, the bilateral symmetry of the LV type 2 was statistically significant.
Type 3, posterior or parieto-occipital, was present bilaterally in 4/50 cases (8%), one male and three female. This type was present unilaterally in 16/50 cases (32%), on the right side in 4 cases, 2 male and 2 female, and on the left side in 12 cases, 10 male and 2 female.
In a male case, we found a topographic type 2 of the left LV. Interestingly, it was not draining into the TS, but had a pathway across it contiguous with branches in the occipital dura mater and tentorium (Figure 2).
In 12/50 cases (24%), duplicate LVs were found in 7 male and 5 female cases. Of these, one male case had a complete bilateral LV duplication (2%); its morphology had bilateral symmetry, consisting of a combination of types 1 + 3: (a) an anterior LV, type 1 temporal, draining into a wide TeS, but continuing to terminate in the confluence of sinuses; and (b) a posterior LV, type 3, posterior or parieto-occipital, draining convergently with the anterior one only into the TeS on that side (Figure 3). We found unilateral duplications in 11 cases, 2 on the right side and 9 on the left side. A right duplicated LV was present only in male cases. A left duplicated LV was identified in four male and five female cases. Unilateral duplication was either complete (Figure 4 and Figure 5), with distinct terminal drainage or incomplete (Figure 6 and Figure 7), with terminal drainage through a common trunk (Table 2). One female case had a complete type 2 + 3 duplication of the left LV, but the anterior type 2 component also had a secondary partial duplication (Figure 8).
In a male case, we identified on the right side a quadruplicated LV (Figure 9). The four veins descending laterally and then inferiorly from the temporal lobe formed a palisade from anteroinferior to posterosuperior, corresponding in this sequence to the 1-2-2-3 LV types defined in this study. The first two connected distally to a TeS, through which they drained into the TS. The latter two drained through the dural lacunae also into the TS.
After separating the cases into those with duplicated and quadruplicated LVs, as well as the 16 sides with absent LVs (type 0), we recorded the drainage modality for 100 LVs. The drainage was: (i) type A in the TS for 49 LVs, 25 right and 24 left; (ii) type B in the TS for 29 LVs, 13 right and 16 left; (iii) type C in the TS for 21 LVs, 11 right and 10 left; (iv) and in one case (Figure 2), the left LV did not drain into the TS, but dichotomized distally into the tentorial and dural occipital veins.

The anatomy of the vein of Labbé is variable; thus, it should be used to determine personalized neurosurgical and interventional approaches. The vein of Labbé’s course and the number of such veins do not conform to a single pattern. Specific approaches to the tentorium should be performed with caution, as the drainage pattern of the vein of Labbé is individually variable in the posterolateral angle of the tentorium. Tentorial sinuses, if present, should also be evaluated individually, to fit the surgical corridor with their specific topography.

The study was conducted according to the guidelines of the Declaration of Helsinki and approved by the Ethics Committee of “Dr. Bagdasar-Arseni” Emergency Clinical Hospital, Bucharest, Romania (protocol code 2093/1 March 2022). 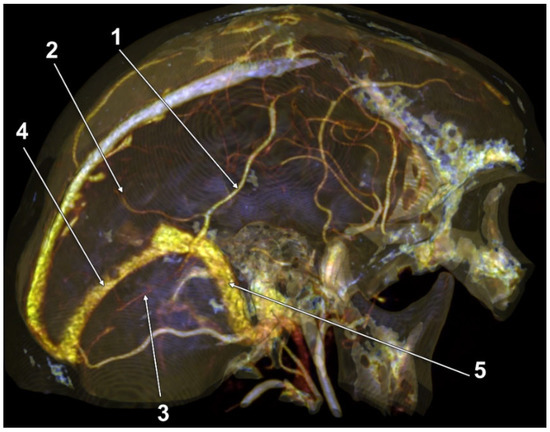 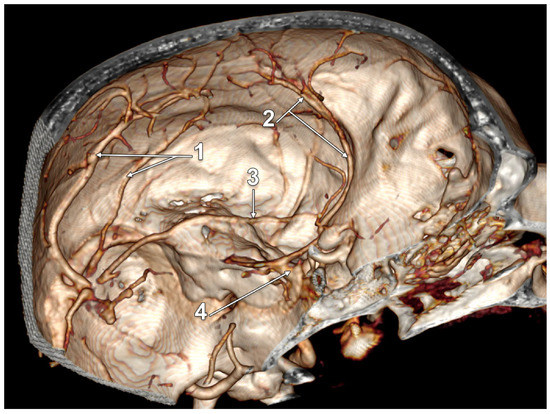 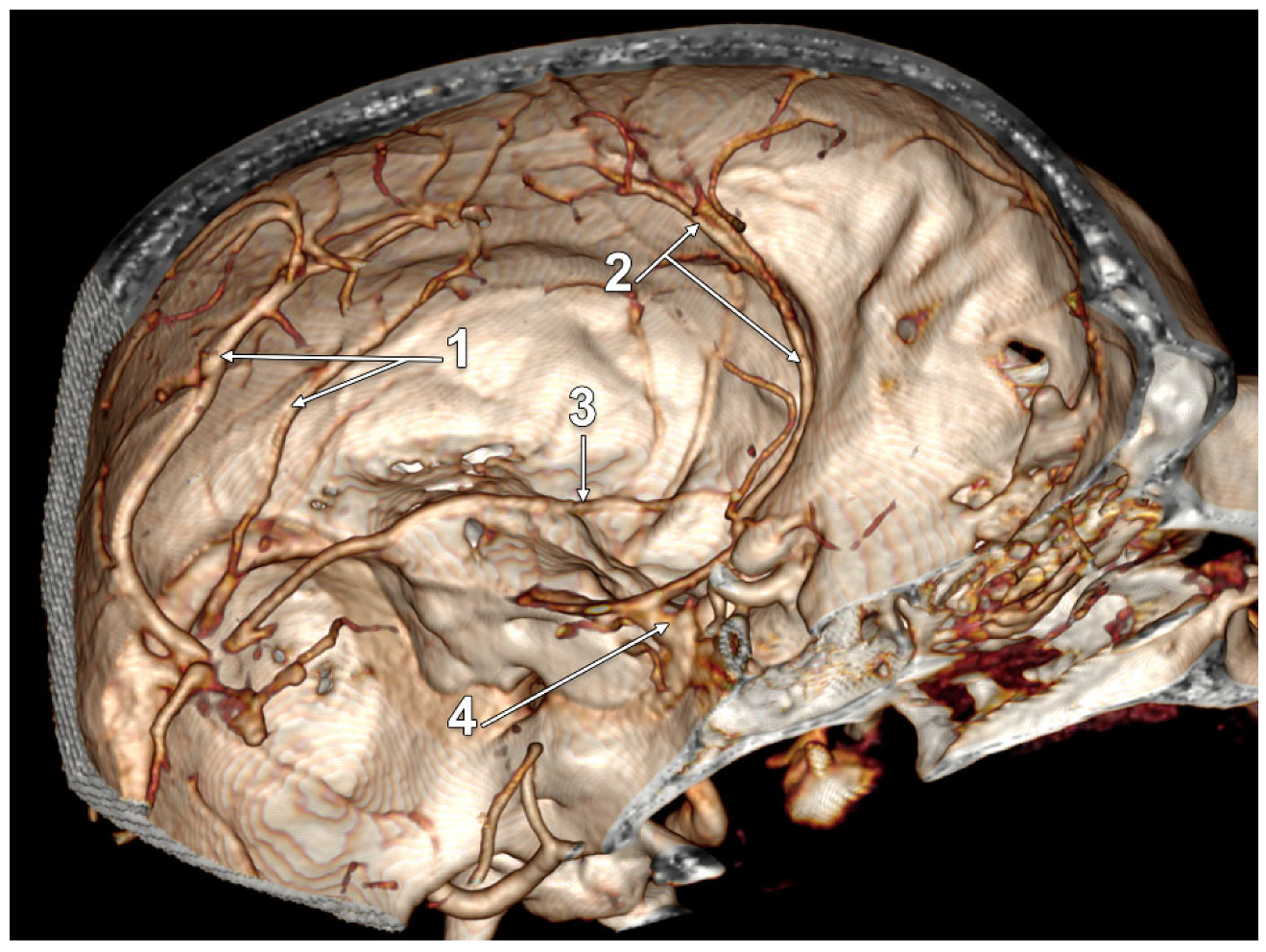 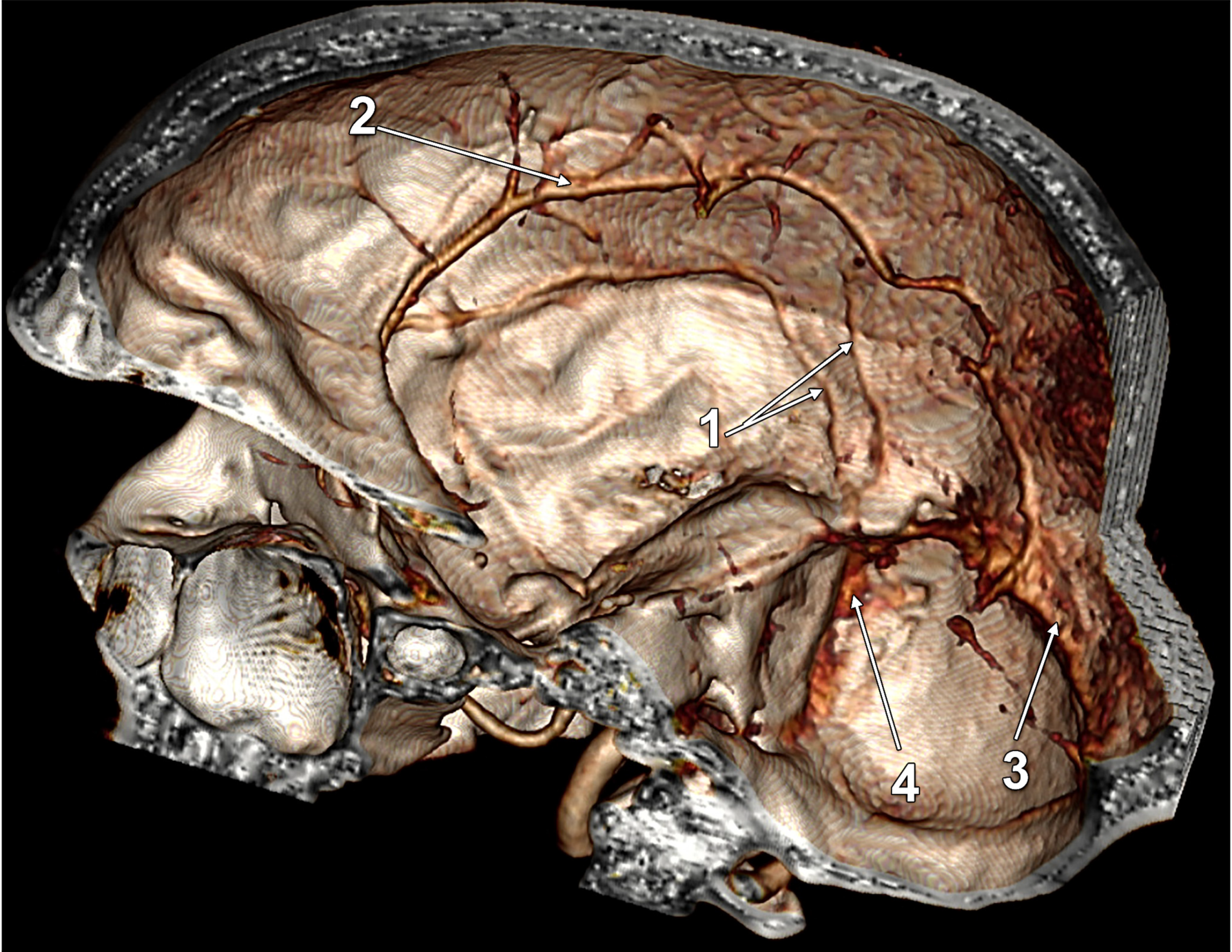 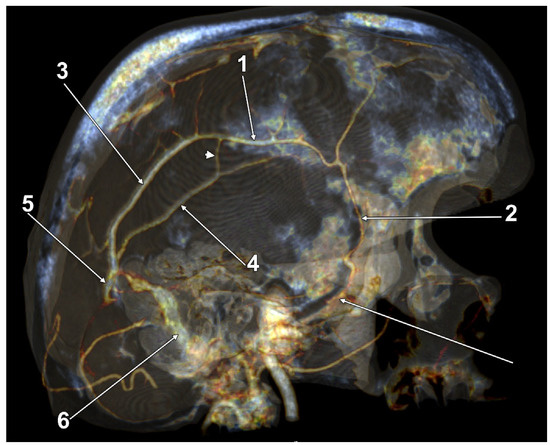 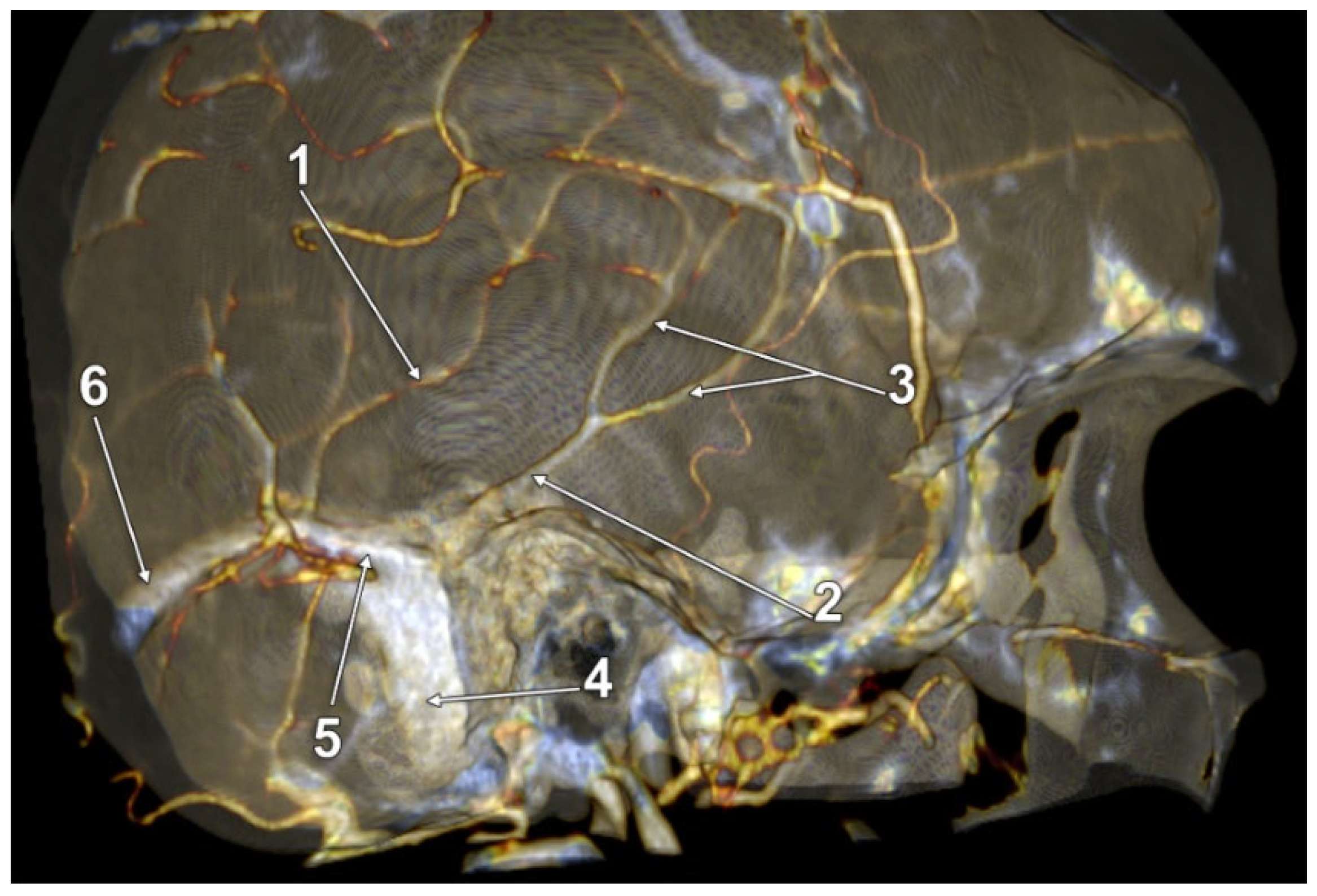 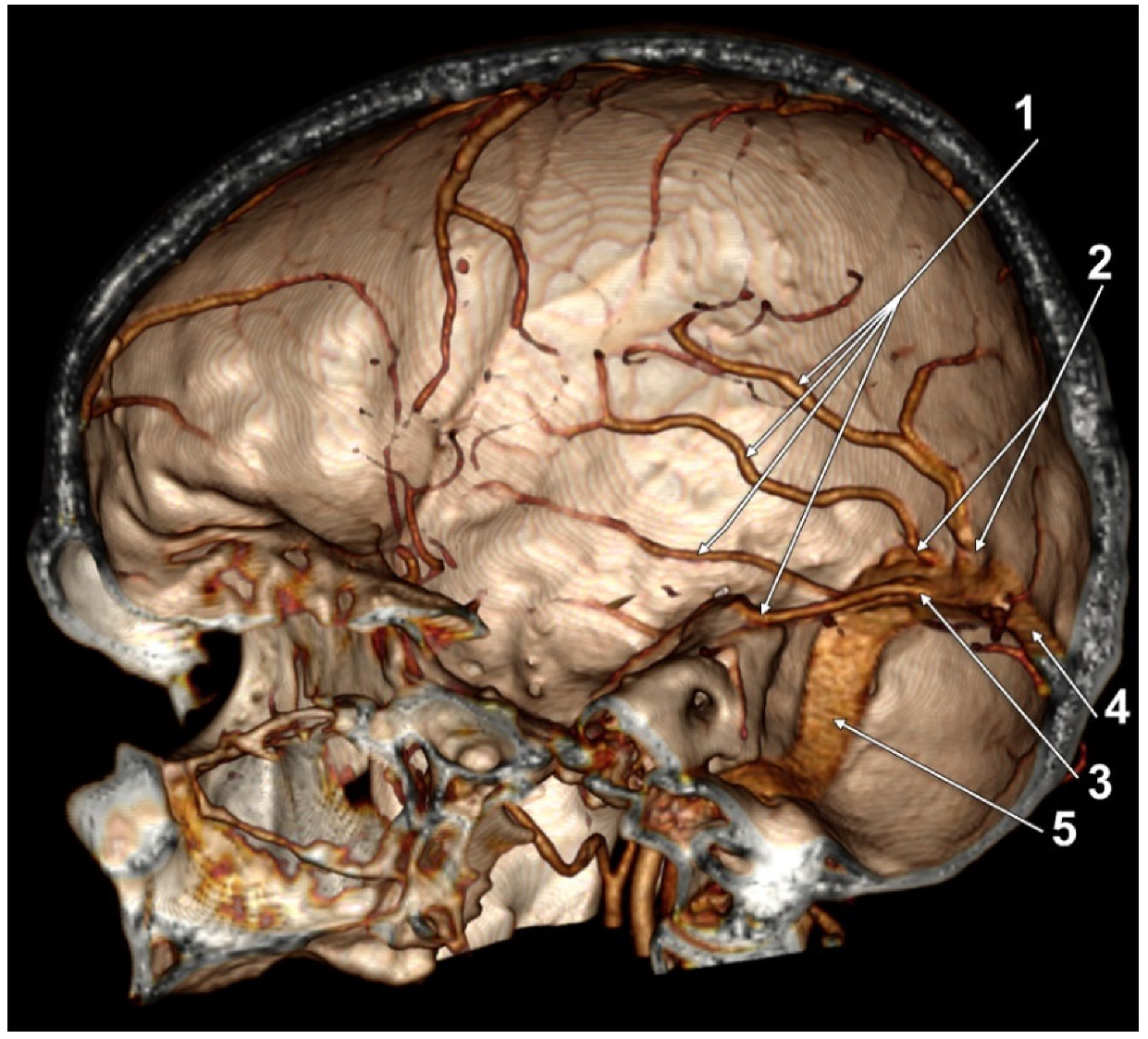