18F-FES PET/CT Improves the Detection of Intraorbital Metastases in Estrogen-Receptor-Positive Breast Cancer: Two Representative Cases and Review of the Literature

Gastric adenocarcinoma is the fifth most frequently diagnosed cancer, and the third cause of cancer-related death. In 2020, over a million new diagnoses of gastric cancer (GC) and 768,000 deaths were estimated worldwide [1]. Surgery remains the only curative treatment for GC, but most patients relapse after surgical resection [2,3,4]. Extended lymph node (LN) dissection improves survival [5], but also increases surgical morbidity and mortality [6,7,8]. A multidisciplinary approach is consequently recommended for locally advanced GC, as perioperative chemotherapy promotes tumor downstaging, and increases progression-free and overall survival (OS) [9]. Adding preoperative radiotherapy may also improve the major pathologic response rate, reduce LN metastases, and improve OS [10,11]. LN metastasis (N stage) is one of the factors most affecting the survival of patients with GC [5,12,13,14,15]. After surgery, patients staged as N0 reportedly had a 5-year OS of 86.1%, which dropped dramatically to 58.1, 23.3, and 5.9%, respectively, in N1, N2, and N3 [13]. Clinical N stage is therefore essential for deciding the appropriate treatment for each patient, such as perioperative chemotherapy and radiotherapy, followed by surgical resection in cases of clinically suspected nodal metastases [16]. The availability of diagnostic tools such as magnetic resonance (MR), CT scanning, and 18F-FDG PET-CT enables accurate disease staging [17]. Moreover, endoscopic ultrasound (EUS) is indicated for assessing T stage and peri-gastric nodal stations [18], but its accuracy is highly operator-dependent, and EUS is not available at all centers [19]. CT is widely used in daily clinical practice for the preoperative staging of patients with GC. Its sensitivity and specificity for detecting LN metastases are in the range of 62.5 to 91.9%, and 50.0 to 87.9%, respectively [17]. The radiological criteria for defining LN metastases are still a matter of debate, however. Previous studies were based on various radiological benchmarks, such as long-axis (LA) or short-axis (SA) diameters, enhancement pattern, or nodal volume [20,21,22,23], but no studies have compared all these parameters.
The aim of our study was to identify and compare dimensional features of loco-regional metastatic LNs in preoperative CT scans by matching the preoperative radiological and histopathological data for every single LN station, in an effort to establish the best dimensional predictor of LN metastases.

2.1. Patient Selection and Definition of Outcomes

This was a retrospective observational study, approved by the local ethics committee (number of protocol 0050680 approved on 10 August 2021). All consecutive patients who underwent curative-intent surgery for GC between 2010 and 2020 were extracted from the prospectively maintained database of our tertiary-level University Hospital. Patients who underwent palliative or non-radical (R2) surgery, those with gastric neoplasms other than adenocarcinoma (e.g., benign, carcinoids, gastrointestinal stromal tumors, etc.), and those with no CT scan available or obtained more than 4 weeks before their surgical procedure were excluded. Demographic and clinicopathological data, and tumor- and therapy-related variables were extracted, including type of surgery, extent of lymphadenectomy (D1 vs. D2), and perioperative treatment (chemotherapy or chemoradiotherapy). Lymphadenectomy was classified as D1 or D2 according to the Japanese Gastric Cancer Association (JGCA) guidelines, 5th edition [24]. Data on postoperative outcome, such as length of hospital stay (LOS), and type of complication according to the Clavien-Dindo classification [25], were included. For each surgical specimen, a dedicated gastrointestinal pathologist reported: site of lesion, tumor size, histological type, grade, total number of LNs harvested, number and sites of metastatic LNs, and stage of disease according to the American Joint Committee on Cancer (AJCC) staging system, 8th edition [26]. LN status was recorded systematically, considering the presence or absence of metastatic nodes for each nodal station, the total number of nodes retrieved in the specimen, the total number of metastatic nodes, and the number of metastatic LNs out of the total number of LNs harvested, or LN ratio (LNR). Pathological margin status was classified as microscopically negative (R0) or positive (R1). All patients underwent a standard oncological follow-up, according to Italian guidelines [27].

All patients underwent a staging CT scan, according to national and international guidelines [16,27], using a 64-slice scanner (Somatom Sensation, Siemens Healthineers, Erlangen, Germany). CT images were acquired before and after intravenous injection of 2 mL/kg of Iohexol 350 mg I/mL (Omnipaque, GE Healthcare, Milwaukee, WI, USA), followed by a 50 mL saline flush. A cranio-caudal image acquisition was used. Technical parameters of CT were the following: 120 kV tube voltage; 300 mAs effective dose; 0.37 sec rotation time; 0.6 mm detector collimation; 0.7 pitch. Slice thickness was 5 mm for unenhanced acquisition and 3 mm for arterial and venous scans. All images analyzed had a soft-tissue reconstruction with a 30B kernel. Arterial scan was acquired 15 s after the achievement of 100 HU within the aortic lumen (bolus tracking technique) and a venous phase of 80 s after contrast administration.
Venous phase images were analyzed on a dedicated workstation (Vitrea2 FX version 6.3, Vital Images, Plymouth, MN, USA). The principal gastric lymphatic stations (paracardial, small and large curve, supra- and sub-pyloric, along left gastric vessels, hepatic artery, celiac trunk, splenic artery, at splenic hilum, retro-pancreatic, and hepato-duodenal) were examined jointly by two abdominal radiologists (with 15 and 5 years of experience), blinded to the pathological diagnosis of the resected LNs. Nodes < 5 mm in maximum size were disregarded. All loco-regional LNs ≥ 5 mm were identified, and their orthogonal axes were measured: the smallest and largest axes on the axial plane were considered as the SA and LA, respectively, while the third measurement obtained was the maximum sagittal axis (Figure 1). The volume of the largest LN per nodal station was calculated according to the formula: SA × LA × sagittal axis × π/6 (mL) (Figure 1).
Five variables per nodal station (the sum of the SAs, the volume, SA, and SA/LA ratio of the largest LN, and the arithmetical average of the SA/LA ratios of all LNs) were recorded in a database. After that, the measurements and the histopathological results of each loco-regional nodal group were reviewed and matched by the two radiologists with the supervision of a dedicated pathologist.

In all, 168 patients were treated surgically with curative intent between 2010 and 2020. Sixty-one were excluded for the purposes of our study, and 107 were enrolled, as shown in the flow-chart (Figure 2). Table 1 shows the patients’ demographic and clinical characteristics. At latest follow-up, 33 (30.8%) patients had experienced a recurrence and 58 (54.2%) had died. Patients’ pathological features are summarized in Table 2.
A total of 443 nodal groups were harvested during surgery and subsequently underwent histopathological analysis: 173 (39.1%) proved to be metastatic, with 69 patients (64.5%) revealing at least one metastatic nodal group (pN+).

From the results of our study, the sum of the SAs of the LNs in a nodal group and in all nodal groups emerged as the best predictors of solitary nodal group metastasis and locoregional node metastasis, respectively, in patients with GC.

F.C., C.Z., G.C. and E.Q. analyzed the CT images and collected the imaging data. Q.R.B., V.M., G.S. and S.P. recorded clinical and histopathological data of the patients. V.M., C.Z. and G.C. reviewed the literature. F.C. and Q.R.B. performed statistical analysis. F.C., Q.R.B., V.M. and G.C. drafted the manuscript. All authors have read and agreed to the published version of the manuscript.

This research received no specific grant from any funding agency in the public, commercial, or not-for-profit sectors.

This retrospective study was conducted in accordance with the Declaration of Helsinki (as revised in 2013) and was approved by institutional ethics committee of University Hospital of Padova (number of protocol 0050680 approved on 10 August 2021).

The datasets used and/or analyzed during the current study are available from the corresponding author on reasonable request. 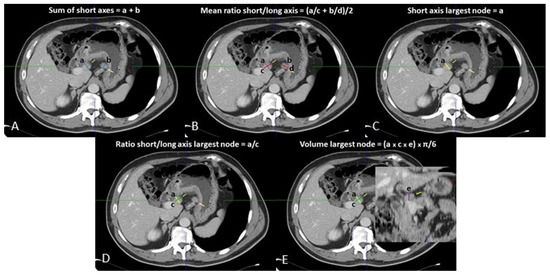 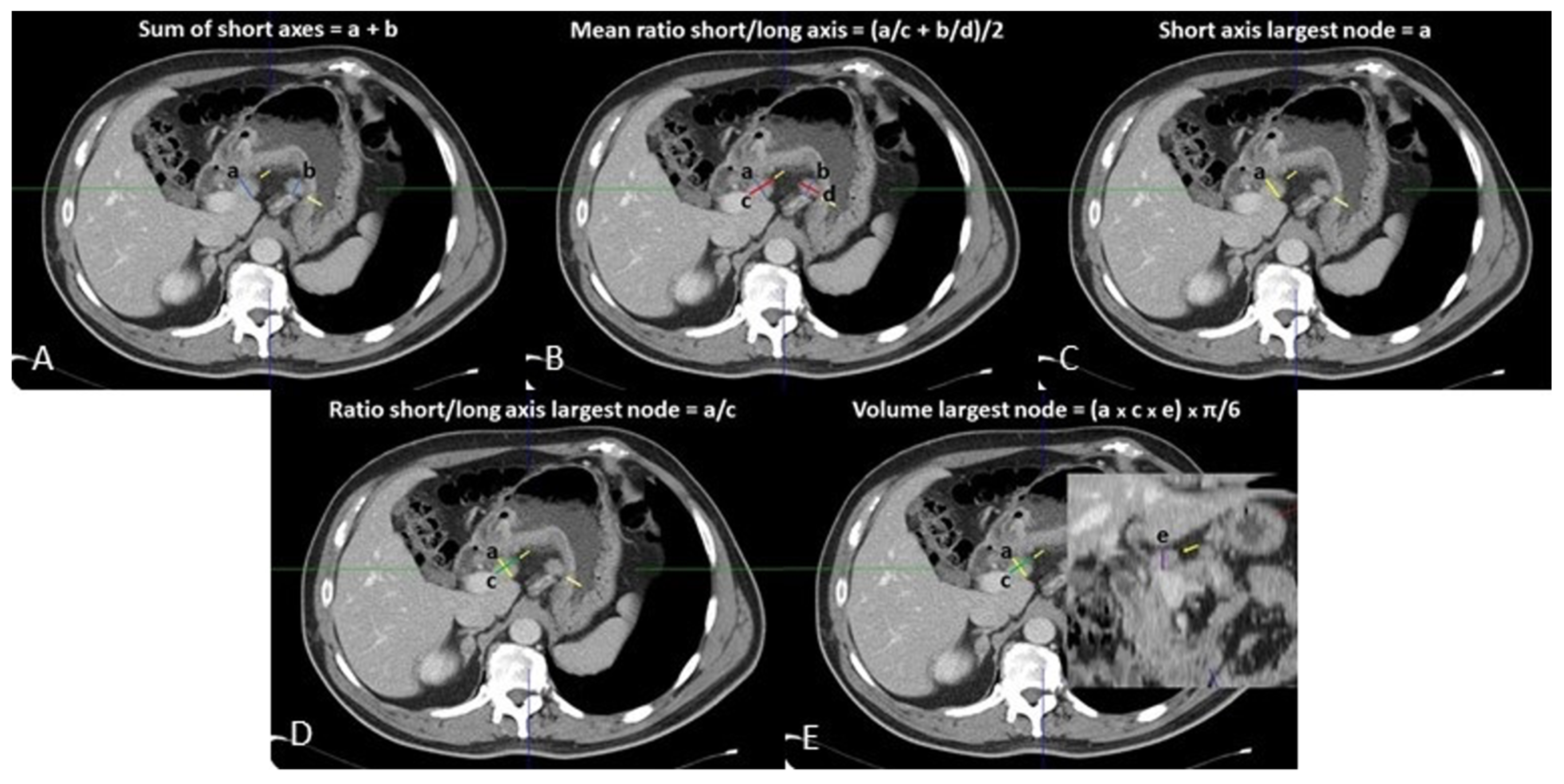 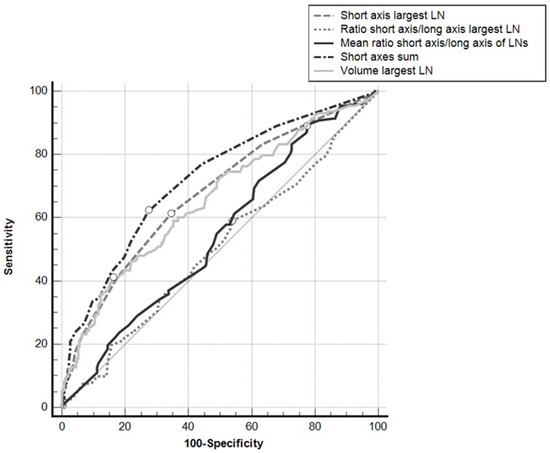 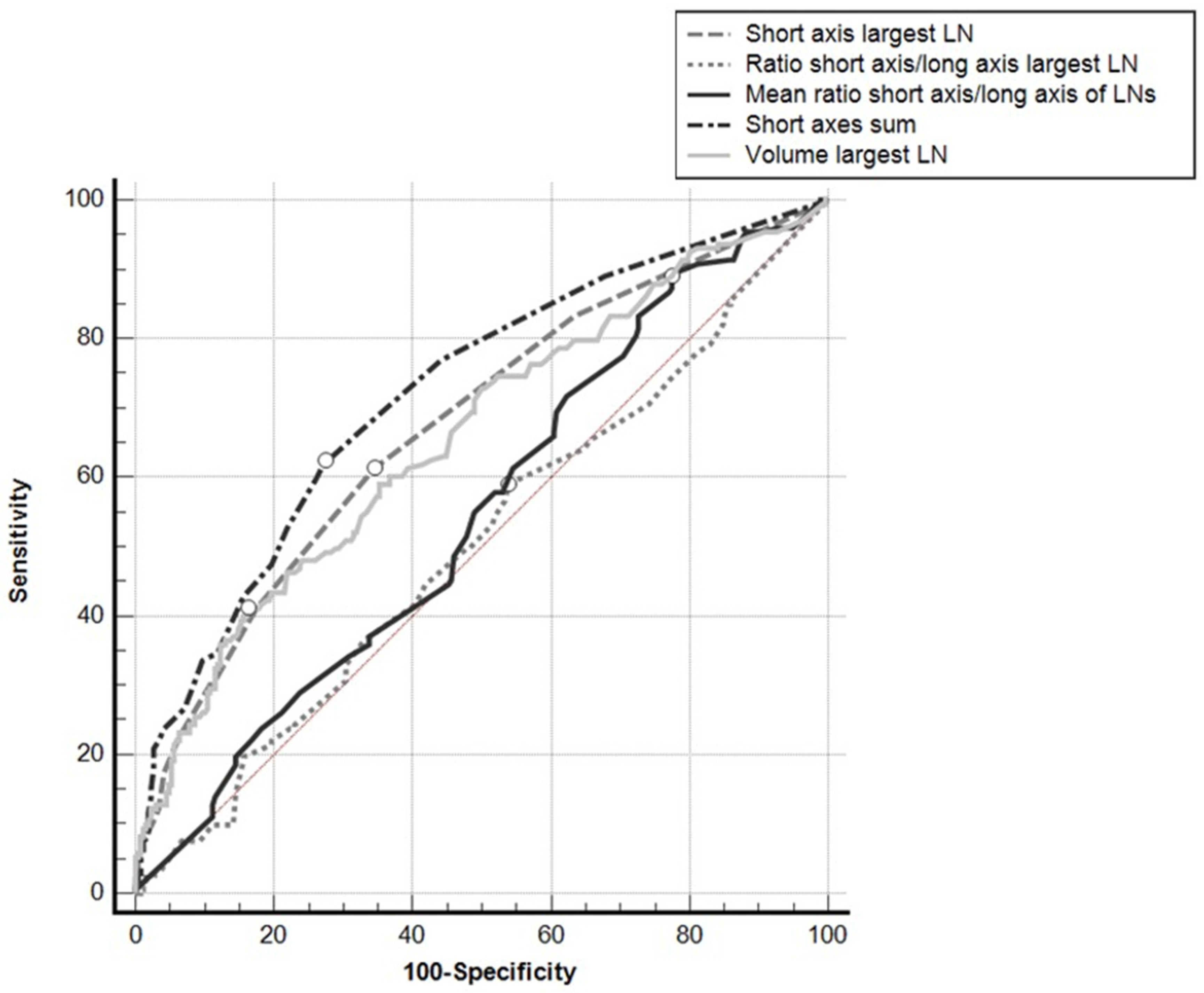 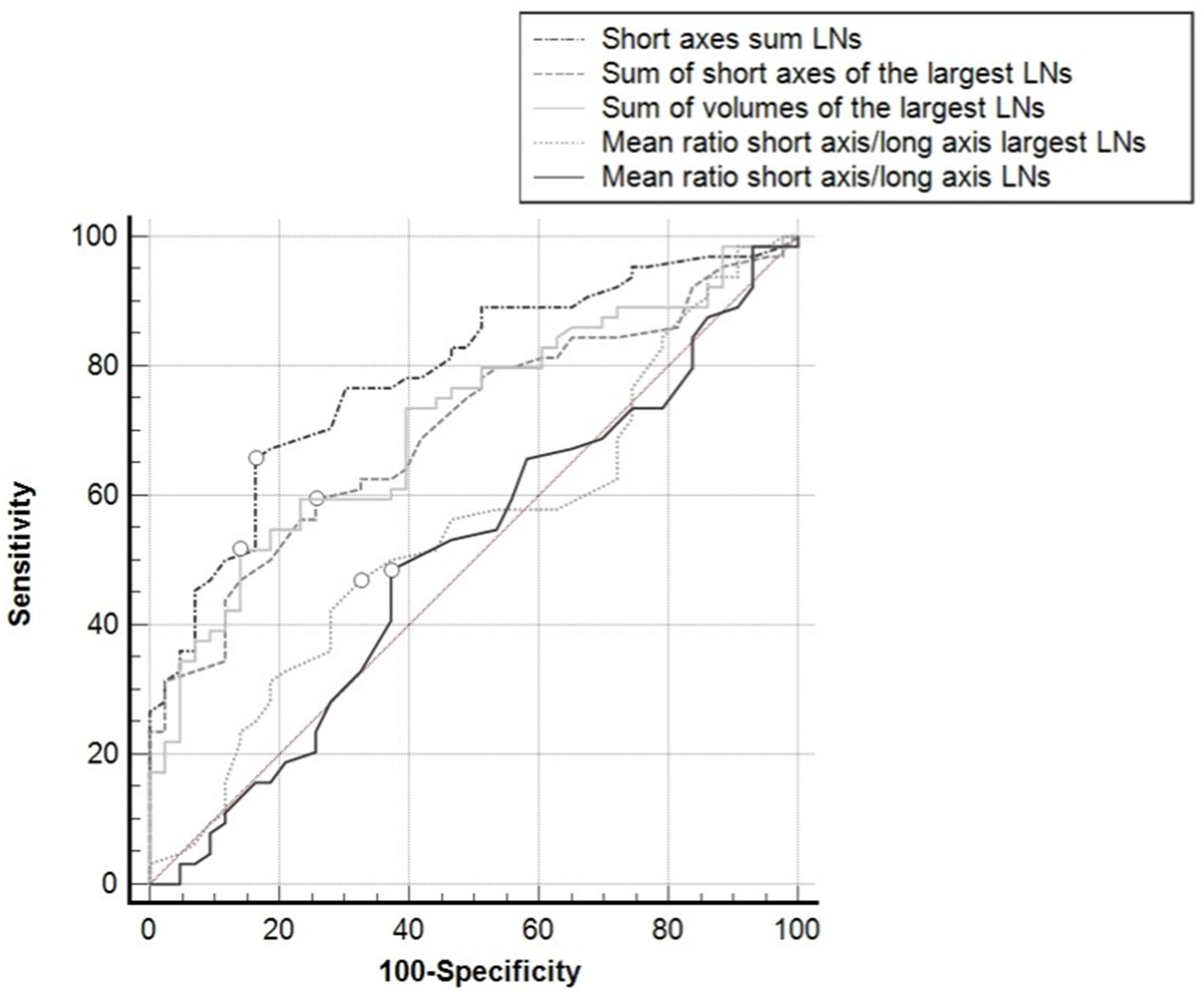