Sarcoidosis is a multisystem disease usually affecting the chest, hilar lymph nodes, and lungs, but can potentially involve any organ; therefore, its clinical presentation may vary. Hepatobiliary involvement is rare, and typically asymptomatic; however, it can lead to cirrhosis, and may require liver transplantation. In this report, we present a rare case of a patient affected by sarcoidosis with hepatobiliary involvement. He presented to our hospital complaining of dyspnea triggered by moderate efforts and oppressive thoracic discomfort. Chest X-ray showed multiple bilateral nodular opacities and enlargement of both hilar regions, confirmed by a subsequent total-body computed tomography scan and positron emission tomography, which also revealed cardiac, splenic, and hepatic involvement. Liver function was studied via gadolinium ethoxybenzyl diethylenetriamine pentaacetic acid (Gd-EOB-DTPA)-enhanced magnetic resonance imaging, and magnetic resonance cholangiopancreatography (MRCP) was also performed. The diagnosis of sarcoidosis was finally achieved via liver biopsy, revealing non-necrotizing granulomas in the periportal space. The patient was treated with prednisone per os, with regression of all lesions at all levels. Although other cases of biliary sarcoidosis have been described, this report provides a complete image set of Gd-EOB-DTPA-enhanced magnetic resonance and MRCP images that is lacking in the English literature, and which may be useful for diagnosis.
Keywords: sarcoidosis; biliary tract; cholangiopancreatography; magnetic resonance; multidetector computed tomography; positron emission tomography; liver diseases sarcoidosis; biliary tract; cholangiopancreatography; magnetic resonance; multidetector computed tomography; positron emission tomography; liver diseases

Sarcoidosis is a multisystem inflammatory disease that generally affects patients aged 40–55 years, without significant gender differences, and with a variable incidence rate based on the country and ethnic group [1]. A recent study from the Mayo Clinic, examining a cohort composed mainly of white people, estimated an incidence rate of 11 per 100,000 people/year [2]. Another study from the United States reported an incidence rate of 8.1 per 100,000 people/year in Caucasians, 17.8 in African Americans, 4.3 in Hispanics, and 3.2 in Asians [3]. In European countries, an incidence of 11.5 per 100,000 people/year has been reported in Sweden [4], and of 4.9 per 100,000 in France [5]. A Korean study reported increase over time in both the sarcoidosis incidence rate and the age of diagnosis—presumably linked to population aging [6].
There is a lack of consensus on the etiology of sarcoidosis, and various associations between occupational or environmental exposures and genetic factors have been described. Sarcoidosis is histologically characterized by non-caseating granulomas made up of epithelioid and multinucleated giant cells [7,8,9].
In more than 90% of patients, sarcoidosis affects the lungs and lymph nodes; however, this multisystem disease can affect virtually any organ [10,11,12].
Due to its multisystem diffusion and wide range of clinical presentations, the diagnosis of sarcoidosis is challenging, and is often delayed. In everyday practice, the presumptive diagnosis is reached by correlating clinical and radiological findings, and is then confirmed by histological evidence of non-necrotic granulomas. Computed tomography (CT), 18F-fluorodeoxyglucose positron emission tomography (18F-FDG-PET), and magnetic resonance imaging (MRI) can be used to identify sarcoidosis in various organs, although a gold standard has not been established [13].
Hepatic involvement in sarcoidosis is reported to range from 50% to 80% of cases with systemic disease [14,15].
Nevertheless, in symptomatic patients, the clinical presentation may vary: fatigue is commonly reported [16]; abdominal pain is complained of in 15% [17] of cases, and fever in 3–28% [18]. Jaundice and pruritus are noted in less than 5% [19] of cases, and are usually related to intra- or extrahepatic biliary involvement [17]. Upon radiological examination, enlargement of the liver and spleen can be found in half of patients—especially in the presence of portal hypertension. The latter is reported to cause esophageal varices in up to 78% of cases, rather than severe liver dysfunction, which is an unusual complication. Diffuse hepatic involvement can lead to cirrhosis in a small—but not negligible—percentage of cases (up to 8% of cases). A specific diagnostic laboratory assay for the diagnosis of hepatobiliary involvement in sarcoidosis is lacking, but an elevation of liver enzymes (especially of alkaline phosphatase (ALP) from 5–10 times the upper limit of normal) can be noted, even if its degree does not correlate with the severity of liver replacement by sarcoidosis [16].
Unfortunately, up to 80% of patients affected by liver sarcoidosis are asymptomatic [19]. Therefore, due to the lack of specific laboratory tests, the use of a unique non-invasive imaging modality—such as MRI—to assess the hepatobiliary involvement in sarcoidosis would be extremely useful to prevent the final step of liver dysfunction. To the best of our knowledge, in the scientific literature, there is a lack of reported cases presenting a complete set of MRI images, which could guide the radiologist to a confident diagnosis of hepatobiliary sarcoidosis, even in asymptomatic patients with negative liver laboratory tests.
The present study describes a case of hepatic sarcoidosis involving the biliary tract investigated via CT, magnetic resonance cholangiopancreatography (MRCP), and functional MRCP performed after infusion of gadolinium ethoxybenzyl diethylenetriamine pentaacetic acid (Gd-EOB-DTPA).

A 53-year-old Caucasian male was admitted to our hospital on 24 April 2020, reporting a 2-month history of dyspnea triggered by moderate efforts (on aerosol therapy with no benefit) that had become associated, over the previous few days, with oppressive and persistent thoracic discomfort, both of which were exacerbated by exertion. The patient, with I-class obesity (BMI = 32), suffered from gastroesophageal reflux disease and hypertension (on medication). The electrocardiogram (ECG) showed first-degree atrioventricular (AV) block, and echocardiography demonstrated mild parietal hypertrophy compatible with the known cardiovascular anamnesis. Chest radiography showed multiple bilateral, ill-defined nodular opacities in the upper lung fields, and slight enlargement of both hilar regions. Nasopharyngeal swab excluded 2019 novel coronavirus (SARS-CoV-2) infection. A chest CT scan was performed, demonstrating peribronchovascular nodules arranged in clusters (Figure 1 and Figure 2). In the lower slices of the acquired field of view, multiple widespread hypodense nodules in the whole liver and spleen (both megalic) were identified, ranging from 1–2 mm to 2 cm (Figure 3). Therefore, the exam was extended to a total-body CT scan, which confirmed the findings mentioned above, and revealed lymphadenopathy in the chest and slightly enlarged lymph nodes in the celiac, paraaortic, and iliac stations.
The differential diagnosis included tuberculosis, sarcoidosis, and lymphoma. The QuantiFERON-TB test was negative, excluding the hypothesis of tuberculosis in a patient with no history or signs of this disease. Laboratory tests demonstrated elevated levels of angiotensin-converting enzyme (135 U/L, with normal values of 13–64 U/L) and neuron-specific enolase (16.6 µg/L, with normal values < 12.5 µg/L), whereas alpha-fetoprotein (AFP), carcinoembryonic antigen (CEA), carbohydrate antigen (CA19-9), and viral hepatitis serology were negative, as well as the complete blood count. Furthermore, an elevation of ALP level was detected (240 U/L, normal values of 30–120 U/L), supporting the hypothesis of biliary involvement due to the lesions demonstrated by CT. Subsequently, the patient underwent 18F-FDG-PET/CT, which showed increased 18F-FDG uptake in all of the parenchymal lesions and lymph nodes revealed by CT, including the diffuse hepatobiliary lesions. Focal uptakes were also detected in districts where the CT scan did not reveal evident lesions, such as the laterocervical lymph nodes, heart (subsequently confirmed by cardiac MRI), lumbar spine, left femur bone marrow, and in a subdiaphragmatic area in the liver. Color Doppler sonography and transient elastography (TE, FibroScan ®, Echosens, Paris, France) revealed liver fibrosis and slow portal flow. Hence, the need to confirm the hypothesis of sarcoidosis, excluding with certainty the possibility of lymphoma, coupled with the need to confirm the nature of hepatobiliary lesions and possible indirect signs of portal hypertension required to ascertain the hepatic venous pressure gradient and perform transjugular liver biopsy. The first examination excluded portal hypertension, and the histological evaluation confirmed the hepatobiliary sarcoid involvement by demonstrating non-necrotizing granulomas. Therefore, all of the lesions highlighted by imaging were attributed to the final diagnosis of sarcoidosis. The patient was then treated with prednisone, with significant improvement in pulmonary symptoms and normalization of ALP level. Since this normalization does not necessarily correlate with regression of hepatobiliary sarcoidosis, MRI was chosen as the follow-up imaging modality of the hepatobiliary lesions. MRI, MRCP, and functional MRCP after infusion of Gd-EOB-DTPA (Primovist®, Bayer HealthCare Pharmaceuticals, Berlin, Germany) confirmed innumerable lesions in the spleen and the liver, but dimensionally and numerically reduced if compared to the previous CT scan. This feature ensured that the decrease in ALP levels was linked to the reduction in sarcoidotic hepatobiliary involvement. Sarcoidotic granulomas, widespread in the liver, showed a low signal on T1-weighted and T2-weighted images, no restriction on diffusion-weighted images (DWIs), and appeared hypointense before and after infusion of contrast medium (Figure 4A–H).
Furthermore, the course of few intrahepatic bile ducts appeared focally restricted, without upstream dilation (Figure 5A). The functional MRCP demonstrated that the excretion of the contrast medium in the biliary tracts was maintained in the physiological time (Figure 5B,C).
At the time of writing, treatment with immunotherapy is ongoing (Figure 6).

In conclusion, imaging plays a crucial role in evaluating the liver parenchyma and biliary tree in patients affected by sarcoidosis, allowing for early assessment of hepatobiliary involvement that might significantly change patient outcomes. This study provides a complete set of MRI, MRCP, and functional-MRCP images after infusion of Gb-EOB-DTPA, representing a valuable guide for radiologists to reach a confident diagnosis of hepatobiliary involvement in sarcoidosis. 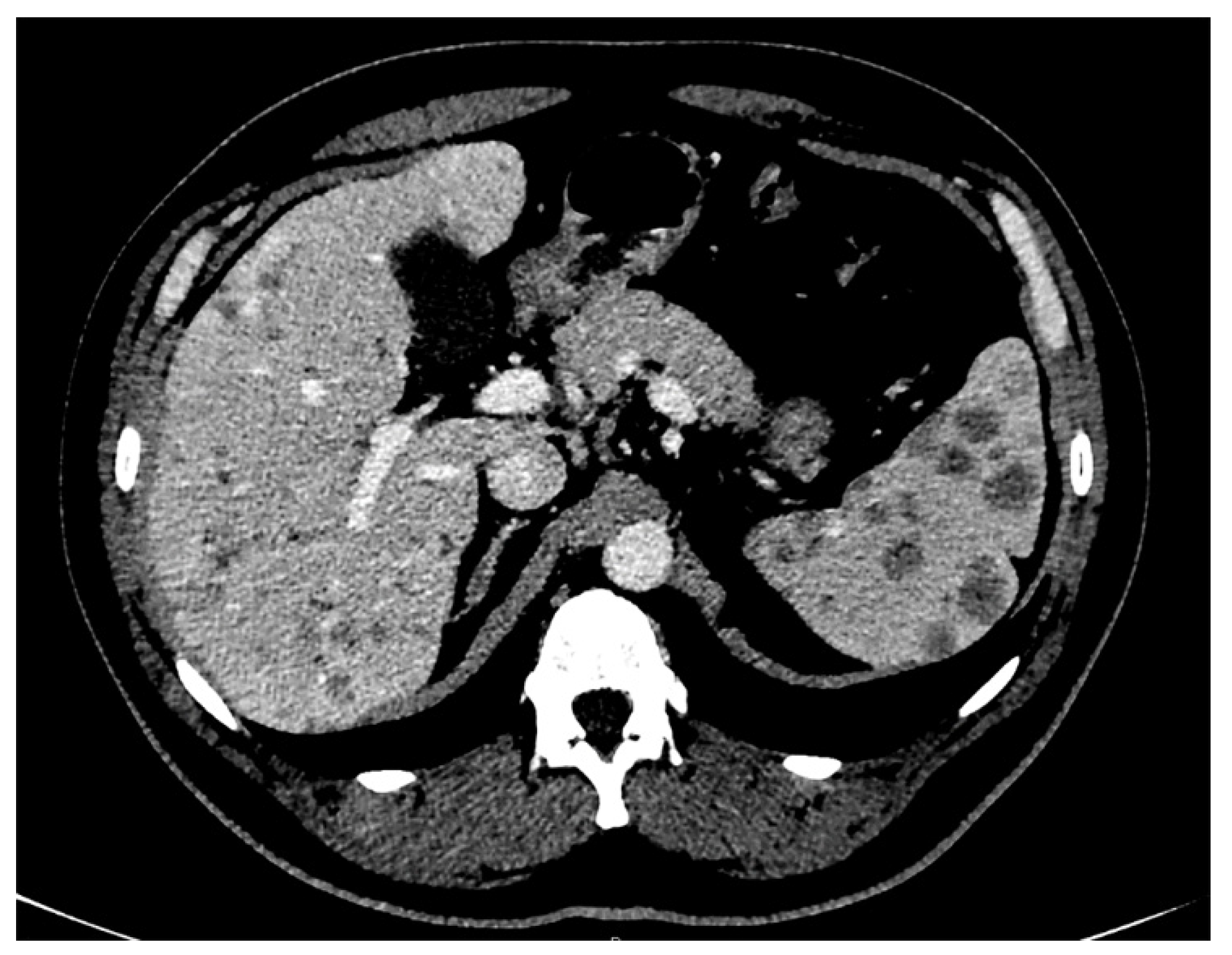 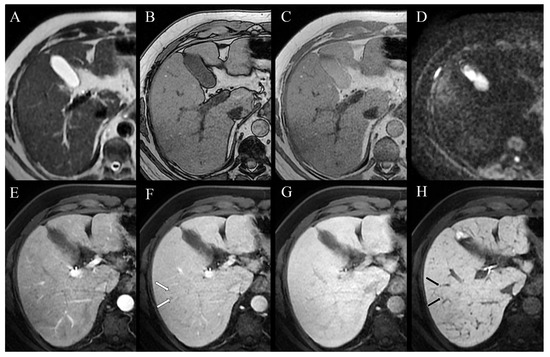 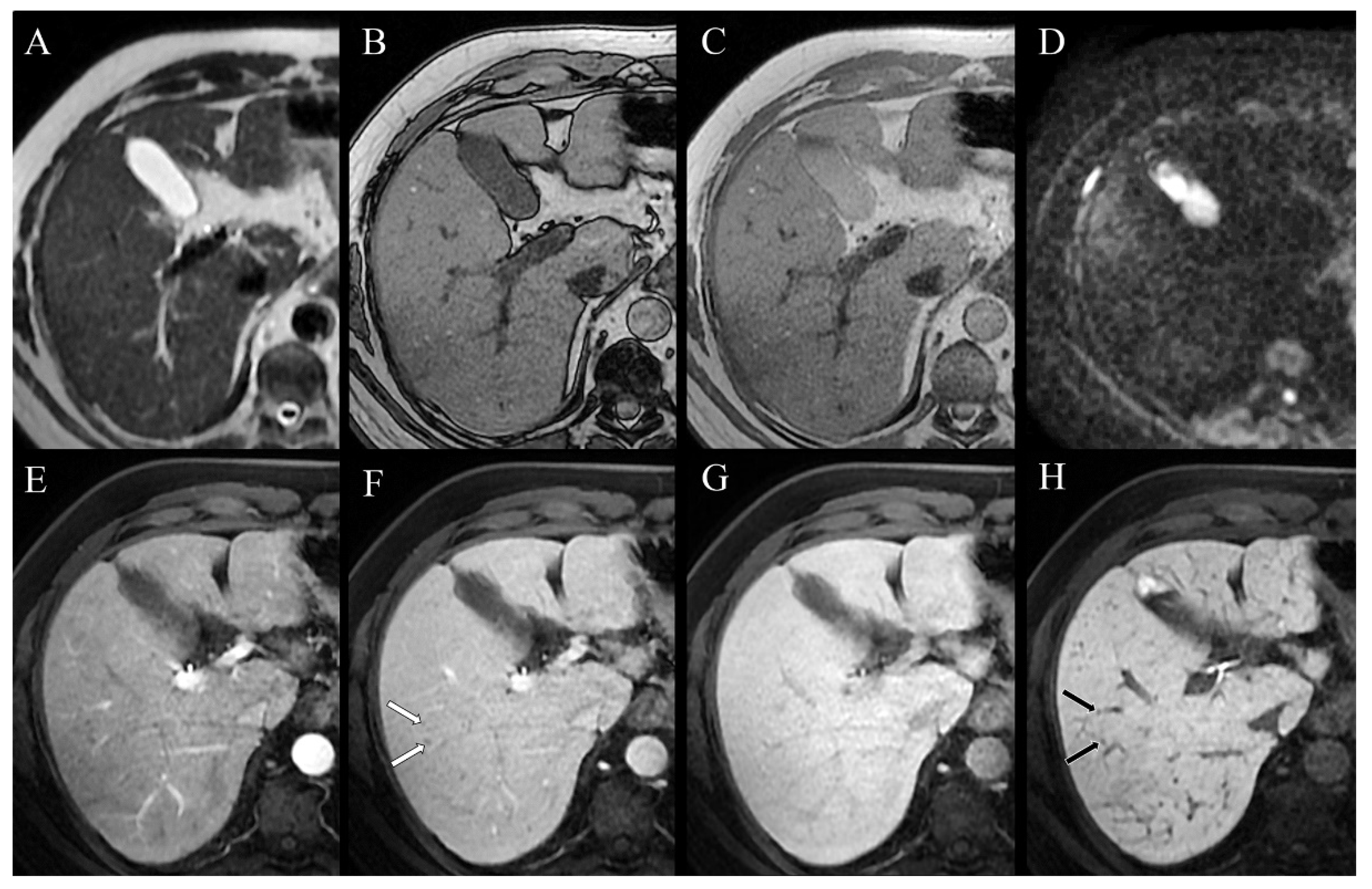