The Significance of Echo Time in fMRI BOLD Contrast: A Clinical Study during Motor and Visual Activation Tasks at 1.5 T

Objectives: To explore the potential of Radiomics alone and in combination with a diffusion-weighted derived quantitative parameter, namely the apparent diffusion co-efficient (ADC), using supervised classification algorithms in the prediction of outcomes and prognosis. Materials and Methods: Retrospective evaluation of the imaging was conducted for a study cohort of uterine cervical cancer, candidates for radical treatment with chemo radiation. ADC values were calculated from the darkest part of the tumor, both before (labeled preADC) and post treatment (labeled postADC) with chemo radiation. Post extraction of 851 Radiomics features and feature selection analysis—by taking the union of the features that had Pearson correlation >0.35 for recurrence, >0.49 for lymph node and >0.40 for metastasis—was performed to predict clinical outcomes. Results: The study enrolled 52 patients who presented with variable FIGO stages in the age range of 28–79 (Median = 53 years) with a median follow-up of 26.5 months (range: 7–76 months). Disease recurrence occurred in 12 patients (23%). Metastasis occurred in 15 patients (28%). A model generated with 24 radiomics features and preADC using a monotone multi-layer perceptron neural network to predict the recurrence yields an AUC of 0.80 and a Kappa value of 0.55 and shows that the addition of radiomics features to ADC values improves the statistical metrics by approximately 40% for AUC and approximately 223% for Kappa. Similarly, the neural network model for prediction of metastasis returns an AUC value of 0.84 and a Kappa value of 0.65, thus exceeding performance expectations by approximately 25% for AUC and approximately 140% for Kappa. There was a significant input of GLSZM features (SALGLE and LGLZE) and GLDM features (SDLGLE and DE) in correlation with clinical outcomes of recurrence and metastasis. Conclusions: The study is an effort to bridge the unmet need of translational predictive biomarkers in the stratification of uterine cervical cancer patients based on prognosis.
Keywords: radiomics; diffusion-weighted; MRI; cervical cancer radiomics; diffusion-weighted; MRI; cervical cancer

Uterine cervical cancer incidence ranks seventh of all cancers [1] and represents a significant burden in low and middle-income nations [2], while in developing nations, it accounts for leading mortality in women [3]. Radiation with concurrent chemotherapy forms the cornerstone of the management of stage IB2 to IVA uterine cervical cancer disease for the International Federation of Gynecology and Obstetrics (FIGO) [4]. This treatment strategy, used in neoadjuvant settings, has gained popularity because of excellent responses leading to the debulking of these tumors, and further, leading to shrinkage and possible resection [5,6,7]. Tumor size, histology, lymph node involvement, the infiltration of neighboring structures and the presence of distant metastases are steering the prognostication in cervical cancer [8], with a notable discrepancy in the prognosis among patients belonging to the same stage, which could not be attributed to the constellation of clinico-pathological features [9]. The determination of a few of these factors requires representative tumor tissue, which warrants invasive procedures that add to the risk and burden of existing disease.
Magnetic resonance imaging (MRI) and 18F–fluorodeoxyglucose (FDG) positron emission tomography/computed tomography (PET/CT) are vital for the initial staging, therapeutic approach [10], and response assessment to treatment [11]. Studies in the past have explored the advanced functional imaging parameters obtained during MRI, namely, diffusion-weighted images (DWI) to identify tumors and further use the apparent diffusion coefficient (ADC) quantitative parameter from these DW images to assess response [12,13,14,15,16]. There is still a broad disparity regarding the selection of regions to measure ADC, as it argued that the selected part might not be representative of tumors exhibiting heterogeneity.
Radiomics is a growing arena of scientific research that uses imaging sets of high dimensional features, extracted from the normal acquired cross-sectional images and yields information that semantic analysis otherwise fails to acquire. The cystic and necrotic areas within the volume of the tumor that are representative of tumoral heterogeneity, and behavior that marks aggressiveness and hence outcome, are captured by radiomics [17,18]. This branch of science exploits mathematical modeling to dig quantitative features from medical images in order to gain predictive models that provide insight into treatment prognosis and survival [19,20,21], with preliminary studies [22,23,24,25,26,27,28] expressing a multitude of clinical outcomes by exploring radiomics. The present study endeavored to increase our existing knowledge regarding the role of functional imaging using diffusion-weighted derived quantitative parameters, namely the apparent diffusion coefficient (ADC) and the augmented role of radiomics using supervised classification algorithms by machine learning in the prediction of clinical outcomes, namely the FIGO stage, lymph node status, metastasis, and development of recurrence in uterine cervical cancer patients.

After obtaining approval from the institutional review board, this retrospective study was carried out between January 2016 and January 2017, in our institute, on patients who were referred to our hospital for a pelvic MR examination for the evaluation of histopathologically diagnosed uterine cervical cancer, fulfilled criteria for upfront treatment with chemoradiation, and were not surgical candidates. Eighty-three patients with cervical cancer of variable stage (FIGO IB2-IVA) were enrolled, details of which are outlined in the Supplementary File. The CPRS (Computerized patient record system—hospital information system) was reviewed to evaluate the patient’s age, presence of para-aortic lymph nodes, development of distant metastasis and recurrence. Nodal recurrences were documented as pelvic or para-aortic. Metastasis was similarly recorded as to lung or other sites. The administration of radiotherapy may be delivered as external pelvic beam RT (EBRT), followed by brachytherapy or interstitial needle devices. The study cohort included patients who were given upfront EBRT in a total dose of 45 Grays in 25 fractions. An MR examination after the conventional EBRT was conducted to ascertain the status of any residual disease and facilitate the further decision for brachytherapy. As per the institutional protocol, CT-based image-guided brachytherapy was performed. The ICRT dose was 7.5 Grays in 3–5 fractions, and the MUPIT dose was 20–25 Grays in 4–5 fractions.

The standard non-contrast MRI of the pelvis was performed using the Siemens Avanto Magnetom 1.5 T MR Scanner. All patients were imaged in supine position using a pelvic body coil. Conventional and diffusion weighted (DW) MRI studies were conducted before the initiation and post completion of chemoradiation treatment. All of the patients underwent DWIs by using a multisection spin echo single shot echo planar imaging (EPI) sequence with b values of 0, 400, and 800 s/mm2. An average of 15 sections was obtained in the axial plane covering the area of interest. Imaging parameters were: TR/TE of 10,000/108 ms, FOV of 40 × 40 cm, and acquisition matrix of 256 × 256 and section thickness of 5 mm with an intersection gap of 1–2 mm.

A radiologist (XX), with more than six years of training in pelvic MR imaging, autonomously evaluated the Diffusion images and corresponding ADC maps, with an awareness of the fact that patients had cervical carcinoma but blinded to the final clinical outcome. Under the supervision of a board-certified radiologist with 25 years of experience in treating genitourinary cancers, quantitative DWI analysis of the tumor was performed, based on a freehand-drawn region of interest (ROI) on the ADC map [29] that showed restricted diffusion (i.e., high signal on b800 DWI and low signal on the ADC map); mean ADCs were recorded. The labeling of ROI was independently checked by a senior radiation oncologist (XX) with more than 25 years of experience in treating genitourinary cancers. If any, the disagreement was resolved by two senior radiologists (XX) with more than 40 years of experience. The ADC measured in initial baseline imaging was coded as ADCpre, and follow-up imaging post-treatment completion was coded as ADCpost, with a separate calculation for change referred to as ADCchange. Regarding lymph nodes, a positive node was defined by a short-axis diameter > 8 mm [30]. When in doubt, positive cytology was considered as the gold standard for the diagnosis of malignancy, both for pelvic and distal recurrence and distant metastasis.

All segmentations of the tumor were performed by a radiologist (XX) using the 3D Slicer software produced by Slicer [31] (http://www.slicer.org/, accessed on 12 December 2019). To minimize the errors involved in cropping from intra-operator and inter-operator variability, arising as a result of manual segmentation, a semi-automatic segmentation process was adopted [32]. This was further encouraged by the use of the Grow cut algorithm [33]. The task of 3D segmentation was aimed at culminating a volume of interest (VOI). The VOI consisted of regions of interest (ROIs) that were manually segmented along the tumor contour on each transverse section concerning T2 weighted images in the transverse axial planes. To remove any potential bias, the same radiologist re-segmented the VOIs, blinded to the previous task of segmentation, approximately two months after the first segmentation process. Finally, all segmentations were validated by a senior radiologist (XXX) who has 40 years of experience. A representative ROI and VOI definition are shown in the Supplementary File. Post-segmentation of images, using a semi-automated algorithm, 851 radiomics features were extracted using PyRadiomics [34], an open-source software package. The details of radiomic features in concordance with previous literature [35,36,37] are provided in the Supplementary File as text.

Cohen’s Kappa and area under the curve (AUC) were used as the statistical parameters to establish the model efficiency, which was calculated using the pROC v1.16.2 and caret packages available in R (details in Supplementary File).

Devising a robust and noninvasive strategy to assess tumor heterogeneity, prior to treatment, might have an insightful impact on the management of individual cancer patients through the early prediction of treatment outcomes with the prospect of modifying therapy as part of the precision medicine exemplar. We tried to devise a machine learning prediction method for clinical outcomes by exploiting the multi classifier system. We further aim to validate our findings in larger cohorts, both within our centre and in multi-institutional centers. Our results revealed an incremental role of radiomics in functional MR imaging that deploys ADC values for the prediction of recurrence and distant metastasis. The model will be particularly helpful for low to middle income nations that have an increasing incidence of cervical cancer as our study does not incorporate the use of FDG, PET, CT and Contrast MR imaging, the availability and interpretation of which are limited in resource-constrained low resource nations.

Patient consent was waived off with receipt of IRB approval.

All data generated and analyzed during this study are included in this published article (and its Supplementary Information Files). 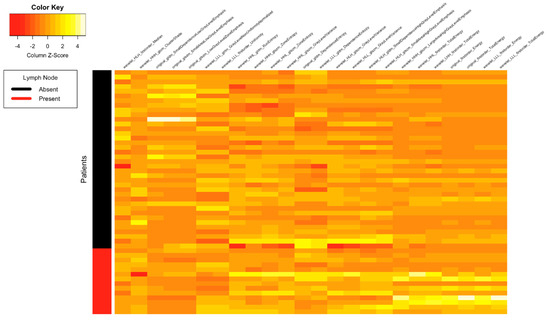 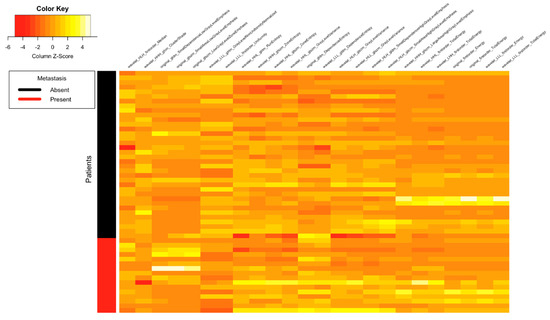 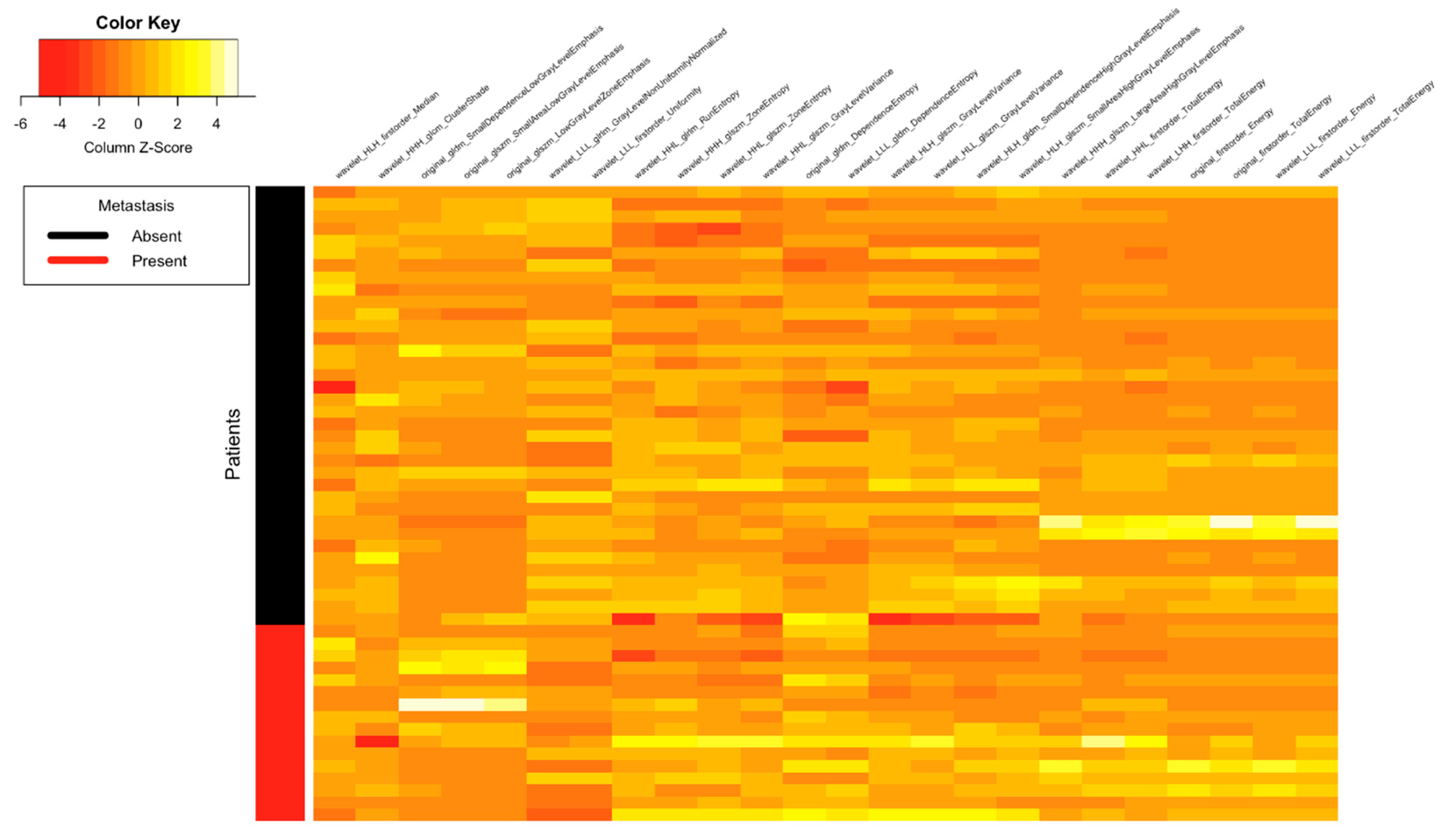 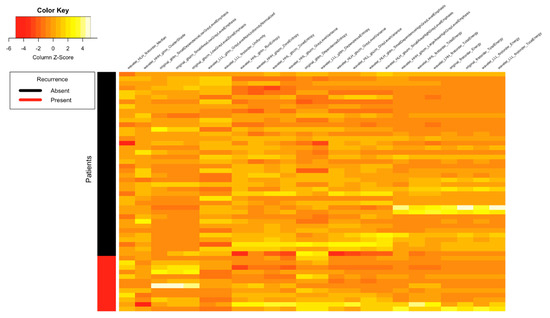 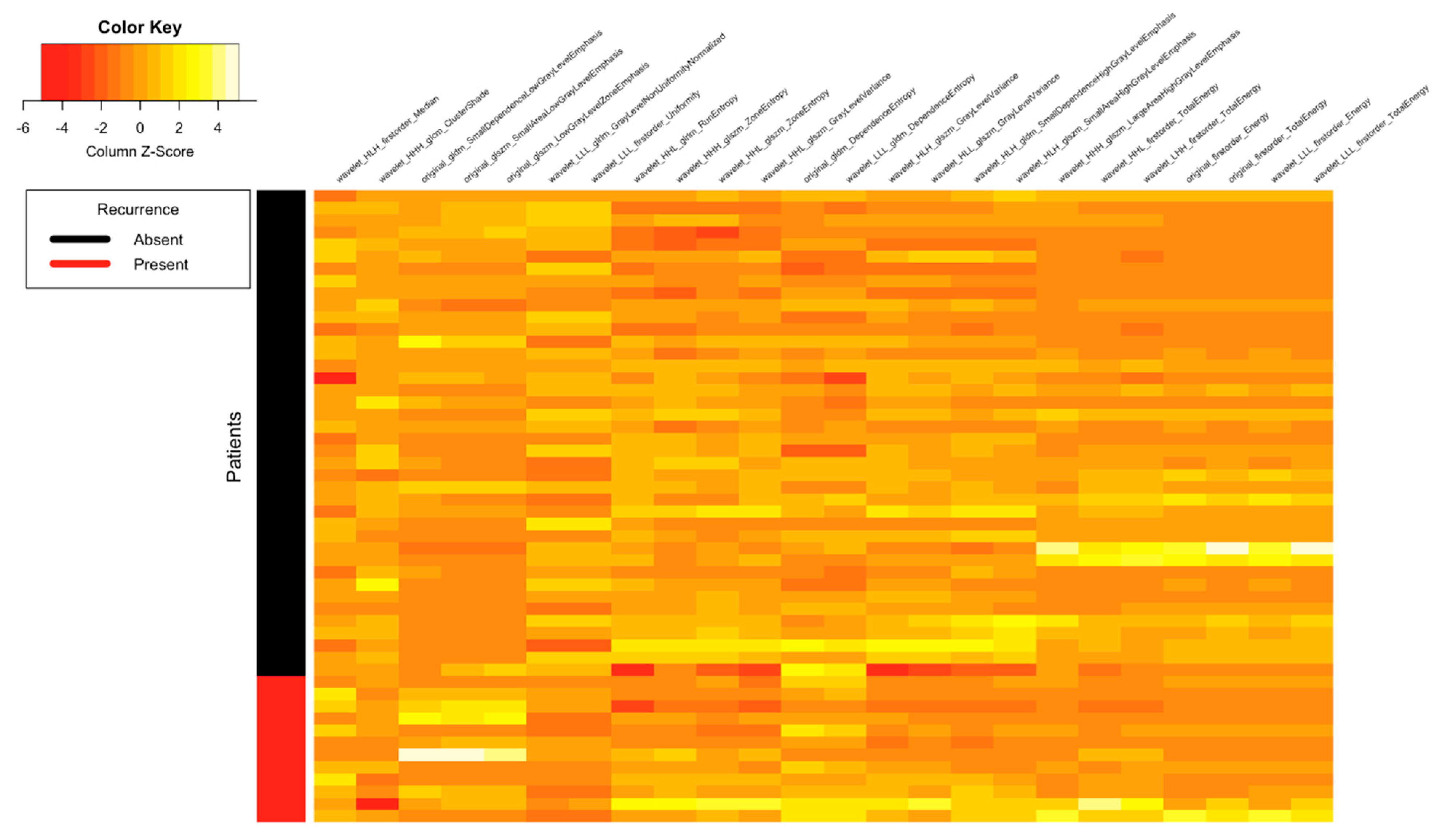 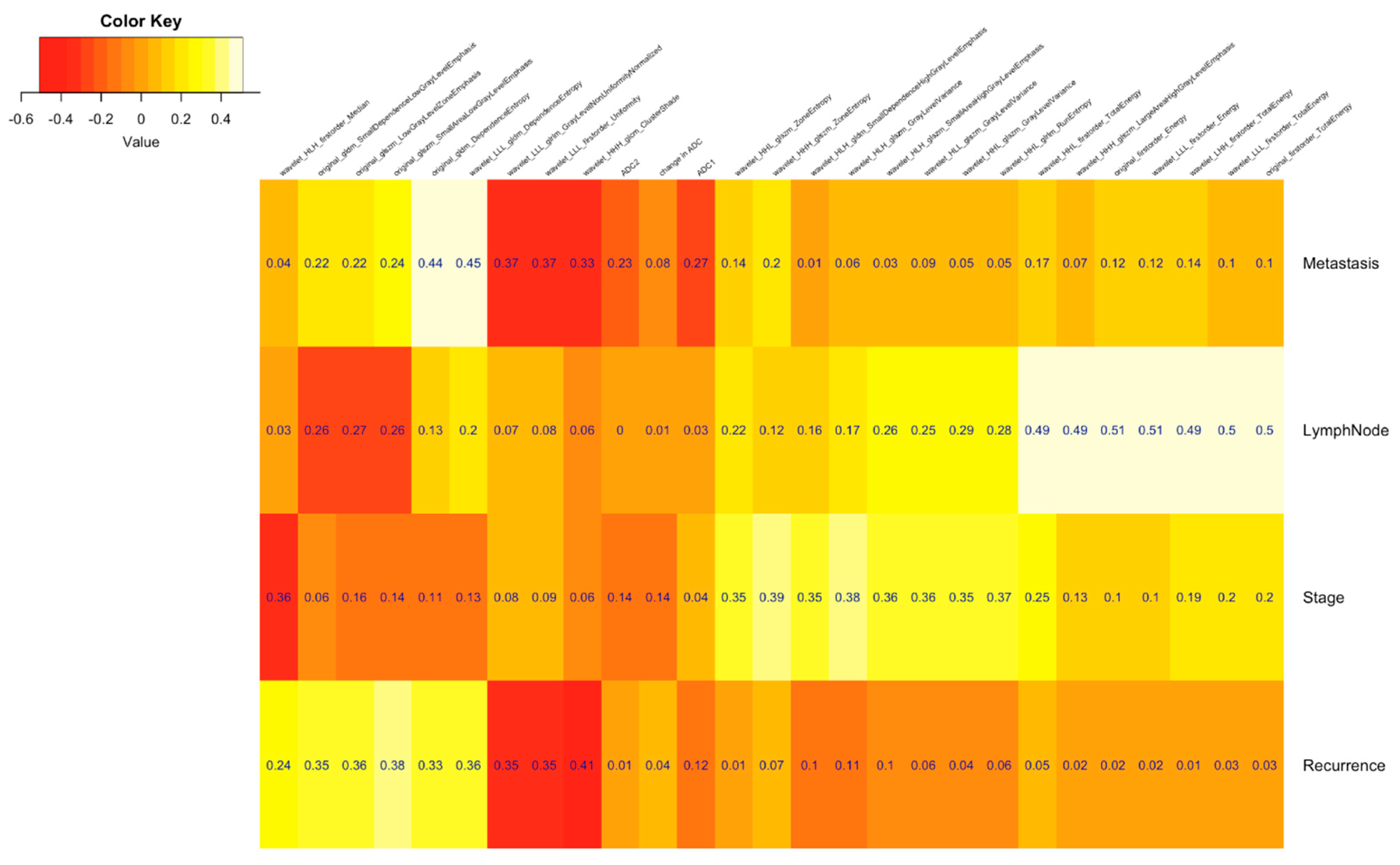