Parkinson disease (PD) is a progressive disorder of the nervous system, resulting in the loss of dopaminergic neurons. PD patients require long-term treatment and frequent adjustments of symptomatic therapy as the disease progresses [1,2]. Dopamine transporter imaging with [123I]FP-CIT (N-(3-Fluoropropyl)-2β-carbomethoxy-3β-(4-[123I]iodophenyl) nortropane) single photon emission computed tomography (SPECT) and [18F]FP-CIT(N-(3-[18F]fluoropropyl)-2β-carboxymethoxy-3β-(4-iodophenyl)nortropane) positron emission tomography (PET) are in vivo molecular imaging techniques used to investigate loss of dopaminergic neurons in the striatum in patients suspected of having PD. Early diagnosis can improve the assessment of patient prognosis, as more than half of nigrostriatal dopaminergic neurons are lost before the appearance of typical motor manifestations [3]. [123I]FP-CIT SPECT is indicated in cases when the etiology of tremor and motor dysfunction is difficult to establish clinically [4]. Although this method can distinguish essential tremor from PD, a strong and consistent correlation between [123I]FP-CIT uptake in the striatum and disease severity, as assessed for example with the Movement Disorder Society-Sponsored Revision of the Unified Parkinson’s Disease Rating Scale (MDS-UPDRS) Part III (motor component), has not been established [5]. In a study by Beanamer et al., for example, the [123I]FP-CIT striatum to background activity ratios correlated with the bradykinesia subscores but not with rigidity or tremor subscores, suggesting that other factors, in addition to nigrostriatal degeneration, may contribute to motor dysfunction severity [6]. Simuni et al., reported a weak correlation between MDS-UPDRS-III and dopamine transporter binding in Parkinson’s Progression Markers Initiative (PPMI) cohort at the baseline with a Spearman correlation coefficient of −0.2119 for the contralateral putamen specific binding ratio [7]. Furthermore, [18F]FP-CIT PET demonstrated only modest correlations between radiotracer striatal uptake and UPDRS-III motor scores in 542 patients, with Pearson’s r of −0.128 and −0.155 for right and left posterior putamina, respectively [8]. Therefore, a novel, quantitative, facile, low-cost test that would complement dopamine transporter imaging and could be administered prior to radiotracer injection may be valuable for the objective assessment of motor dysfunction in early PD.
Virtual reality (VR) is an innovative technology that presents the user with interactive, realistic, computer-generated, and three-dimensional images [9]. VR allows for precise tracking of participant’s extremities and head, which may be helpful for quantitative assessment of movement abnormalities such as bradykinesia and tremor, both cardinal symptoms of PD. Furthermore, VR enables participants to perform tasks in custom, fully interactive environments that closely resemble activities of daily living, which become difficult for patients to perform as PD progresses. There is interest in the medical community to study VR in PD as a potential therapeutic tool. A pilot study demonstrated that movement imitation therapy with VR enhances the effect of motor practice in patients with PD [10]. VR dance exercise has been found to have a positive effect on balance, activities of daily living, and depressive disorder status of PD patients [11]. VR training significantly improved obstacle crossing performance and dynamic balance in participants with PD [12]. Canning et al., discussed the use of VR to study gait and balance through the manipulation of environments for improved understanding of motor-cognitive neural circuitry in PD [13]. According to a literature review by Mirelman et al., VR may be a promising tool for the assessment of gait impairments in PD [14]. Although VR approaches have been studied as a tool for therapy for PD patients, this proposal is, to our knowledge, the first systematic attempt to develop a VR methodology as a tool for quantifying motor dysfunction in patients undergoing dopamine transporter imaging with [123I]FP-CIT SPECT/CT.

In this prospective study, fifty patients presenting for the evaluation of PD versus essential tremor with [123I]FP-CIT SPECT/CT or as part of enrollment in PPMI trial underwent testing with clinical questionnaires and VR between 6 September 2018 and 3 March 2020. Inclusion criteria were: age ≤85, Hoehn and Yahr scale ≤3, ability to provide oral and written informed consent, and ability to undergo VR testing in a seated position. Subjects were excluded if they had a normal brain [123I]FP-CIT SPECT/CT, a history of cerebral infarct, debilitating arthritis, or other orthopedic-relevant problem(s). Six patients were excluded on the basis of normal age-matched z-scores for putamen-to-background ratios on [123I]FP-CIT SPECT/CT, with the final group of patients enrolled in the study consisting of 44 patients. The study was approved by the Institutional Review Board.

Clinical evaluation included the assessment of the motor portion of the MDS Unified Parkinson’s Disease Rating Scale (UPDRS-III) as well as Hoehn and Yahr scale (H&Y) [15,16]. Motor evaluation was carried out with patients taking their usual antiparkinsonian medications for those patients with PD and already being treated. The presence of antiparkinsonian medications was recorded. Furthermore, participants underwent evaluation with Montreal Cognitive Assessment (MoCA) [17].

A room-scale VR environment with Vive (HTC Corporation, New Taipei City, Taiwan) headset and controllers was installed for the development of medical applications. The Vive device uses more than 70 sensors, including gyroscopes, accelerometers, and laser position sensors and can track the user’s head and arm movement with sub-millimeter precision. The Vive headset has the following specifications: resolution of 2160 × 1200 (1200 × 1080 per eye); physical size 19.0 × 12.7 × 8.9 cm, 563 g; sensors that include accelerometer and gyroscope; refresh rate of 90 Hz. The price of a Vive VR set is $400–$800 and includes two controllers, each with 24 sensors, a multi-function trackpad, dual-stage trigger, HD haptic feedback, integrated rechargeable 960 mAh battery, and weighing 1.125 lbs. VR application for quantification of motor dysfunction was developed in Unity software (Unity Technologies, San Francisco, CA, USA) version 2018.2.13f1 with 3D assets created in Autodesk Maya (Autodesk Inc., San Rafael, CA, USA).
The VR test consisted of three modules that were completed in a seated position by the subject: (1) bradykinesia, (2) activities of daily living (ADL), and (3) tremor assessment. For (1), bradykinesia assessment, patients were asked to slice three food items (a loaf of bread, a carrot, and a cucumber) with two attempts for each hand using a 3D knife modeled in VR, as shown in Figure 1. The weight and size of the HTC Vive controller were similar to the weight and size of a typical kitchen knife. The amount of time patients needed to complete the food slicing activity was recorded for each hand (VR Time). For (2), ADL assessment, patients were prompted to pick up and move five mugs modeled in VR from one end of a virtual table to another, as shown in Figure 1. Each mug contained ten cylinders, which represented levels of hot liquid such as tea or coffee. If a particular mug were tilted in the vertical axis beyond a set threshold while being moved by the subject, the virtual liquid spilled out. The number of cylinders left in the mug after the patient placed it down on the table was recorded. The maximum score was 10 for each attempt (VR ADL Score). Five scores per hand were recorded for a total of ten attempts per subject. For (3), tremor assessment, an approach similar to a previously reported method that utilized a smartphone’s accelerometer in suspected PD patients was implemented [18]. First, subjects maintained both upper limbs fully extended in front of them with the palms facing the ground and holding the VR controllers for 10 s (‘Posture’ condition). Next, subjects sat quietly in a chair as relaxed as possible with forearms supported and with hands hanging and holding the VR controllers for 10 s (‘Rest’ condition). Two trials for each hand position were conducted while the 3D angular data from the controllers was recorded with a sampling rate of 90 Hz. Original and resampled data for each patient’s second trial with the left and right hand was used for further analysis with Matlab (MathWorks, Natick, MA, USA). Data acquired in the first 3 s was trimmed to mitigate for initial arm motion artifacts. Power spectral density was calculated by using the Welch periodogram with Matlab to obtain peak power of the controller position (m2/Hz) and dominant tremor frequency (Hz) [18,19].

This study demonstrated that a novel computer-generated VR environment may safely and effectively provide a simple, rapid, quantitative assessment of motor dysfunction in patients being evaluated for the presence of PD and may serve as an adjunct to brain imaging such as [123I]FP-CIT SPECT/CT. Future studies will assess the utility of serial VR testing in a larger number of patients to evaluate motor dysfunction progression in PD and its potential to impact clinical management.

The study was conducted according to the guidelines of the Declaration of Helsinki and the Code of Federal Regulations on the Protection of Human Subjects, and approved by the UNIVERSITY OF CALIFORNIA, SAN DIEGO HUMAN RESEARCH PROTECTIONS PROGRAM (180924, 10/4/2018).

The data presented in this study are available on request from the corresponding author. The data are not publicly available to preserve patient confidentiality. 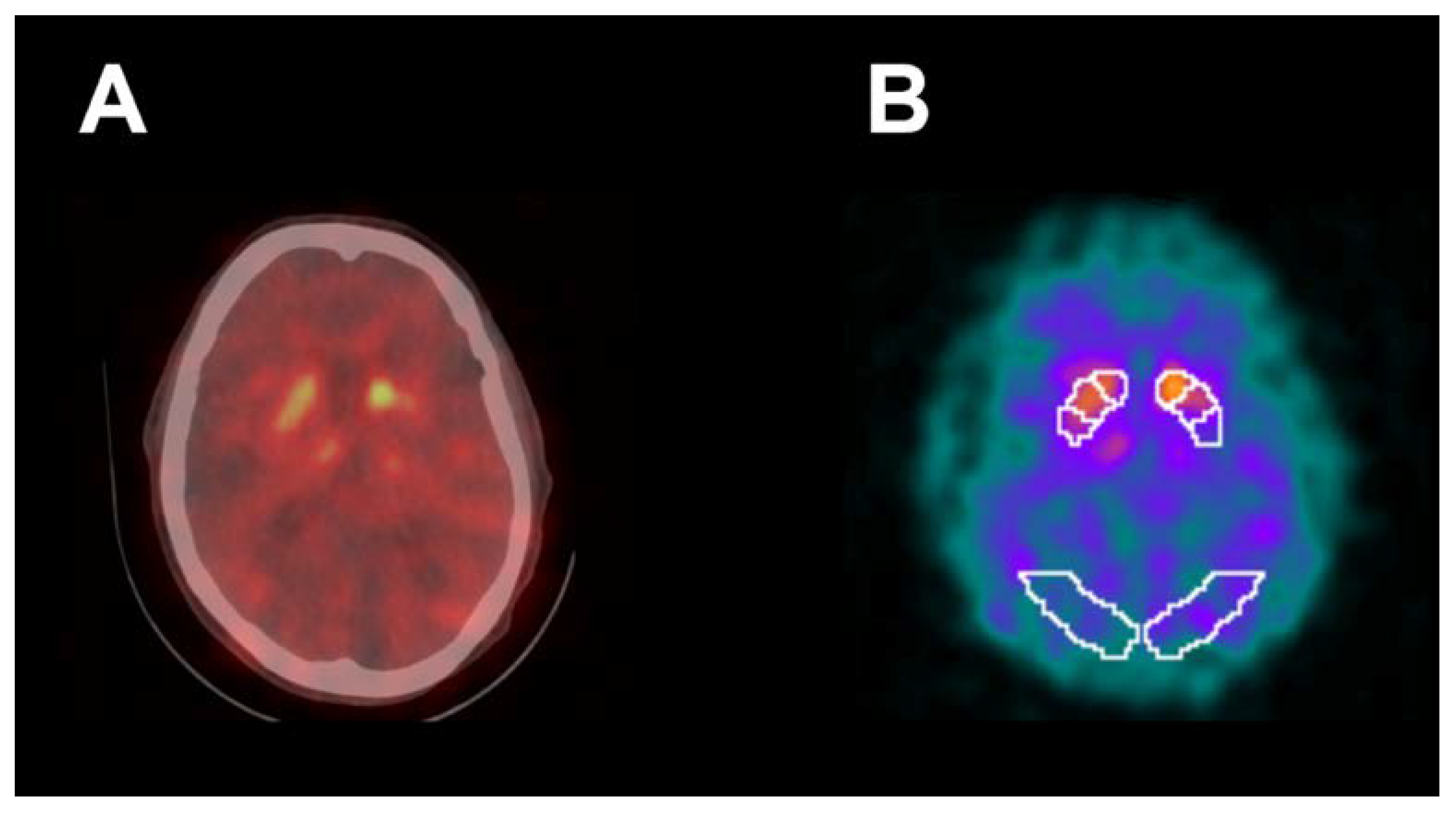