Accurate measurement of object volumes using computed tomography is often important but can be challenging, especially for finely convoluted objects with severe marginal blurring from volume averaging. We aimed to test the accuracy of a simple method for volumetry by constructing, scanning and analyzing a phantom object with these characteristics which consisted of a cluster of small lucite beads embedded in petroleum jelly. Our method involves drawing simple regions of interest containing the entirety of the object and a portion of the surrounding material and using its density, along with the densities of pure lucite and petroleum jelly and the slice thickness to calculate the volume of the object in each slice. Comparison of our results with the object’s true volume showed the technique to be highly accurate, irrespective of slice thickness, image noise, reconstruction planes, spatial resolution and variations in regions of interest. We conclude that the method can be easily used for accurate volumetry in clinical and research scans without the need for specialized volumetry computer programs.
Keywords: CT; volumetry; segmentation; partial-volume averaging CT; volumetry; segmentation; partial-volume averaging

Measuring the volume of a lesion or organ can be very useful for a variety of clinical, pathologic, and physiologic analyses. Since the introduction of computed tomography (CT) in the 1970s, there have been numerous methods proposed to estimate the volume of organs or tissues from CT images. The manual planimetric method of tracing the tissue’s boundary is perhaps the simplest approach but has its weaknesses [1,2,3,4]: it is tedious, prone to inter-user variation, has difficulty in identifying unsharp interfaces and is often inaccurate [5,6,7]. Other, more sophisticated approaches include:
Most computer-based volumetry programs ultimately depend on precise localization of the boundaries between the measured object and surrounding tissue. Threshold density values chosen to represent interfaces may vary [16] and produce differences in boundary location. Convolution of surfaces, especially when the interfaces are intricate on a small scale, produces severe partial volume effects and subsequent unsharp boundaries which cannot be precisely localized. As a result, there are often significant errors encountered with the use of these programs [16,17,18], and as assessed objects become smaller, such that the convoluted surfaces involve large fractions of their images, the problem worsens [18,19].
Other factors exacerbate these inaccuracies. Thick acquired slices produce more partial volume effects at interfaces, and are associated with greater errors [19]. Larger pixels and noise introduced by lower radiation doses produce uncertainty of boundary location, and thus also increase error.
If a structure has a uniform density, however, and is surrounded by a tissue which has a uniform but different density, it is possible to determine accurately the volume of the structure without identifying its surface, no matter how convoluted the interface between the structure and its surrounding tissue may be. The process, which we present in this paper, is relatively rapid and can be performed on any standard workstation without dedicated computer algorithms. Our aim was to test the accuracy of the method; to this end, we created and scanned a phantom with an intricately convoluted surface and compared its calculated volume with an independent volume assessment. We found the method to be highly accurate, even with considerable variations in slice thickness, field of view, radiation dose, region-of-interest (ROI) shapes, reconstruction planes and kernels.

The theory behind this method is based on the fact that the CT number in Hounsfield units (HU) for any region of interest (ROI) is equal to the weighted average of the HUs of the different materials contained in that ROI, which can be written as: where is the average CT number of the ROI; subscripts m1, m2, m3,… refer to the different materials, and f is the fractional contribution of each material to . If more than two materials are involved, it may be impossible to determine the f for every material by only knowing the and the for the different materials; histogram analysis or special software algorithms are required. However, if there are only two materials (or tissues); A and B, and material A is fully contained in (or mixed with) B which has a different HU, it is theoretically possible to determine the fraction of A and hence its volume using the values of both HU and area of an ROI (region of interest), which covers only these two materials. These two values are readily identified in any modern DICOM image viewer.

A phantom was built to create an object whose shape would create CT images with highly convoluted indistinct borders and would have many voxels that would contain both the object and the surrounding substance. The substances were chosen to approximate the densities of human non-lipid-containing parenchymal organs and normal human fat. Around 750 spherical beads of different sizes, made of poly(methyl methacrylate) (PMMA), which has a density of 1.19 g/cm3, were used to create the central object. These spheres varied in diameters between 3.2 and 6.4 mm, with a total volume, measured by water displacement, of 35.5 cm3.
Pure petroleum jelly (Vaseline®, Unilever, Trumbull, CT, USA), which has a density ranging from 0.82 to 0.87 g/cm3 and a melting point between 40° and 50° Celsius [20] versus a 160° Celsius melting point for PMMA [21], was used to represent fat.
A portion of the petroleum jelly was kept at room temperature, at which it is semi-solid. The center of its superior surface was scooped from it, leaving a concave surface deeper in the middle than at the edges. The spherical beads were then placed on this concave surface, where they formed a conglomerate structure with multiple contact points among the bead surfaces. The remainder of the jelly was then melted and gently poured over and around the PMMA beads. The phantom was then kept at room temperature to allow the melted jelly to solidify. Gentle pouring of the melted jelly and slow cooling permitted solidification of the entire structure without trapping bubbles of air.
The phantom was scanned with a 64-slice LightSpeed VCT (GE, Milwaukee, WI, USA) CT scanner. Scan parameters were: 120 kV, 300 mA, 0.6 s rotation, pitch of 1.375. Axial images were reconstructed using a 14 cm reconstruction diameter, Standard kernel, ASiR (Adaptive Statistical Iterative Reconstruction) of 50%, and scan thicknesses of 5.0 and 0.625 mm. The scan was run three times.

Images were viewed using Centricity PACS Radiology RA1000 Workstation and Exam Manager (GE Healthcare, Barrington, IL, USA).
The first step of calculating the volume of the beads within the petroleum jelly was to establish the average CT densities of the petroleum jelly and beads. The thin (0.625 mm) slices were used for this purpose. The density of petroleum jelly was established by drawing a ≈ 10 cm2 region of interest (ROI) on a region containing only petroleum jelly (Figure 1). For PMMA beads, the average density was determined by drawing circular ROIs on ten beads, randomly selected, of various sizes (Figure 1). To avoid any volume averaging with petroleum jelly, thin slices (0.625 mm) were used and, in addition, the small ROI (≈1/4 to 1/3 the size of the bead) was drawn inside the bead in the slice where the bead appeared largest.
The second step was to draw an ROI in each of the slices that included any portion of the beads. A freehand ROI drawing option was used to ensure that no other pixels other than the jelly and the beads were included, as seen in Figure 2. For each slice, the mean density in Hounsfield units (HU), standard deviation (SD), and the area of the ROI in mm2 were shown on the workstation image. Both the mean density and area were recorded.
The final step was to estimate the volume (in cm3) of the beads. The principle used was that, for a given area of the mixture in any slice, the fraction (f) of the beads contained in this area may be estimated as: where is the average CT# of the ROI of the mixture, is the average CT# of the petroleum jelly, and is the average CT# of the beads. This was calculated for all the slices containing the mixture.
Therefore, the volume in cm3 was calculated as: where i is the slice number, T is the slice thickness, N is the total number of slices which contained the mixture and A is the area in mm2. Since both the area and slice thickness were in mm, 1/1000 converts the result into cm3.
Relative error was used as the accuracy index of the calculated volume and was estimated as:

To examine the influence of scanning and reconstruction parameters, the following tests were performed:
In each case, volume was then calculated using the same formulae (Equations (2) and (3)) given in the previous section.

Our method of using partial volume calculations to find the volume of a material mixed with, and fully contained in, another material was experimentally validated as being highly accurate using a phantom of acrylic beads embedded in petroleum jelly. The method is robust; no large errors are introduced by changing slice thicknesses, regions of interest, reconstruction planes or pixel size; it can be easily employed without specialized software. The method should be useful in the volume assessment of structures with highly convoluted configurations when it and the surrounding tissues are of homogeneous and different densities. It is robust, simple, remains quite accurate even when slices are thick and reconstructed in planes other than the acquisition plane, and can be performed efficiently in the absence of specialized software. 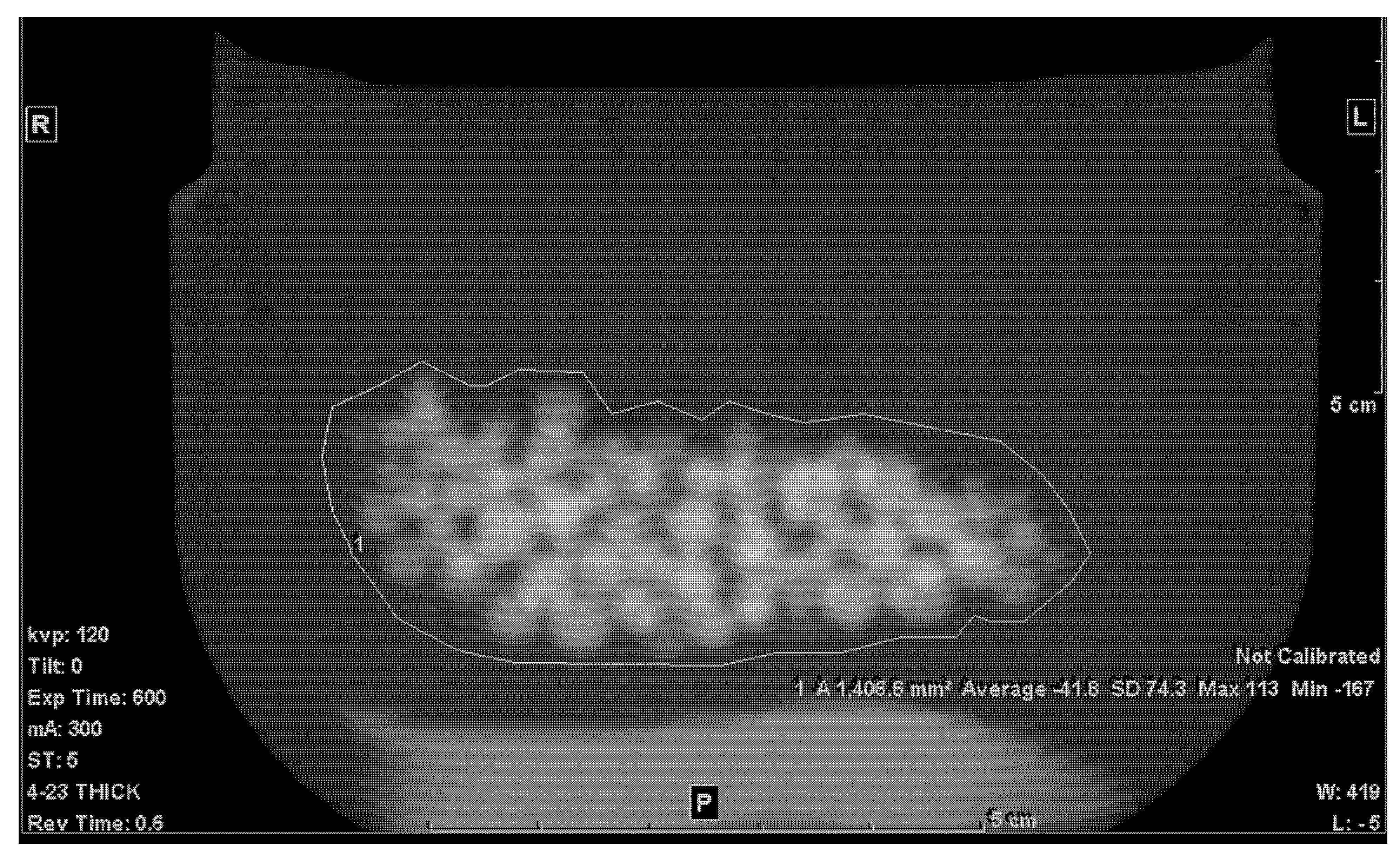 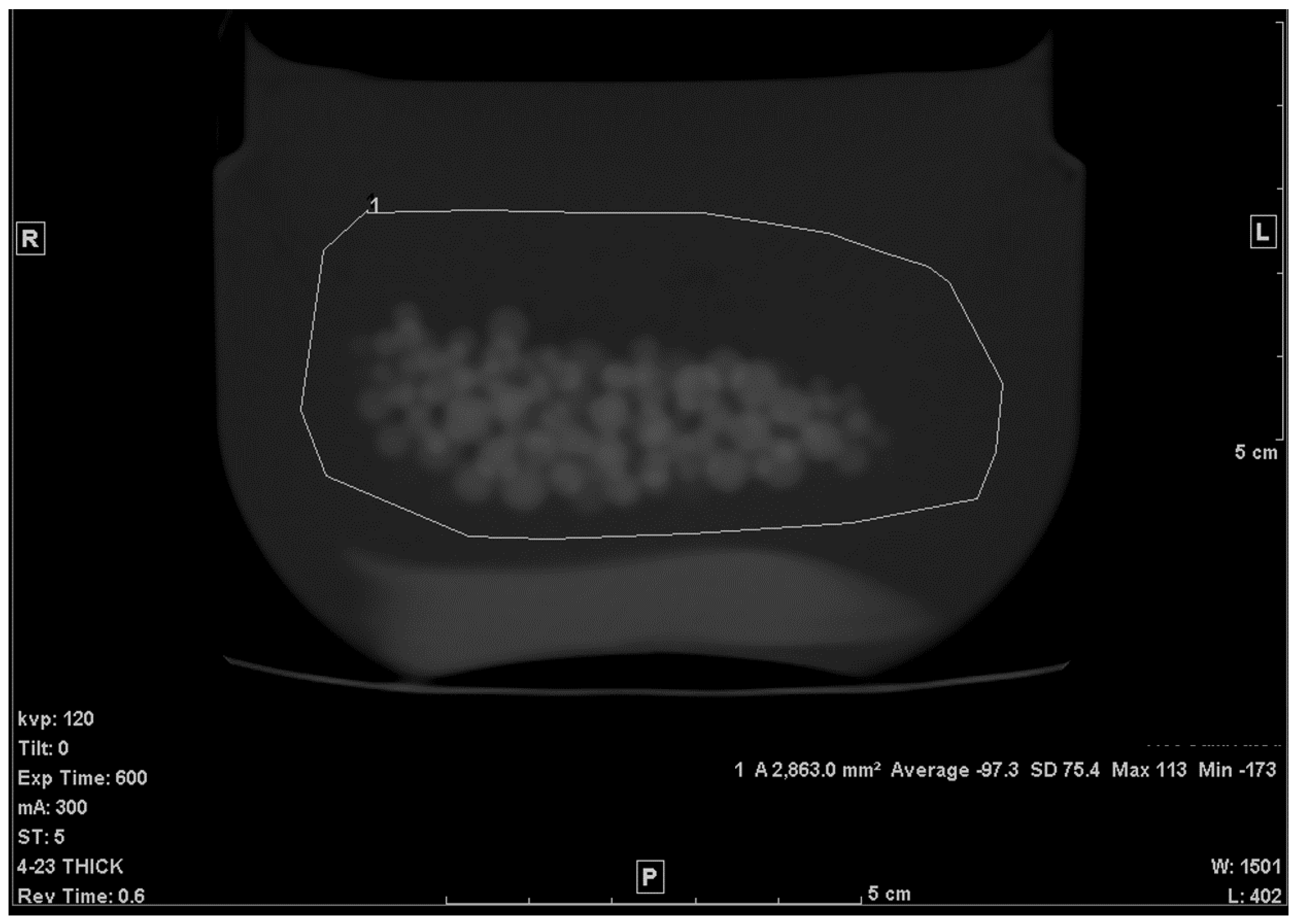