Application of Bionic Technologies on the Fracturing Plug

The rapid development of unconventional oil/gas has been led to tremendous changes in the global energy industry. According to the U.S. Energy Information Administration’s International Energy Outlook 2016, the production of unconventional gases, including tight gas, shale gas, and coal bed methane, will increase from 0.8227 trillion cubic meters in 2015 to 2.48 trillion cubic meters in 2040. Over the same period, the production of unconventional oil, including tight oil, shale oil, extra-heavy oil, field condensate, and bitumen, will increase from 0.480 billion tons to 1 billion tons [1]. As one of the key technologies used in unconventional oil/gas development, multi-stage hydraulic fracturing technology of horizontal wells can effectively increase production.
Hydraulic pumping bridge plug staged fracturing technology has the advantages of a reliable seal, unlimited staged fracturing, and a short fracturing cycle. During the fracturing operations, the plug is pumped down and set on the first target position, and then the perforating and fracturing processes are carried out successively. The same fracturing operation is repeated for the remaining stages. Conventional drillable plugs are widely used today, but the drilling of conventional plugs is time-consuming, expensive, and high risk [1].
Currently, the dissolvable bridge plug has been developed, and this kind of plug can dissolve in wellbore fluid, which eliminates the plug-drilling procedure [2,3]. Once the dissolvable plugs contact the well liquids in the wellbore, the dissolving process will begin. Generally, the early pump-down plugs are severely corroded, especially for horizontal wells with lots of stages. In this situation, the high released pressure of the fracture zone will cause many unpredicted difficulties and risks to the ongoing operations. Therefore, the early pump-down plugs should not dissolve too quickly, and the dissolving rates of all plugs in the wellbore should be controlled to some degree.
There are many methods to affect the dissolving rate of the plug, such as the material composition, surface coating, structure design, etc. Surface treatment is one of the most important methods to influence the dissolving rate of the material [4].
Nature is a source of innovations and solutions for many technological problems, and it has inspired the development of technologies in many fields. In recent years, in the material surfaces field, bio-inspired functional surfaces have been a very hot research topic [5,6,7,8,9]. It is well known that the lotus leaf has a natural hydrophobic behavior due to the surface topography of the lotus leaves having a special roughness structure, which is strongly related to the hydrophobicity of the lotus leaf. Inspired by that, designing microstructures of dissolvable material surfaces might be an effective way to change the contact status with the surrounding fluid and thus influencing the initial dissolving rate of the plug.
In this paper, the dimple surface textures were fabricated on the dissolvable magnesium alloy substrates by a laser surface texturing technique. The surface morphologies of the symmetrically distributed dimple surface textures were observed by an optical microscope and white-light interferometer. The microstructure of the dimple unit and the chemical compositions were characterized by a scanning electron microscope and energy-dispersive X-ray spectrometer. The water contact angles and the dissolution characteristics of the samples with and without dimple surface textures were then tested. The relationship between the wettability and the dissolution rate was discussed.

Dissolvable magnesium alloy samples with dimensions of Φ45 mm × 4 mm were used as the substrate materials. For the material specifications, refer to Pei’s report [10]. Laser beam machining was used to fabricate the symmetrically distributed DST. The laser source used was a fiber nanosecond pulse laser with a maximum power output of 20 W and a center wavelength (λ) of 1064 nm. The dimple unit diameter of Φ100 μm was designed, and the area densities of the dimples were 10%, 20%, and 30%, respectively. The laser machining process was conducted in the atmosphere.

2.2. Characterizations of Surface Morphology and Wettability

The surface morphologies of the DST samples were examined by using an optical microscope. The three-dimensional micrograph of the dimple surface texture was characterized by using a white-light interferometer. The morphology and size of the samples were observed by JSM-7001F scanning electron microscopy at 15 K eV. The chemical compositions were analyzed by using an energy-dispersive X-ray spectrometer. The water contact angles were measured by using a contact angle meter with a 5 μL water drop at room temperature. The average values of the water contact angles were obtained from at least three measurement positions on each sample.

The samples with and without dimple surface textures were immersed in the 2% KCl solutions at temperatures of 85 °C. All samples were taken out from the solutions every 6 h and were dried by using a hot-air blower. Then, the remaining weight of the samples was measured by using a precise electronic balance.

This research was funded by PetroChina research funding and national science and technology project of China. 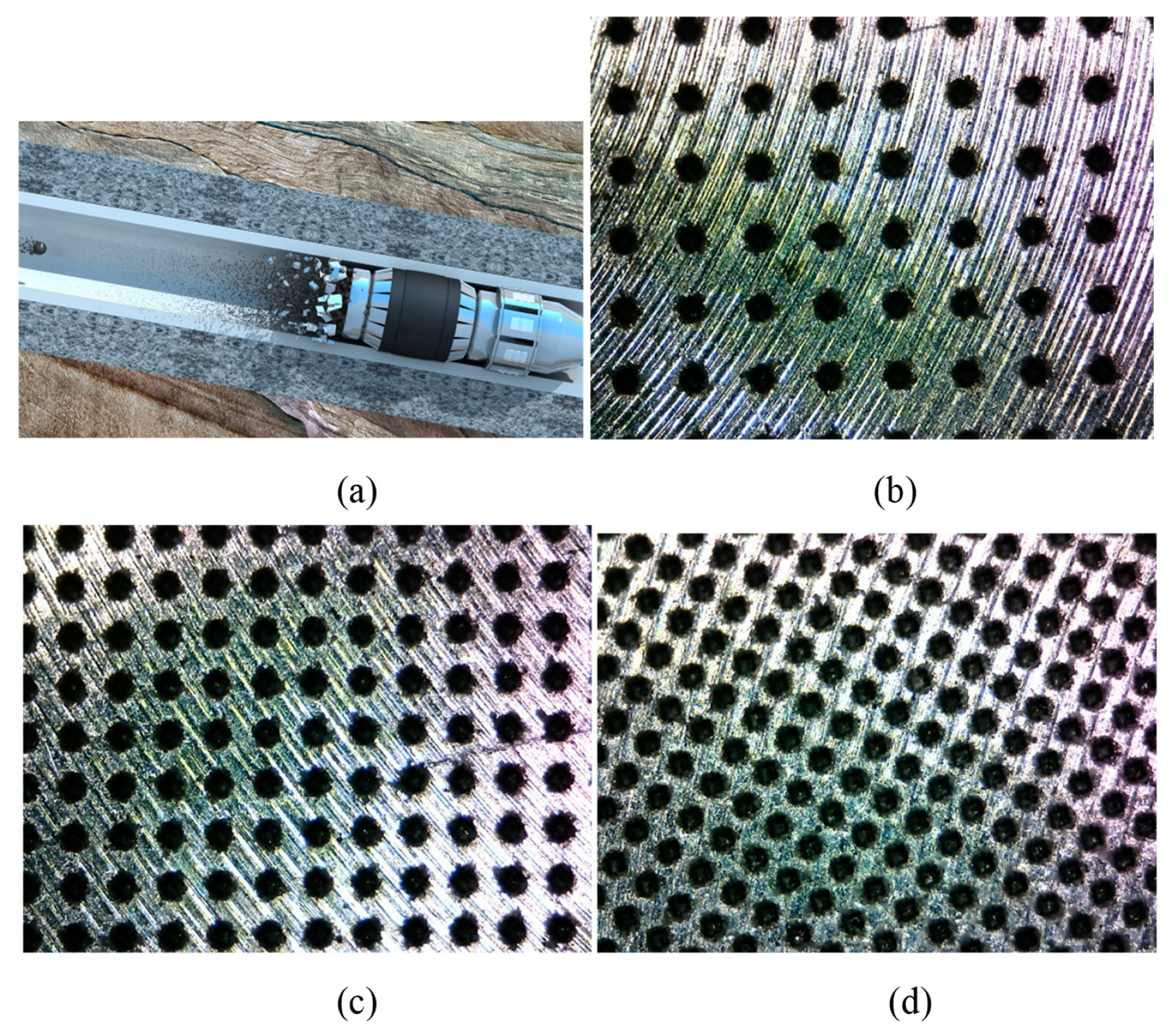 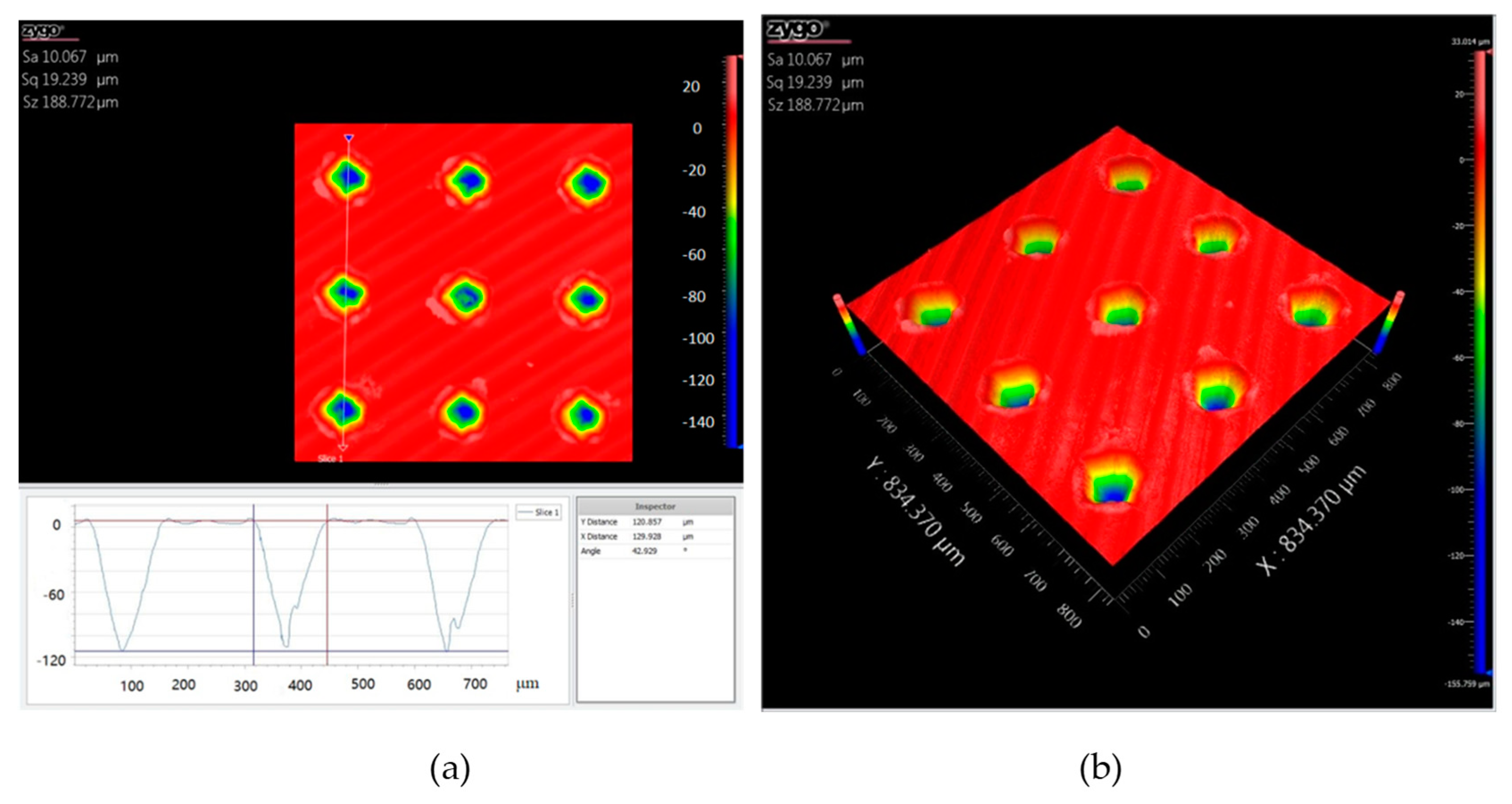 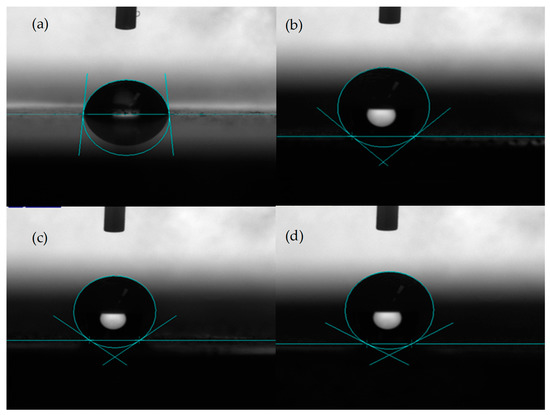 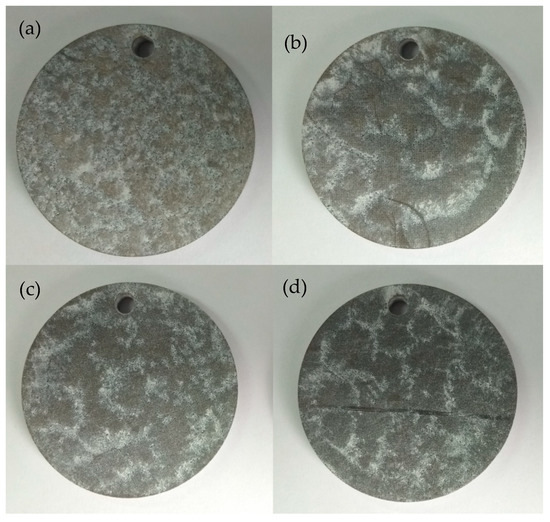