Design of a Bio-Inspired Anti-Erosion Structure for a Water Hydraulic Valve Core: An Experimental Study

:
Heat control has been a momentous problem in engineering areas which include manufacturing, aeronautics, microchips and so forth for a considerable amount of time. The control of material for thermal deformation, effective cooling are the key components of the aero crafts and compactly laid out microchips are urgently needed for improvement. In a micro-scale, researchers are mainly focused on the mechanism, design, improvement and heat transfer of straight channels other than developing other types of channels. A previous study on the carnivorous plant, Nepenthes alata, indicates that the water can be transported continuously and directionally on the surface of the rim of the pitcher because of its multi-scale structures. Meanwhile, the transporting speed is much higher than what was thought previously. Inspired by this unique phenomenon, the heat management ability of this biological micro channel is investigated in this research. Firstly, based on existing studies, the features of the biological channels are extracted. Then, the unidirectional channels are designed and fabricated by elliptical vibration cutting accordingly. The experimental platform for thermal control was established consequently. Both bio-inspired and straight triangular channels of the same depth and width were set for comparison. Through the comparative experiments, it is concluded preliminarily that the critical point of heat transfer performance of the two channels exists, and the biomimetic structure can improve and strengthen the cooling effects at a large flow rate because of the unique geometric structure. The temperature reduction of the bio-inspired channels can be increased by up to 84 percent compared with straight channels in a single experiment when heated up to 150 centigrade.
Keywords:
heat management; cooling; micro channels; directional water transport

Heat control is significant in engineering areas, especially for microchips and MEMS system. As the technology advances, the systems are designed more compactly and more heat is generated, lowering the control stability. However, heat causes temperature noise which influences the accuracy of the measurement system. Therefore, micro cooling devices are in demand to avoid rapid temperature rises and uneven temperature distribution [1].
Micro scale heat transfer has been an extensively discussed topic during the last 20 years [2]. The mechanism, design, improvement and heat transfer of parallel straight micro channels have been numerically and experimentally studied extensively [3,4]. Kim et al [5] studied the annular condensation heat transfer over micro channels with a hydraulic diameter of 1 mm and announced that maintaining annular flow in a large fraction of the micro channels with thin liquid film is the crux to high condensation heat transfer. Naphon et al discovered the geometry configuration and the size of roughness irregularities of the micro channels is significant to the enhancement of heat transfer [6], and Sahar et al found aspect ratio is not a major factor by numerically analyzing the single-phase flow and heat transfer in single channel [7]. While the heat transfer performance of deep channels is proved to be better than that of shallow channels theoretically and experimentally [8,9,10].
Researchers come up with other ideas to enhance the heat transfer performance in a micro scale instead of adjusting geometry parameters of the straight channels. Suspended nano particles are added to the liquid to increase thermal properties as the thermal conductivity of solids is better than that of liquid. There is a significant rise in the heat transfer performance using nanofluid as the transfer media instead of deionized water at the same Reynolds number [11,12]. There are differences between the various types, shapes and volume fractions of particles [12,13]. Thermal conductivity of the suspended nanofluid can increase by over 20% with low particle concentrations (1–5 vol%) [14,15,16].
Other studies indicate that the alteration of the shape of the channels can enhance the heat transfer performance. The micro-heat-exchanger using porous channels are shown to be better in heat transfer than using micro channels [17]. Huang et al studied the three types of micro channel heat sinks, finding the setup of the slot structure in the micro-channel heat sinks can improve the heat transfer and the performance of trapezoidal stagger-slot channels was the best [18]. And the design of ladder shaped micro channels by Brinda et al [19] decreases the thermal resistance and increases heat transfer coefficient. However, the channels mentioned above are mainly fabricated by lithography, wire cutting and laser beam machining. These manufacturing methods are very effective and economic while processing simple structures in micro scale. But when it comes to repeated complex structures, this technology becomes inefficient and costly. Therefore, the alternation is restricted. As the number of studies on different types of channels is still limited, the design of the different types of micro channels is still noteworthy. This research discusses the heat transfer performance of micro-channels inspired by Nepenthes alata.
Directional water transport was discovered on the rim of the pitcher of the carnivorous plant, Nepenthes alata [20]. The multiscale structure which optimizes and enhances the capillary rise in the transport direction and pins the back flow on the surface plays a leading role in unidirectional water transport. However, the transporting speed is much higher than what was thought previously and the anti-gravity water transport can be realized without external added energy (Figure 1).
Inspired by this unique phenomenon, a bio-inspired micro channels was designed and the heat management ability of this biological micro channel was investigated in this research. By comparing the heat transfer performance of the bio-inspired channels and the straight channels in the experiments, the biomimetic channels have proven to hold better temperature reduction performance in certain conditions. This provides a foundation to design a micro-heat-exchanger without external power working on an irregular surface.

2.2. Experimental Design and Set Up

The experiment platform is shown as Figure 3. Absolute ethanol was used as the heat transfer media.
All the test samples for experiments had the same geometry parameters of 40 × 30 × 10 mm. Each test sample had five parallel bio-inspired micro channels (BIMC) and the control group had five parallel straight triangular micro channels (STMC) that were set symmetrically (Figure 3). The holes whose diameter was 1.2 mm are drilled every 5 mm on both the lateral sides of the sample. The holes were 7.5 mm in depth so that the inserted thermocouples can test the temperature of the precise middle of the channels. The axis of the holes were 1.7 mm to the surface of the sample (0.6 mm for the radius of the drilled holes, 0.2 mm for structures in the channels and 0.9 mm for interval) to avoid the tilt of drilling damaging the structures in the channels and to keep the distance to the surface as short as possible in order to get the undistorted temperature data of the channels.
A cooper container of 2 mm thick was designed for the experiment to reduce heat loss (Figure 4a). The size of the inner surface of the container was fully fit with the sample. The holes of 2 mm in diameter were drilled for the insertion of the thermocouples. A hole of 5 mm in diameter was drilled on the bottom, and therefore the sample could be withdrawn conveniently after the experiment.
A heating plate made of cast aluminum, which can be heated up to 300 centigrade, was placed beneath the container for heating. A thermocouple was connected at the rear to monitor the temperature. The temperature control system was connected to the thermal plate. The resolution of the temperature control system is 1 centigrade.
K type thermocouples were used in the experiment. The nominal diameter of the thermocouple was 1 mm. During the experiment, the thermocouples were inserted in the holes drilled on the lateral side of the sample. As the thermal resistance of gas is ordinarily higher than solid, the end of the thermocouples should touch the bottom of the drilled holes in order to test the precise temperature of the channels. A multi-path temperature measurement instrument was connected to the thermocouples. The temperature data updated every 4 seconds and 6-path real time temperature can be shown on the screen. The historical data can be converted into excel for data processing.
The micro flowmeter can provide a liquid flow ranging from 7.23324 nL/min to 3.75573 mL/min, using syringes with a diameter ranging from 1 to 5 mm. A syringe with a capacity of 2.5 mL was mounted on the micro flowmeter for liquid injection. The hose joint to the syringe channels, and the liquid to needle tubing hung above the test sample. The flux of the absolute ethanol varied from 50 μL/min to 1000 μL/min.

3.1. Temperature Variation of the Test Sample

3.2. Temperature Reduction Variation along with the Changing Flow Rate

The heat transfer experiment of the biomimetic micro channels was investigated in this paper. The heating temperature ranges from 90 to 150°C and the flow rate varies from 50 to 1000 μL/min during the experiments. Preliminary conclusions can be reached as follows:
In conclusion, compared to STMC, the appropriate application range for BIMC is 400 to 1000 μL/min at the heating temperature of 150 °C, 100 to 300 μL/min at 90 °C and 150 to 200 μL/min at 120 °C. Furthermore, this paper provides researchers with a reference for further application of this BIMC. 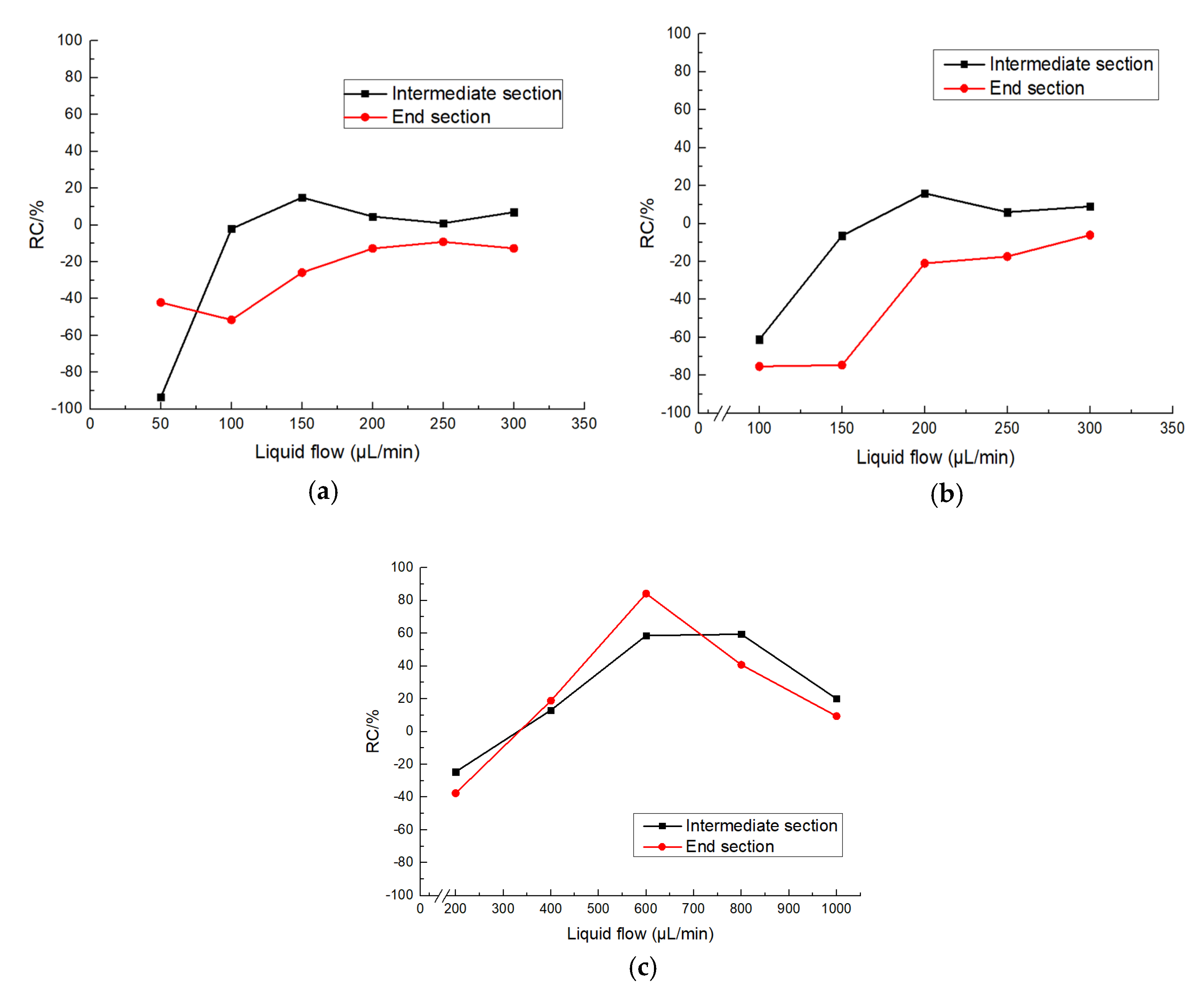