The Friction Properties of Firebrat Scales

Friction is an important subject for sustainability due to problems that are associated with energy loss. In recent years, micro- and nanostructured surfaces have attracted much attention to reduce friction; however, suitable structures are still under consideration. Many functional surfaces are present in nature, such as the friction reduction surfaces of snake skins. In this study, we focused on firebrats, Thermobia domestica, which temporary live in narrow spaces, such as piled papers, so their body surface (integument) is frequently in contact with surrounding substrates. We speculate that, in addition to optical, cleaning effects, protection against desiccation and enemies, their body surface may be also adapted to reduce friction. To investigate the functional effects of the firebrat scales, firebrat surfaces were observed using a field-emission scanning electron microscope (FE-SEM) and a colloidal probe atomic force microscope (AFM). Results of surface observations by FE-SEM revealed that adult firebrats are entirely covered with scales, whose surfaces have microgroove structures. Scale groove wavelengths around the firebrat’s head are almost uniform within a scale but they vary between scales. At the level of single scales, AFM friction force measurements revealed that the firebrat scale reduces friction by decreasing the contact area between scales and a colloidal probe. The heterogeneity of the scales’ groove wavelengths suggests that it is difficult to fix the whole body on critical rough surfaces and may result in a “fail-safe” mechanism. View Full-Text
Keywords: firebrat; friction; AFM; colloidal probe; scale; microstructure firebrat; friction; AFM; colloidal probe; scale; microstructure
►▼ Show Figures 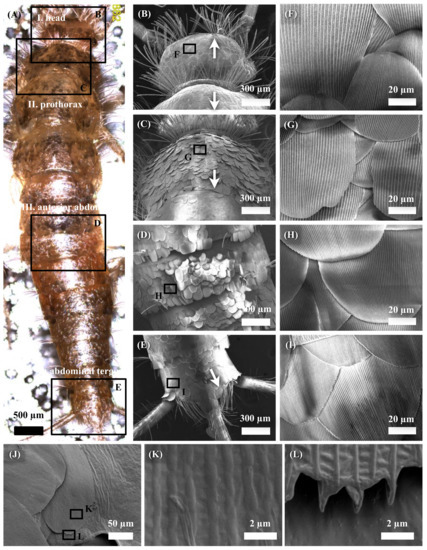