To evaluate the bleaching procedure and application of sodium ascorbate on dentin bond durability, the enamel surface of intact human third molars (n = 18) were removed, and the teeth were randomly divided into two groups for immediate and six-month bond strength evaluation. The specimens were further assigned into three subgroups according to treatment procedure, as follows: subgroup A, no bleaching (positive control) was performed prior to the etch-and-rinse bonding with single bond and subsequent build-up with Z250 composite; subgroup B, the samples were bleached with 20% carbamide peroxide 6 h/day for five consecutive days prior to bonding; and subgroup C, bleaching was performed as in subgroup B, after which 10% sodium ascorbate was applied on dentin surface for 10 min before the bonding procedures. A microtensile bond strength test was performed and the failure modes were evaluated under a stereomicroscope. The data were analyzed using two-way analysis of variance (ANOVA) and Tukey’s post-hoc tests with a level of significance of 0.05. Bleaching significantly decreased the immediate and six-month bond strength. The application of sodium ascorbate had no significant effect on the immediate and six-month bond strength of bleached specimens. We conclude that the bleaching procedure may decrease the durability of the resin–dentin bond of the tested etch-and-rinse adhesive. View Full-Text
Keywords: teeth bleaching; matrix metalloproteinases; sodium ascorbate; dentin bonding agent teeth bleaching; matrix metalloproteinases; sodium ascorbate; dentin bonding agent
►▼ Show Figures 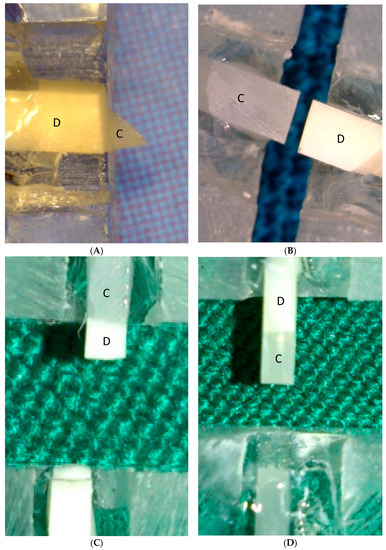