How the Use by Eugenicists of Family Trees and Other Genealogical Technologies Informed and Reflected Discourses on Race and Race Crossing during the Era of Moral Condemnation: Mixed-Race in 1920s and 1930s Britain

Heritage Ethics and Human Rights of the Dead

Thomas Laqueur argues that the work of the dead is carried out through the living and through those who remember, honour, and mourn. Further, he maintains that the brutal or careless disposal of the corpse “is an attack of extreme violence”. To treat the dead body as if it does not matter or as if it were ordinary organic matter would be to deny its humanity. From Laqueur’s point of view, it is inferred that the dead are believed to have rights and dignities that are upheld through the rituals, practices, and beliefs of the living. The dead have always held a place in the space of the living, whether that space has been material and visible, or intangible and out of sight. This paper considers ossuaries as a key site for investigating the relationships between the living and dead. Holding the bones of hundreds or even thousands of bodies, ossuaries represent an important tradition in the cultural history of the dead. Ossuaries are culturally constituted and have taken many forms across the globe, although this research focuses predominantly on Western European ossuary practices and North American Indigenous ossuaries. This paper will examine two case studies, the Sedlec Ossuary (Kutna Hora, Czech Republic) and Taber Hill Ossuary (Toronto, ON, Canada), to think through the rights of the dead at heritage sites. View Full-Text
Keywords: death; bodies; human rights; burial; ethics; tourism; heritage; culture; memory death; bodies; human rights; burial; ethics; tourism; heritage; culture; memory
►▼ Show Figures 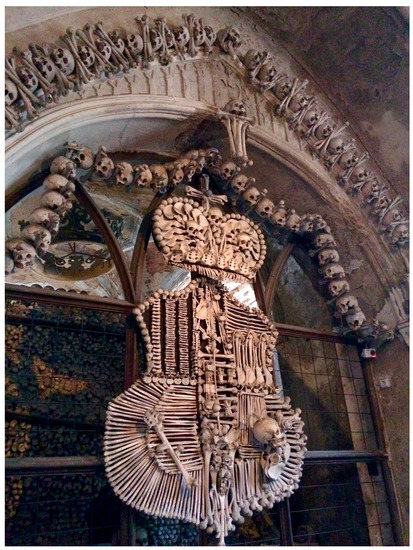