Molecular imaging is used for the diagnosis of oncological, neurological, and cardiovascular diseases [1,2,3,4]. Positron emission tomography (PET) is a molecular imaging technique that enables quantitative measurements of biochemical parameters, such as metabolic changes and concentrations of neurotransmitters [5,6,7]. The demand for preclinical research is increasing worldwide, as it can predict clinical trials and advance our understanding of the pathophysiological mechanisms underlying a specific disease [8].
For this purpose, researchers use micro-PET (µPET), which is a small-animal dedicated system. µPET vendors provide a single bed, thereby allowing imaging of only a single animal at a time. Large-scale research involving many objects thus requires tremendous time and use of radioactivity [9]. Sometimes, house-made multibed systems are used, but these systems are difficult to use with other µPET imaging systems. Recently, MedisoTM (nanoScan®, Mediso Medical Imaging Systems, Budapest, Hungary) developed a multi-bed system dedicated to PEC/CT scanners, and its initial validity for research has been investigated. Hannah et al. tested a four-bed mouse system using 2-deoxy-2-(18F)fluoro-D-glucose (18F-FDG) in phantom and normal mice and reported a quantitative accuracy similar to that of a single-bed [10]. To date, however, few studies have focused on the validity of oncological and neurological PET imaging of the four-mice bed system.
This study aimed to evaluate the image qualities of oncological and neurological PET imaging using a novel four-mice bed system.

We used a cylindrical image quality phantom developed by MedisoTM (Budapest, Hungary), specifically designed for use in four-mice beds. The phantom mimics the shape of the mouse body and is built of a flexible glass material. It consists of three parts: A large uniform compartment, five rods (1, 2, 3, 4, and 5 mm), and a non-radioactive region containing water and air-filled chambers. The diameter and volume of the phantom were 20 and 10 mL, respectively. The diameter of the spill-over-ratio chambers was 5.5 mm.

All experimental procedures were approved by the Institutional Animal Care and Use Committee of the Korea Institute of Radiological & Medical Sciences (IACUC permit number: KIRAMS 2020–0033, 2020-05-22) and conducted in accordance with the National Institutes of Health Guidelines for the Care and Use of Laboratory Animals. Female BALB/c nude mice (age, 6 weeks; weight, 18–20 g; n = 12 for tumor study; n = 8 for brain PET study) were purchased from Central Lab. Animal, Inc. (Seoul, Korea). For the tumor study, a single-cell suspension (4 × 106 cells) was subcutaneously injected into the flanks of 7-week-old mice. Animals were housed in the Institutional Biological Rodent Unit on a 12-h light/dark cycle at room temperature with free access to standard laboratory chow and tap water. They were acclimatized to laboratory conditions for 7 days prior to the experiments.

We used two types of radiotracers. 18F-FDG is a specific biomarker of glucose metabolism. 3-[18F]fluoro-5-(2-pyridinylethynyl)benzonitrile (18F-FPEB) is a specific radiotracer for metabotropic glutamate receptor subtype 5 (mGluR5). Both radiotracers were prepared by nucleophilic substitution of 18F into its precursors (i.e., mannose triflate for 18F-FDG and acetonitrile or dimethyl sulfoxide (DMSO) for nitro-FPEB). After radiosynthesis, we performed quality control examinations. The formulated radiotracers were colorless solutions, showing pH of 7 and 511 keV in a multi-channel analyzer. We found acetonitrile < 400 ppm and DMSO < 5000 ppm as residual solvents. The concentration of endotoxins was below 1.01 EU/mL and both formulated radiotracers passed the sterility test. All radiotracers were prepared according to a previously described procedure [11,12]. The radiochemical purity of the radiotracers was >99%.

Following the guidelines of NEMA NU-4 2008, four phantoms were filled with 3.7 MBq of 18F-FDG in 10 mL of saline and decay-corrected to the start of acquisition. On the first day, four phantoms were imaged in the multi-bed system following the same specifications of the PET manufacturer for single mouse imaging (Figure 1A). After 24 h, a single phantom was imaged using a single-bed system for comparison (Figure 1B). Static PET acquisition was performed using a Mediso nanoScan PET/CT over 20 min, followed by CT (480 projections; 50 kVp tube voltage; 630 µA; 300 ms exposure time; 1:4 binning). Whole-body TeraTomo 3D reconstruction with four iterations and six subsets was performed (1–5 coincidence mode) using an isotropic voxel size of 0.4 mm3.

Whole-body PET images of the mice were obtained using the Mediso PET scanner (Mediso Medical Imaging Systems, Budapest, Hungary). In all the experiments, four animals were scanned in the multi-bed system, and then, single PET images were acquired using the single-bed system 2 days later. For the oncological study, prior to imaging, all mice fasted overnight. The mice were anesthetized with 2.5% isoflurane in oxygen, and 18F-FDG (8.8 ± 0.9 MBq/200 µL) was administrated into the tail vein. Based on previous studies, 18F-FDG images were acquired after 40–60 min [13]. For the brain study, an 18F-FPEB PET tracer (8.7 ± 0.7 MBq/200 µL) was prepared. 18F-FPEB PET images were acquired 30–50 min after injection because the radiotracer initially shows specific-to-nonspecific binding values that reach a plateau after 30 min. The scanner has a peak absolute system sensitivity of >9% in the 400–600 keV energy window, an axial field of view of 28 cm, a transaxial field of view of 35–120 mm, and a transaxial resolution of 0.7 mm at 1 cm off-center. Images were reconstructed using a three-dimensional ordered subset expectation maximization (3D-OSEM) algorithm with four iterations. For attenuation correction, micro-CT imaging was performed immediately after PET using 50 kVp of X-ray voltage with 0.16 mAs. While imaging, we controlled the internal bed temperature using an air pump (MultiCell™ controlled Large pump, Budapest, Hungary) provided by the manufacturer and monitored the body temperature of the animals in real-time using software (Multicell GUI version 2.4, Budapest, Hungary).

To assess the scanner performance of the multi-bed system, we performed NEMA NU-4 2008 tests for a small-animal PET system. To evaluate the spatial resolution of PET images using the four-mice bed system, recovery coefficients (RCs) were calculated for rod diameters of 1, 2, 3, 4, and 5 mm and compared with the results of the single-bed system. Circular regions of interest (ROIs) were drawn around each rod, with diameters twice that of the rods (Figure 1C). Next, the RC values were calculated by dividing the maximum activity detected at each rod by the mean phantom concentration. For uniformity calculation, we drew long cylindrical ROIs (75% of the active diameter) in the center of the uniform region of the phantom. Based on the obtained average activity concentration and maximum and minimum values, the percentage standard deviation (%STDunif) was calculated. To estimate the accuracy of scatter correction, spill-over ratios in the water (SORwater) and air-filled (SORair) cylindrical inserts were estimated as the ratio of the mean activity concentration within the volumes of interest (VOIs) to the mean counts in the uniformity region.

For the tumor PET study, the CT and PET data were co-registered and ellipsoidal VOIs were manually defined for the tumor using PMOD software (version 3.4, PMOD Technologies Ltd, Zurich, Switzerland) (Figure 1D). The maximum standardized uptake value (SUVmax) within the VOI on the PET image was measured. After the PET imaging, all animals were sacrificed, and the tumor size was measured. Based on phantom imaging results, we classified tumors into small (less than 3 mm) and large (>4 mm) tumor size groups and evaluated the tumor detection capability of the multi-bed system against the single-bed system. The decay-corrected radioactivities were normalized in units of SUV to normalize the differences in injected dose and body weight. The SUV was obtained by dividing the tissue radioactivity concentration by the injected dose and mouse body weight. For mouse brain data analysis, a house-made brain MR template was used [14]. Next, PET images were spatially normalized based on the T2-weighted mouse brain MR template (M. Mirrione), embedded in PMOD software, masked to exclude extra-cerebral signals, and smoothed with a 3D Gaussian filter (full width at half maximum = 1.0 mm). The striatum and hippocampus were selected as VOIs on the MR template (Figure 1E), and the mean SUVs were recorded.

This research was supported by a grant from the Korea Institute of Radiological and Medical Sciences (KIRAMS), funded by the Ministry of Science and ICT (MSIT), Republic of Korea (50461-2021) and by the Basic Science Research Program through the National Research Foundation of Korea (NRF) funded by the Ministry of Science, ICT & Future Planning (NRF-2020R1A2C2008618).

The care, maintenance, and treatment of animals in the study followed protocols approved by the Institutional Animal Care and Use Committee of the Korea Institute of Radiological & Medical Sciences (IACUC permit number: KIRAMS 2020–0033, 2020-05-22). 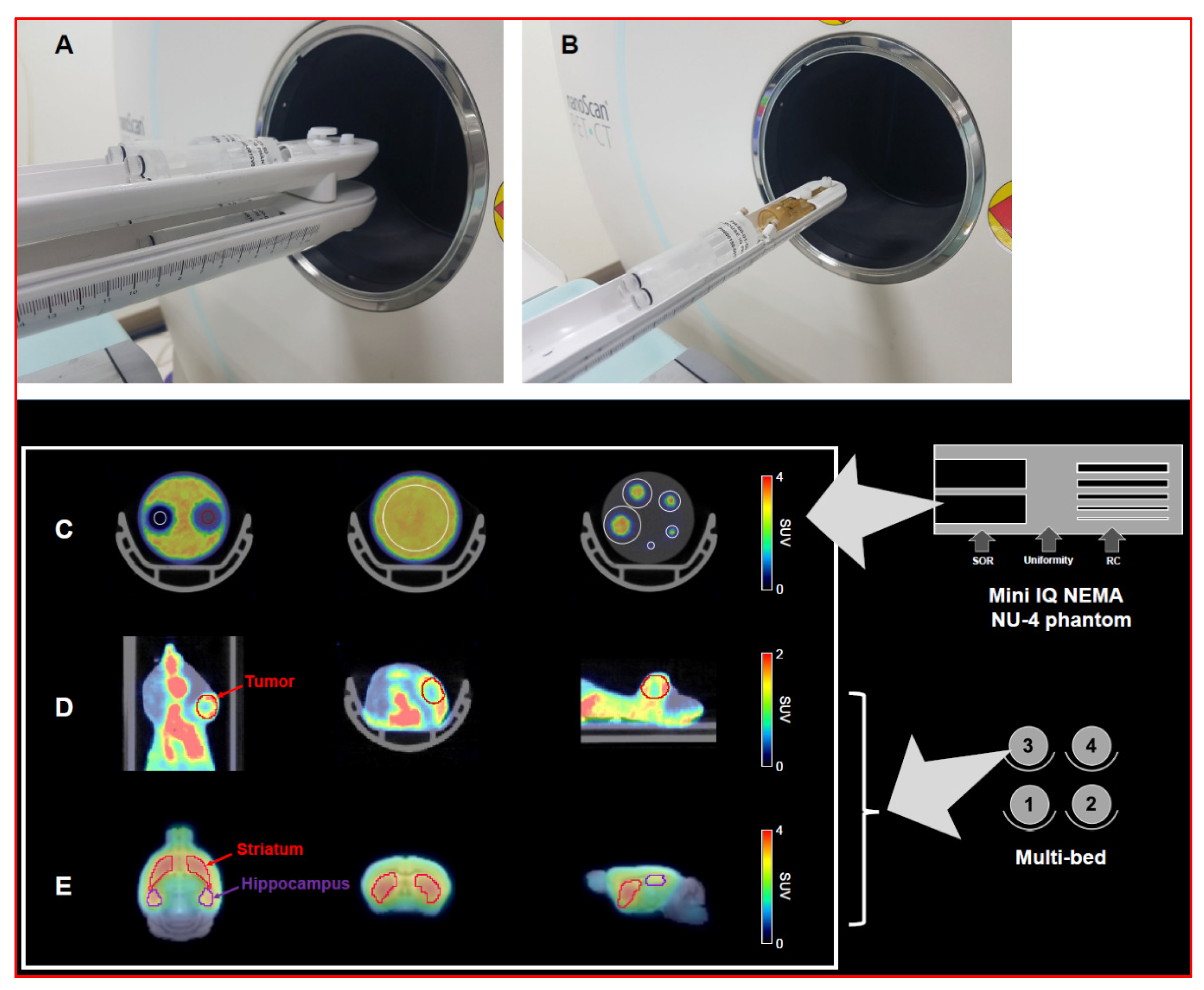 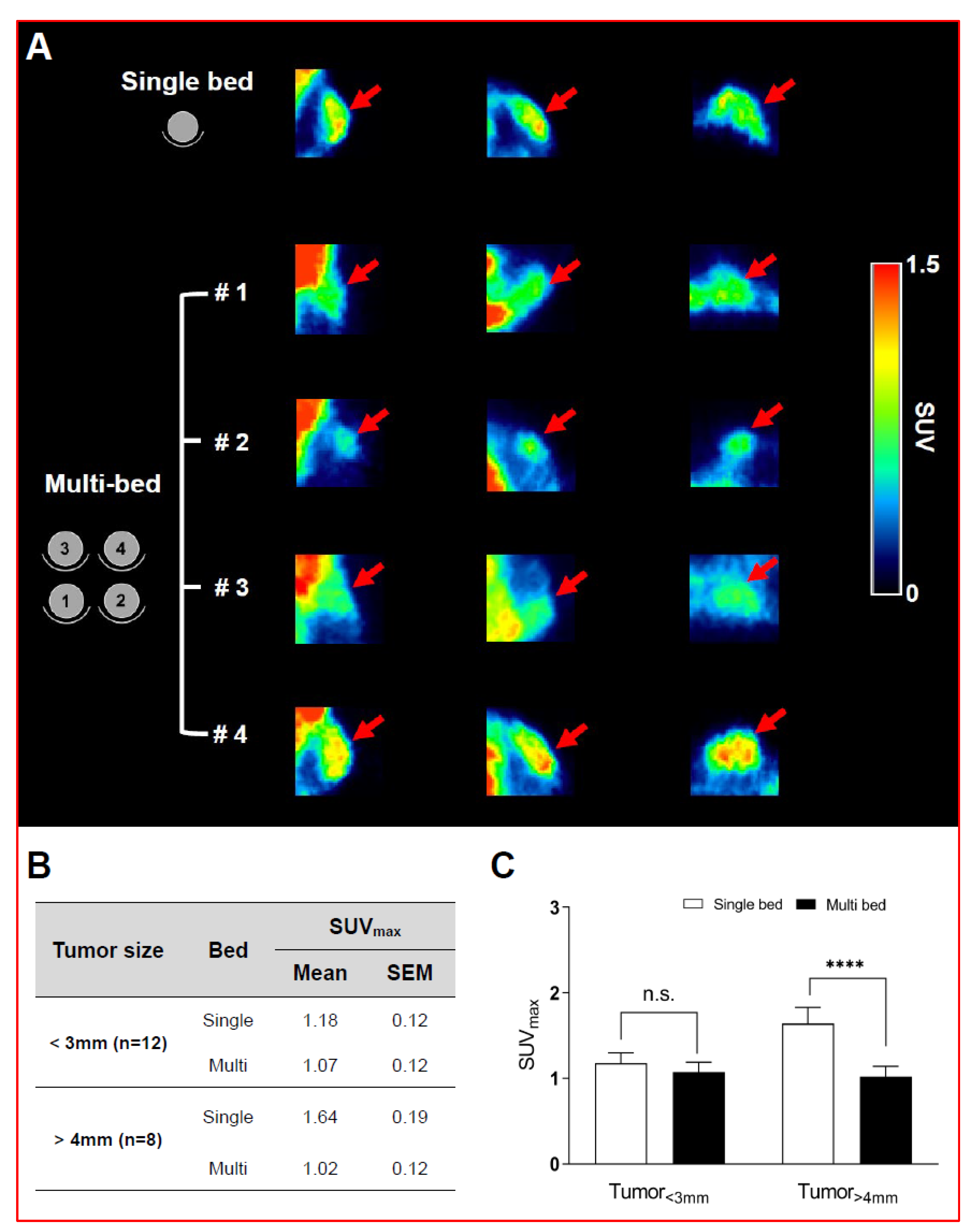