Regardless of the influence of the scene illumination, the human visual system can recognize object colors through its ability known as color constancy [1]. In the image processing pipeline of almost every digital camera, there is also a part dedicated to computational color constancy [2]. It first estimates the scene illumination and then uses it to chromatically adapt the image i.e., to correct the colors. For a more formal problem statement, an often used image formation model written under Lambertian assumption is given as [3] where is a color channel, is a given image pixel, is the wavelength of the light, is the visible spectrum, is the spectral distribution of the light source, is the surface reflectance, and is the camera sensitivity of color channel c. Assuming uniform illumination for the sake of simplicity makes it possible to remove from and then the observed light source color is given as
The direction of provides enough information for successful chromatic adaptation [4]. Still, calculating is an ill-posed problem because only image pixel values are given, while both and are unknown. The solution to this problem is to make additional assumptions. Different assumptions have given rise to numerous illumination estimation methods that can be divided into two main groups. First of these groups contains low-level statistics-based methods such as White-patch [5,6] and its improvements [7,8,9], Gray-world [10], Shades-of-Gray [11], Grey-Edge (1st and 2nd order) [12], Weighted Gray-Edge [13], using bright pixels [14], and using bright and dark colors [15]. The second group includes learning-based methods such as gamut mapping (pixel, edge, and intersection based) [16], using neural networks [17], using high-level visual information [18], natural image statistics [19], Bayesian learning [20], spatio-spectral learning (maximum likelihood estimate, and with gen. prior) [21], simplifying the illumination solution space [22,23,24,25], using color/edge moments [26,27], using regression trees with color distribution statistics features [28], performing various kinds of spatial localizations [29,30], and using convolutional neural networks [31,32,33].
Statistics-based illumination estimation methods are less accurate than the learning-based ones, but they are faster and simpler to implement in embedded systems, which is one of the reasons for their widespread usage [34] that justifies additional research related to them. In this paper, the so-called green stability assumption is proposed that can be used to fine-tune the values of the parameters of statistics-based methods by using only non-calibrated images without known ground-truth illumination. It is based on observations about the behaviour of the green chromaticity of ground-truth illuminations. The obtained accuracy is practically the same as when using calibrated training images, but the whole process is much faster and it can be directly applied in practice.
The paper is structured as follows: Section 2 briefly describes the best-known statistics-based methods and the most commonly used error statistics, Section 3 proposes the green stability assumption, Section 4 presents the results, and, finally, Section 5 concludes the paper.

Some of the best-known statistics-based illumination estimation methods are centered around the Gray-world assumption and its extensions. Under this assumption, the average scene reflectance is achromatic [10] and is obtained as where is the reflectance amount with 0 meaning no reflectance and 1 meaning total reflectance. By adding the Minkowski norm p to Equation (3), the Gray-world method is generalized into the Shades-of-Gray method [11]:
Having results in Gray-world, while results in White-patch [5,6]. In [12], Equation (4) was extended to the general Gray-world through local smoothing: where and is a Gaussian filter with standard deviation . Another extension is the Grey-edge assumption, under which the scene reflectance differences calculated with derivative order n are achromatic [12] so that
The described Shades-of-Gray, general Gray-world, and Gray-edge methods have parameters and the methods’ accuracy depends on how these parameters are tuned. Nevertheless, in the literature, it often appears as if they require no training [3,15], which is then said to be an advantage. It may be argued that the parameter values are in most cases the same, but this is easily disproved. In [15] for methods mentioned in this section, the best fixed parameter values were given for ten different datasets. These values are similar for some datasets, but overall they span two orders of magnitude. With such high differences across datasets in mind, it is obvious that the parameter values have to be learned. Therefore, later in Section 4 in experimental results, the originally reported results are also compared to the newly calculated revisited results where the accuracy was obtained by performing learning and cross-validation. Although the mentioned methods’ accuracy is lower than the one of state-of-the-art methods, they are still widely used because of their simplicity. Empirical evidence for this was given in, e.g., Ref. [34], where the claim that “most commercial cameras are doing white balance based on the best-known Gray-World assumption” has been successfully used for forensic tasks.

The methods mentioned in Section 2 are some of the most widely used illumination estimation methods [34] and this means that their parameters should preferably be appropriately fine-tuned before putting them in production. The best way to do this is to use a benchmark dataset, but, because of dependence of Equation (2) on , a benchmark dataset would be required for each used camera sensor. Since putting the calibration objects into image scenes and later extracting the ground-truth illumination is time-consuming, it would be better to perform some kind of unsupervised learning on non-calibrated images i.e., to learn from images for which the ground-truth illumination is unknown.

The value of Pearson’s linear correlation coefficient for the points in Figure 3 is , which indicates a strong positive linear relationship [43]. In other words, the difference between the standard deviations of green chromaticities of illumination estimations produced by the same method when using different parameter values is strongly correlated to the difference between median angular errors of these illumination estimations. The same experiment was repeated for each of the NUS datasets [15] and the resulting correlations are given in Table 1. For all datasets except for Canon2 (C2), the correlation is significantly high. After analysing the case of C2, the main culprit for its lower correlation was found to be the performance of the general Gray-world algorithm, whose accuracy for higher values of did not change with same dynamic as was the case for other datasets. This is, however, not critical because it represents only a single case of slightly lower correlation.
Based on this empirical results and observations, it is possible to introduce the green stability assumption: the parameter values for which a method’s illumination estimations’ green chromaticity standard deviation is lower simultaneously lead to lower illumination estimation errors. Like many other assumptions, this assumption does also not always hold, but it can still be useful in cases when the ground-truth illuminations for a set of images taken with a given sensor are not available. These images should also be taken under similar illuminations as the mentioned datasets that were used for empirical results. An example of a failure case would be if, for example, the illumination was mostly composed of artificial lights whose colors are spread across the whole chromaticity plane, which would also lead to significant differences in green chromaticity values, but such cases happen only very rarely.
For a specific case when the parameter values of a chosen method are fine-tuned and only non-calibrated images are available, the green stability assumption can be expressed more formally. If n is the number of images in the training set, is the i-th vector of parameter values, is the method’s illumination estimation obtained for the j-th image when is used for parameter values, is the green component of , and is the mean green component of illumination estimations for all images obtained with parameters , then, under the green stability assumption, the index of such that should result in minimal angular errors is obtained as
Since Equation (7) performs minimization of standard deviation, it can also be written without the square and the denominator.

The following benchmark datasets have been used to demonstrate the difference between previously reported and newly calculated accuracy results for methods mentioned in Section 2 and to test the effectiveness of the proposed green stability assumption: the GreyBall dataset [41], its approximated linear version, and eight linear NUS dataset [15]. The ColorChecker dataset [20,44] was not used because of its confusing history of wrong usage [45] despite warnings from leading experts [46]. Except the original GreyBall dataset, all other contain linear images, which is preferred because illumination estimation is in cameras usually performed on linear images [2] similar to the model described by Equation (1).
The tested methods include all the ones from . During cross-validation on all datasets the same folds were used as in other publications. The source code for recreating the numerical results given in the following subsection is publicly available at [47].

Table 2, Table 3 and Table 4 show the previously reported accuracies, the newly recalculated accuracies, and the accuracies obtained by using the green stability assumption. The results clearly confirm the potential and the practical applicability of the green stability assumption. Namely, the results obtained by using the the ground-truth and the results obtained without having the ground-truth i.e., by applying the proposed assumption are very similar. As a matter of fact, in some cases, using the proposed green stability assumption produces results that are even more accurate than when using ground-truth illumination. This also demonstrates the success of the proposed approach to unsupervised learning for most common low-level statistics-based illumination estimation methods.

In most relevant papers, the accuracy results for some of the most widely used statistics-based methods were calculated without cross-validation. Here, it was shown that cross-validation is needed and the accuracy results were revisited. When statistics-based methods are fine-tuned, the best way to do this is by using images with known ground-truth illumination. Based on several observations and empirical evidence, the green stability assumption has been proposed that can successfully be used to fine-tune the parameters of most common statistics-based methods when only non-calibrated images without ground-truth illumination are available. This makes the whole fine-tuning process much simpler, faster, and more practical. It is also an unsupervised learning approach to color constancy. In the future, other similar bases for further assumptions that enable unsupervised learning for color constancy will be researched.

This work has been supported by the Croatian Science Foundation under Project IP-06-2016-2092.

We thank the anonymous reviewers for their kind suggestions. 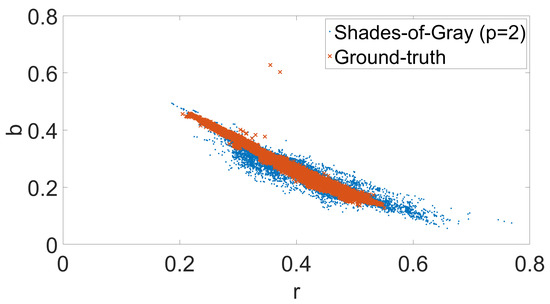 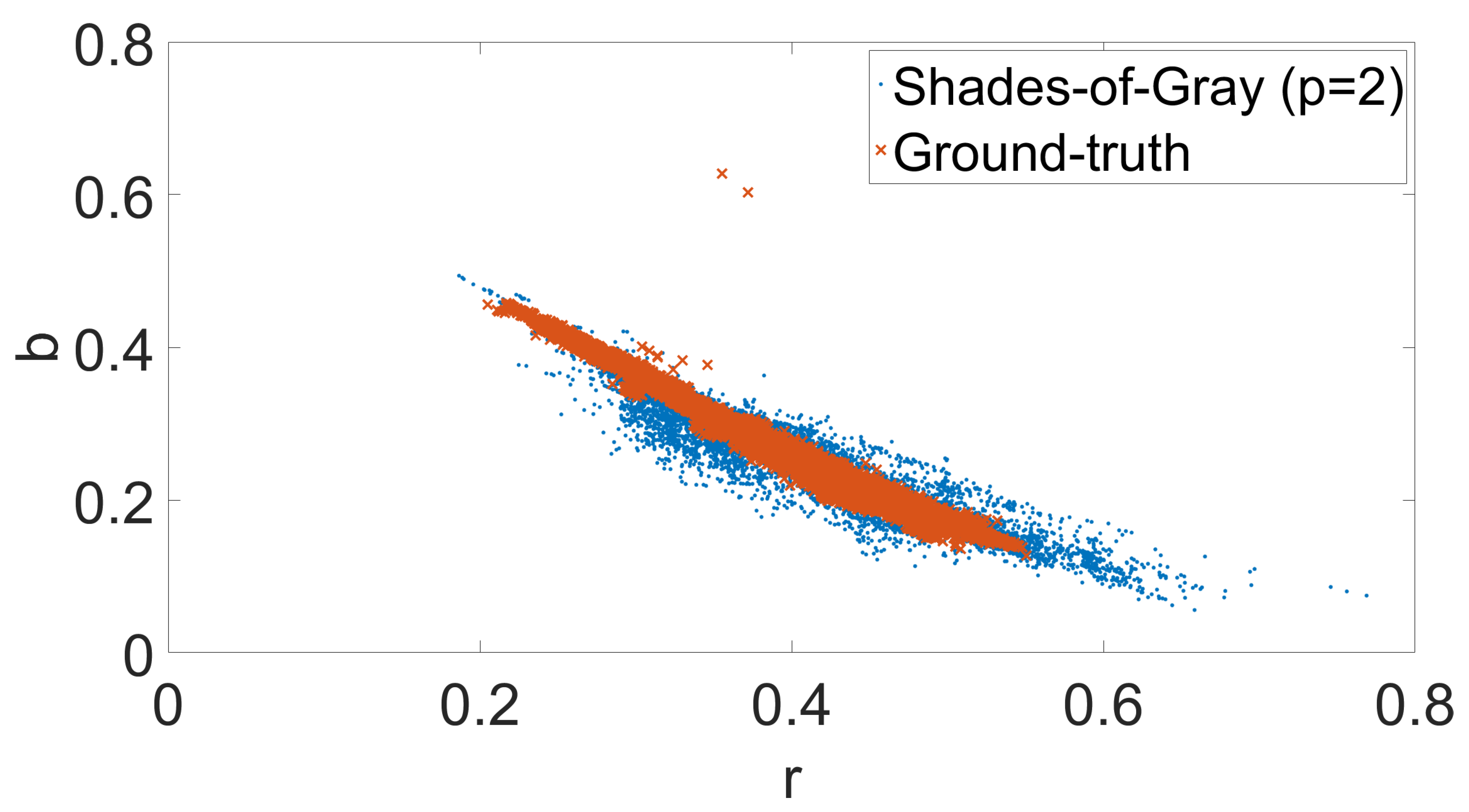 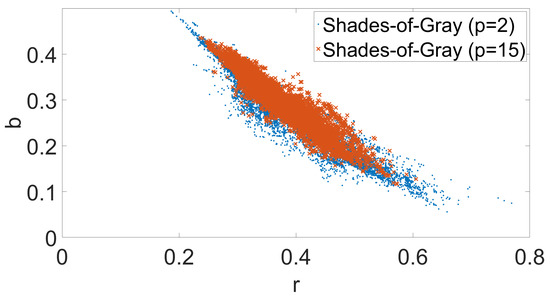 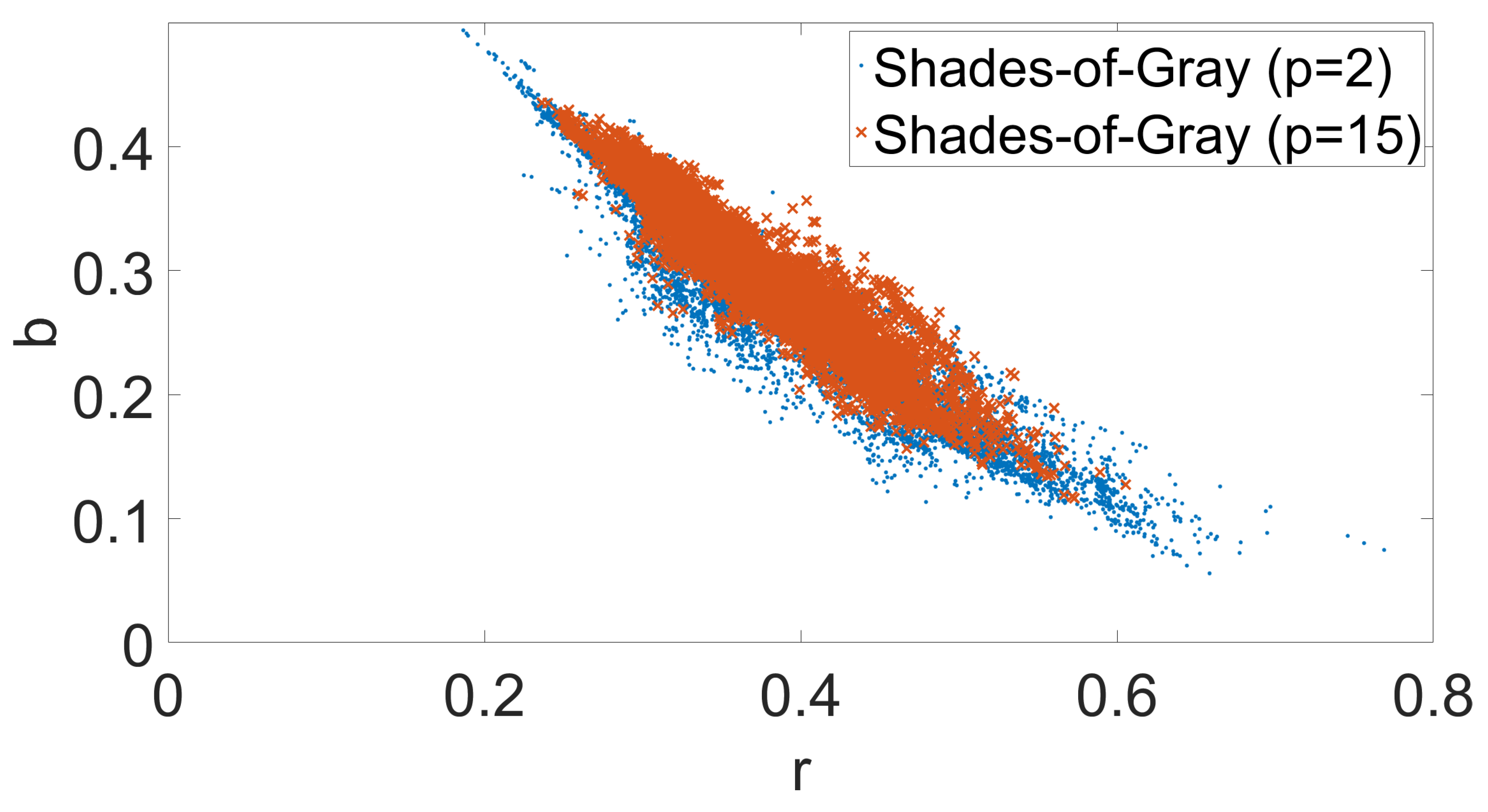