(1) Background: Since early yield prediction is relevant for resource requirements of harvesting and marketing in the whole fruit industry, this paper presents a new approach of using image analysis and tree canopy features to predict early yield with artificial neural networks (ANN); (2) Methods: Two back propagation neural network (BPNN) models were developed for the early period after natural fruit drop in June and the ripening period, respectively. Within the same periods, images of apple cv. “Gala” trees were captured from an orchard near Bonn, Germany. Two sample sets were developed to train and test models; each set included 150 samples from the 2009 and 2010 growing season. For each sample (each canopy image), pixels were segmented into fruit, foliage, and background using image segmentation. The four features extracted from the data set for the canopy were: total cross-sectional area of fruits, fruit number, total cross-section area of small fruits, and cross-sectional area of foliage, and were used as inputs. With the actual weighted yield per tree as a target, BPNN was employed to learn their mutual relationship as a prerequisite to develop the prediction; (3) Results: For the developed BPNN model of the early period after June drop, correlation coefficients (R2) between the estimated and the actual weighted yield, mean forecast error (MFE), mean absolute percentage error (MAPE), and root mean square error (RMSE) were 0.81, −0.05, 10.7%, 2.34 kg/tree, respectively. For the model of the ripening period, these measures were 0.83, −0.03, 8.9%, 2.3 kg/tree, respectively. In 2011, the two previously developed models were used to predict apple yield. The RMSE and R2 values between the estimated and harvested apple yield were 2.6 kg/tree and 0.62 for the early period (small, green fruit) and improved near harvest (red, large fruit) to 2.5 kg/tree and 0.75 for a tree with ca. 18 kg yield per tree. For further method verification, the cv. “Pinova” apple trees were used as another variety in 2012 to develop the BPNN prediction model for the early period after June drop. The model was used in 2013, which gave similar results as those found with cv. “Gala”; (4) Conclusion: Overall, the results showed in this research that the proposed estimation models performed accurately using canopy and fruit features using image analysis algorithms. View Full-Text
Keywords: ANN; back propagation neural network (BPNN); image analysis; machine learning; precision horticulture; sustainability ANN; back propagation neural network (BPNN); image analysis; machine learning; precision horticulture; sustainability
►▼ Show Figures 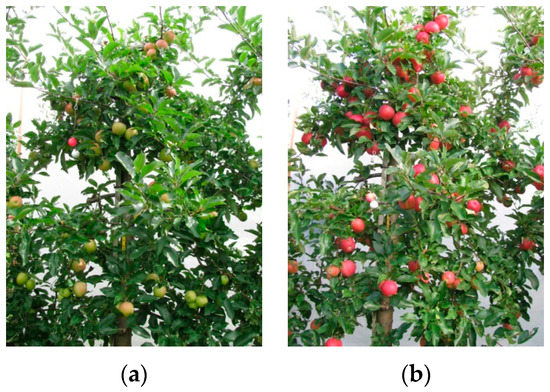