:
Commercial lithium ion cells are now optimised for either high energy density or high power density. There is a trade off in cell design between the power and energy requirements. A tear down protocol has been developed, to investigate the internal components and cell engineering of nine cylindrical cells, with different power–energy ratios. The cells designed for high power applications used smaller particles of the active material in both the anodes and the cathodes. The cathodes for high power cells had higher porosities, but a similar trend was not observed for the anodes. In terms of cell design, the coat weights and areal capacities were lower for high power cells. The tag arrangements were the same in eight out of nine cells, with tags at each end of the anode, and one tag on the cathode. The thicknesses of the current collectors and separators were based on the best (thinnest) materials available when the cells were designed, rather than materials optimised for power or energy. To obtain high power, the resistance of each component is reduced as low as possible, and the lithium ion diffusion path lengths are minimised. This information illustrates the significant evolution of materials and components in lithium ion cells in recent years, and gives insight into designing higher power cells in the future.
Keywords:
commercial lithium ion cells; power density; tear down; power vs. energy; electrode design; materials design 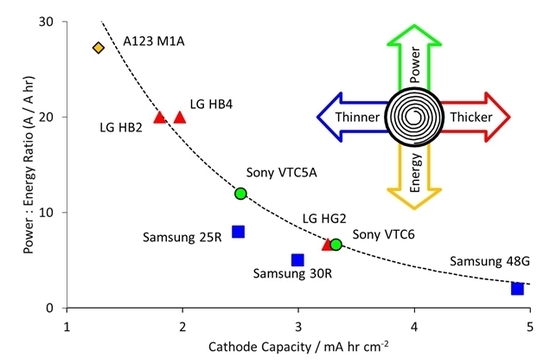 In the years since lithium ion batteries (LIB) were introduced, there have been many developments in cell design and cell chemistry. For example, the volumetric energy density has doubled, through a combination of improved active materials and better cell engineering. With the increasingly widespread use of LIB for new applications, the cells have been optimised for energy (portable electronic devices, mobile phones and battery electric vehicles), or power (power tools, hybrid electric vehicles). For both the cell design and the active materials, there is a trade-off between power and energy. Different manufacturers use different approaches to optimise their cells for high energy density or high power density. This is typically know-how to the manufacturers. The majority of academic investigation in the area of high power lithium ion cells relate to active material design, rather than the equally important aspects of cell design and cell engineering. The relative performance of lithium ion batteries and ultra-capacitors have been compared previously [1,2,3]. In this work, most of the cells investigated were cylindrical 18650 cells, because they are available with different power–energy ratios, from the same manufacturer. This enabled different design approaches and strategies to be compared.
When designing a lithium ion cell, there are a series of design decisions, as summarised in Table 1. The electrode compositions, coat weights, porosities, the current collectors, the separator, the electrolyte and the connection tags are all optimised, to obtain the required cell safety and performance properties. The active materials dictate the choice of binder and type of conductive carbon. Subsequent decisions are around the electrode loading, thickness and porosity. In earlier studies, the influence of electrode coat weight on rate performance and cell resistance have been modelled [4] and measured [5]. Experimentally, better rate performance was obtained with thinner electrodes.
Typically, the requirements for maximum energy density are opposite from those for high power density, a classic engineering trade off. However, the separator thickness is generally specified based on safety or manufacturability. Assuming that the cell is using a liquid electrolyte, there are some choices available in terms of the lithium salt and concentration, the organic carbonate solvent mixture, and the additives. The electrolyte composition will depend on the target operating temperature range of the cells, and the additives will be selected to improve the performance of specific active materials.
As indicated above, this paper describes the disassembly or teardown of commercial lithium ion cells, and the characterisation of their components. This includes physical properties of the electrodes, particularly the areal capacities and porosities, and other cell design parameters.

Nine commercial lithium ion cells have been disassembled, and the differences between high energy density and high power density cells investigated. Some design features were in line with expectations, but others were not:
In summary, this work gives an insight into the limitations of cell and electrode design for high power lithium ion cells. High power density requires the minimisation of every component of the overall cell resistance, based on lower electrode coat weights, thinner separators with lower tortuosity and thicker tags and current collectors. The electrode resistances and lithium ion diffusion path lengths can be reduced by using smaller particle sizes for the active materials, and higher loadings of conductive additives.
For all these cells, the maximum charge rate in the cell specification sheet was much lower than the maximum rate of discharge. Further work to understand the true electrochemical limitations of these electrodes is underway, to give more insight into limitations for high power beyond cell design, which was the focus of this study.

Upon receipt, the cells were subjected to a simple charge–discharge cycle, to leave them in a fully discharged state. The discharge capacities and cell weights were used to confirm that the cells were genuine, as there are some counterfeit cells in the e-cigarette market. The cycles were at ±C/10, with the cell capacities and voltage limits taken from the manufacturers’ datasheets. The average discharge voltage was calculated by dividing the discharge energy (W hr) by the discharge capacity (A hr). This voltage was then multiplied by the maximum continuous discharge current rating, to give the cell power.
After dimensional measurements, the cells were transferred to an argon filled glove box, for disassembly. The top cap was cut open using the groove below the sealing gasket, and the positive tag was then cut. After allowing the volatile components of the electrolyte to evaporate overnight, the can base was cut, enabling the coil to be pushed out of the can. The 18650 cells were cut using a special lathe from MTI. The 21700 cell used a pipe cutter, and then can peeling with pliers. If the coil could not be pushed out of the can, then the can peeling approach was also used. The cell coils were unwound, and the extent of electrode delamination (if any) was observed. The electrodes and separator were weighed and measured, and then immersed in anhydrous dimethyl carbonate (DMC) overnight. This removed the residual electrolyte components, before a second weighing. Pieces of electrode and separator were posted out of the glove box as required, for thickness measurements and examination by SEM.

This work was undertaken as part of a contract with the Advanced Propulsion Centre (www.apcuk.co.uk). WMG gratefully acknowledge this funding from APC. 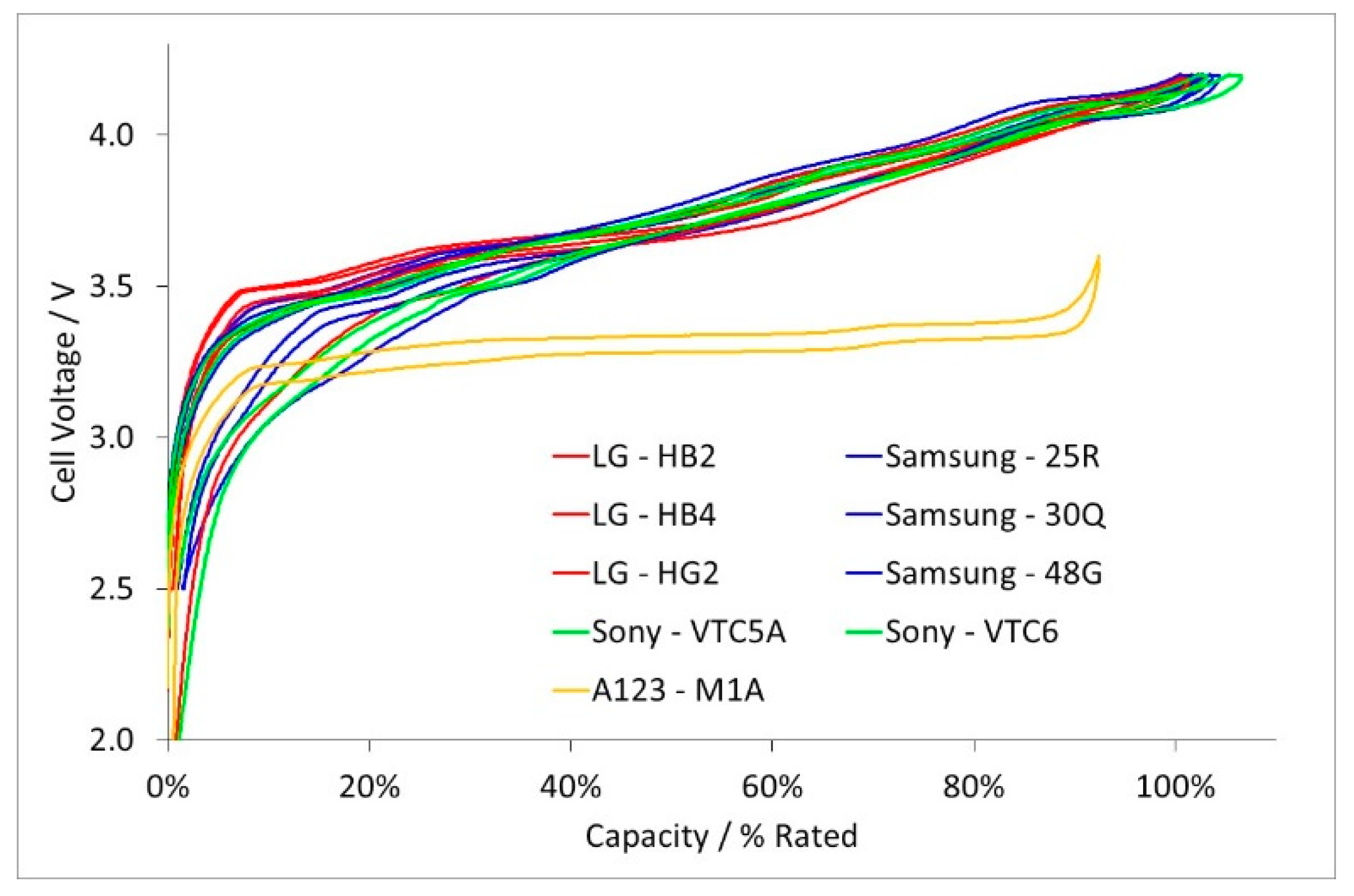 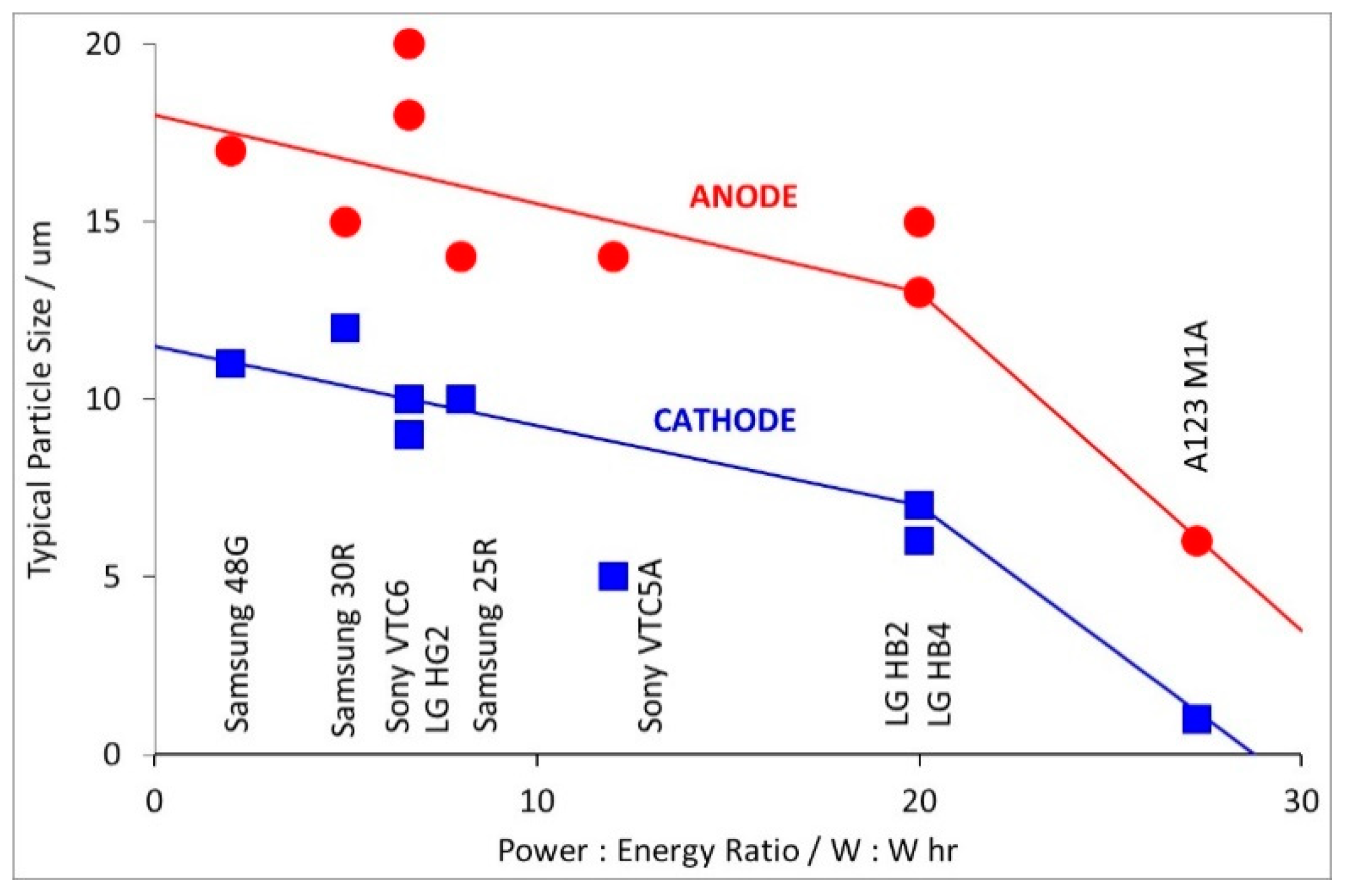