The currently preferred manufacturing method for Lithium-ion battery (LIB) electrodes is via the slurry route. While such an approach is appealing, the complexity of the electrode layers containing the active materials, conductivity helpers, and binders, has hampered detailed investigations of the active materials. As an alternative, an active material can be deposited as a thin film on a planar substrate, which enables a more robust and detailed analysis. However, due to the small areal capacity of nanometric thin films, the electrochemical activity of the cell casing must be negligible or at least well determined. We reported on the capacity and the differential capacity metrics of several materials used in the construction of the electrical terminals in LIBs. Among these materials, Ti was revealed to have the minimum reversible capacity for lithium-ion storage. The mechanical and electrochemical properties of the Ti–based materials were further improved through surface nitridation with thermal treatment in an ammonia-rich atmosphere. The nitridated Ti electrical terminal achieved a reversible capacity that was at least fifteen times lower than that of stainless steel, with a featureless differential capacity representation creating quasi-ideal experimental conditions for a detailed investigation of electroactive thin films. View Full-Text
Keywords: lithium-ion batteries; thin films; electrode terminals; titanium nitride lithium-ion batteries; thin films; electrode terminals; titanium nitride
►▼ Show Figures 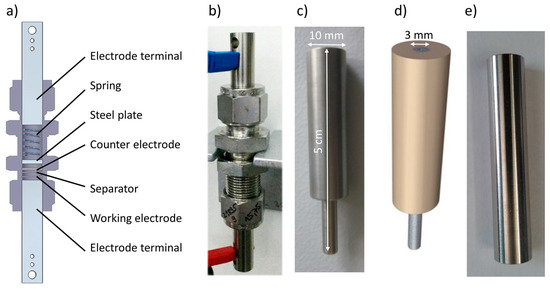