Turnip mosaic virus (TuMV), which is distributed almost all over the world and has a wide range of hosts, mainly brassica crops, was first described in Brassica rapa in the USA. Plant volatile compounds play an important role in the host searching behavior of natural enemies of herbivorous insects. In this study, TuMV-inoculated resistant and susceptible B. rapa lines were tested using volatile metabolome and transcriptome analyses. In volatile metabolome analysis, the volatile organic compounds (VOCs) were different after inoculation with TuMV in resistant B80124 and susceptible B80461, and the degree of downregulation of differentially expressed metabolites was more obvious than the degree of upregulation. Through transcriptome analysis, 70% of differentially expressed genes were in biological process, especially focusing on defense response, flavonoid biosynthetic process, and toxin metabolic process, which indicates that TuMV stress maybe accelerate the increase of VOCs. Integrating the metabolome and transcriptome analyses, after inoculating with TuMV, auxin regulation was upregulated, and ARF, IAA and GH3 were also upregulated, which accelerated cell enlargement and plant growth in tryptophan metabolism. The different genes in zeatin biosynthesis pathways were downregulated, which reduced cell division and shoot initiation. However, the metabolite pathways showed upregulation in brassinosteroid biosynthesis and α-linolenic acid metabolism, which could cause cell enlargement and a stress response. This study determined the difference in volatiles between normal plants and infected plants and may lay a foundation for anti-TuMV research in B. rapa. View Full-Text
Keywords: TuMV; Brassica rapa; GC-MS; VOCs; HIPVs TuMV; Brassica rapa; GC-MS; VOCs; HIPVs
►▼ Show Figures 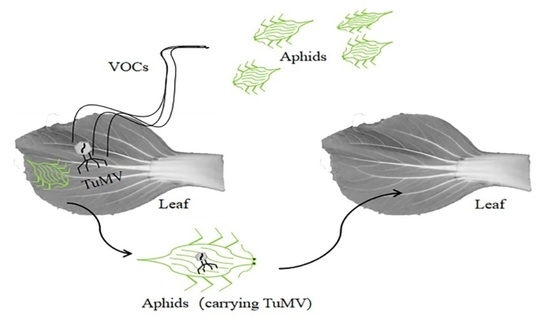