:
The tree tomato (Solanum betaceum Cav.) is an underutilized fruit crop native to the Andean region and phylogenetically related to the tomato and potato. Tree tomato fruits have a high amount of nutrients and bioactive compounds. However, so far there are no studies at the genome or transcriptome level for this species. We performed a de novo assembly and transcriptome annotation for purple-fruited (A21) and an orange-fruited (A23) accessions. A total of 174,252 (A21) and 194,417 (A23) transcripts were assembled with an average length of 851 and 849 bp. A total of 34,636 (A21) and 36,224 (A23) transcripts showed a significant similarity to known proteins. Among the annotated unigenes, 22,096 (A21) and 23,095 (A23) were assigned to the Gene Ontology (GO) term and 14,035 (A21) and 14,540 (A23) were found to have Clusters of Orthologous Group (COG) term classifications. Furthermore, 22,096 (A21) and 23,095 (A23) transcripts were assigned to 155 and 161 (A23) KEGG pathways. The carotenoid biosynthetic process GO terms were significantly enriched in the purple-fruited accession A21. Finally, 68,647 intraspecific single-nucleotide variations (SNVs) and almost 2 million interspecific SNVs were identified. The results of this study provide a wealth of genomic data for the genetic improvement of the tree tomato.
Keywords:
de novo transcriptome assembly; emerging crop; functional annotation; molecular markers; RNA-Seq; Solanaceae; Solanum betaceum; structural annotation

The tree tomato or tamarillo (Solanum betaceum Cav.) is a Solanaceae crop native to the Andean region [1,2]. The tree tomato is phylogenetically related to the potato (S. tuberosum L.) and tomato (S. lycopersicum L.), forming part of the same clade [3]. The tree tomato plant develops into a small tree, even though some cultivars can grow up to four meters in height, with a fast-growing, shallow root system and simultaneous reproductive and vegetative development [4]. In recent years, the tree tomato has caught the attention of growers and the industry due to its attractive, fleshy, edible fruits, which can be consumed either in salads or as a dessert fruit, or processed for making jams, yogurts, juices, or alcoholic beverages, among others [5]. It has developed from being a neglected crop, with a local interest in subsistence farms [6], into a promising fruit crop, having been introduced in several countries of Oceania, Southeast Asia, Europe and Africa [7]. Aside from South American countries, New Zealand is the largest producer and exporter of the tree tomato, where the marketable word, “tamarillo”, was coined from the Maori term “tama”, meaning leadership, combined with the Spanish word, “Amarillo”, meaning yellow, or the word, “Tomatillo”, meaning small tomato [8].
The interest in the tree tomato also lies in the high amounts of antioxidants, vitamins and carotenoids present in the fruit. The standard servings of tree tomato provide 67–75% of the recommended dietary intake (RDI) of ascorbic acid, 16–23% RDI of α-tocopherol and 9–20% RDI of β-carotene [8]. However, the phytochemical profile of the tree tomato varies among cultivars and environmental conditions [8,9]. The main cultivar groups (orange, orange-pointed, purple, red, and red conical) are differentiated by the fruit colour and shape, with different ranges of morphological and genetic variation among them [6,10]. Despite the great potential of tree tomato as a new major fruit crop, there are no high-throughput genetic or genomic studies conducted for this species. Recent advances in RNA next-generation sequencing (RNA-seq) and bioinformatics resources facilitate transcriptomic studies, even for non-model plant species where reference genomes are not available [11,12]. In fact, RNA-Seq is successfully and increasingly performed to decipher the plant transcriptome of neglected plant species [13]. Nevertheless, RNA sequencing offers many other interesting features such as the evaluation of gene expression, polymorphism discovery, small RNA profiling, phylogenomics, and splice variant discovery, among others [14].
In this study, we performed the transcriptome sequencing and assembly of two tree tomato accessions with different fruit colors (purple and orange) followed by their comprehensive structural and functional annotation. In addition, intraspecific polymorphisms between the two cultivars and interspecific ones with tomato and potato were identified. The transcriptomes and the information generated in the present study will be a useful resource for further genomic and molecular studies and will be a key genomic tool in assisting tree tomato breeding programmes.

The study was carried out in 2019 at the the Universitat Politècnica de València (UPV). A purple-fruited tree tomato accession (A21, with purple epicarp and mean fruit weight of 108.8 g) and an orange-fruited tree tomato accession (A23, with orange epicarp a mean fruit weight of 75.1 g) [6] (Figure 1), obtained from the UPV germplasm bank, were used for the present study. Seeds from each accession were germinated following the protocol of Ranil et al. (2015) [15]. Subsequently, the plants were grown in a greenhouse at UPV, Spain (GPS coordinates: latitude, 39°28′55″ N; longitude, 0°20′11″ W; 7 m above sea level). From each accession, tissues were sampled from several young leaves and flower buds and pools were made for each tissue and accession. Unfortunately, the two accessions did not set fruit under greenhouse conditions at our latitude, and thus fruit tissues were not used for the transcriptome assembly. All samples collected were immediately frozen in liquid nitrogen and stored at −80 °C for later use.

Total RNA was isolated from each tissue using the Mini spin kit (Macherey-Nage, Dueren, Germany). RNA integrity was determined by 1.0% (w/v) agarose gel electrophoresis and RNA quantification was performed by Qubit 2.0 Fluorometer (Thermo Fisher Scientific, Waltham, MA, USA). From each accession, tissues were sampled from several young leaves and flower buds and pools were made for each tissue and accession. A total of 2 μg of RNA for each pool was sent to Novogene (Cambridge, UK) for library preparation and sequencing. The cDNA paired-end libraries of 150 bp (250~300 bp insert size) libraries were constructed according to Illumina’s instructions. The mRNA of each sample was purified from the total RNA by using Sera-mag Magnetic Oligo (dT), then fragmented into short fragments using the fragmentation buffer. Using these fragments as templates, the first strand of cDNA was synthesized. The second strand of cDNA was synthesized using the buffer containing dNTPs, RNase H, and DNA polymerase I. Short fragments (200 ± 20 bp) were connected to the sequencing adapters and suitable fragments were excised from an agarose gel using a gel extraction kit. Then, the library was sequenced using the Illumina Hiseq-2000 sequencer. The raw reads data are available at NCBI Sequence Read Archive (SRA) with accession number SRR15258852 (A21) and SRR15258851 (A23), within the bioproject number PRJNA749599, available at https://www.ncbi.nlm.nih.gov/bioproject/PRJNA749599 http://www.ncbi.nlm.nih.gov.

The quality of reads was assessed using FastQC v0.11.8 [16]. The adapter sequences, low-quality reads (Phred score <30) and reads with an average length of less than 135 bp were trimmed using Trimmomatic v0.36 [17]. The two accessions were assembled separately using Trinity software v2.10 [18] with a default k-mer size of 25. Identical or near-identical contigs were clustered into a single contig by CD-HIT-EST tool v 4.8.1 [19] with an identity of more than 80%. The quality and completeness of the assemblies were first evaluated with Bowtie2 v2.3.2 [20] for assessing the number of paired-end reads that were present in the assembled transcripts, then the Ex90N50 transcript contig length (the contig N50 value based on the set of transcripts representing 90% of the expression data) was computed using contig ExN50 statistic.pl script bundled with Trinity. Finally, the completeness of the assemblies was evaluated using BUSCO v4.1.1 [21,22] using a set of eukaryotic genes as a database (https://busco-data.ezlab.org/v5/data/lineages/eukaryota_odb10.2020-09-10.tar.gz) (accessed on 10 August 2020).

For the intraspecific SNVs, clean reads of each accession were mapped separately to the A23 assembled transcriptome which acted as a reference using BWA v0.7.17 [29], while for interspecific SNVs the reads were mapped against the reference genome of tomato (Heinz 1706 version SL4.0) [30] and potato (DM 1-3 516 R44 v6.1) [31]. Subsequently, SAMtools v1.10 [32] was used to convert SAM to BAM format while duplicate reads were removed from respective alignment sequences using Picard-tools v2.23.8 (http://picard.sourceforge.net) (accessed on 20 January 2021). Variants were called by FreeBayes v1.3.4 [33] to identify intra- and interspecific polymorphisms that were filtered using VcfFilter v0.2 (https://github.com/biopet/vcffilter) (accessed on 20 January 2021) based on a minQualScore of 30, minTotalDepth of 40 and a minSampleDepth of 20. Finally, the variant impact effects were predicted using SnpEff v5.0 [34].

3.4. Identification and Characterizacion of SNVs

In this work, we assembled high-quality transcriptome sequences of two tree tomato cultivars, a fruit crop closely related to tomato and potato, with great potential in subtropical regions. The comprehensive annotation provided extensive and detailed information that facilitates the dissection of traits of agronomic interest, such as the content in bioactive compounds or the response to stresses, among others. In addition, this is the first study in tree tomato where a high number of polymorphisms have been identified, both intraspecifically and with closely related species that could be used in genetic diversity analysis, qualitative and quantitative trait mapping, and breeding programs in tree tomato. This information constitutes a valuable resource for tree tomato breeding programs and genetic diversity studies and will help in the enhancement of tree tomato and its successful introduction in other regions and countries.

The following are available online at https://www.mdpi.com/article/10.3390/horticulturae7110431/s1’, Table S1: GO enrichment analysis in A21 and A23, Table S2: Identification of regulatory genes of the carotenoid biosynthetic pathway in A21 and A23 from Solanum lycopersicum and Arabidopsis thaliana, Table S3: Number of transitions/transversions, variant rate, and homozygous and heterozygous variants, Table S4: Number of predicted effects by impact, Table S5: Percentage of effects by region and functional class.

The raw reads data are available at NCBI Sequence Read Archive (SRA) with accession number SRR15258852 (A21) and SRR15258851 (A23), within the bioproject number PRJNA749599, available at http://www.ncbi.nlm.nih.gov. VCF files are available upon request from the corresponding author. 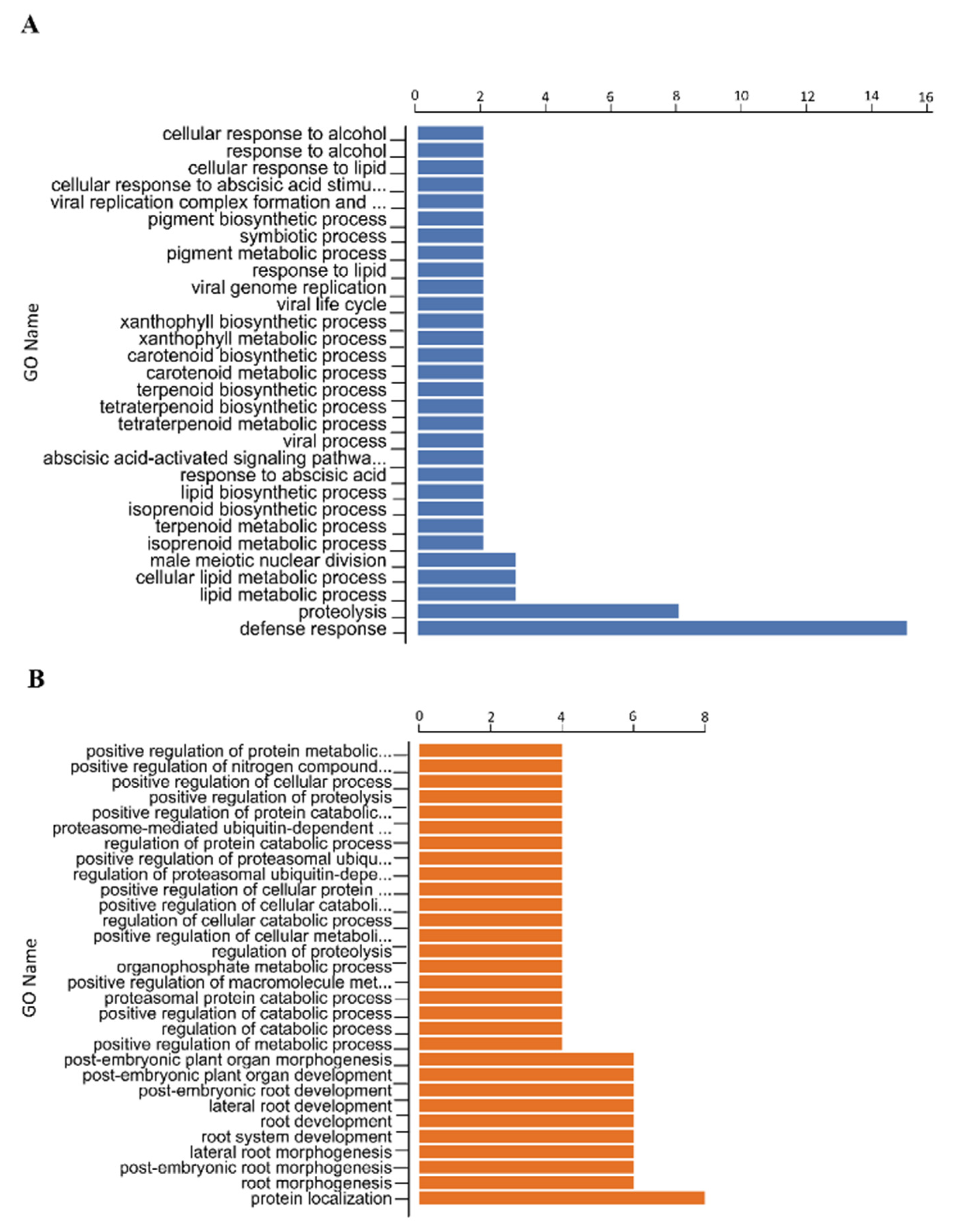 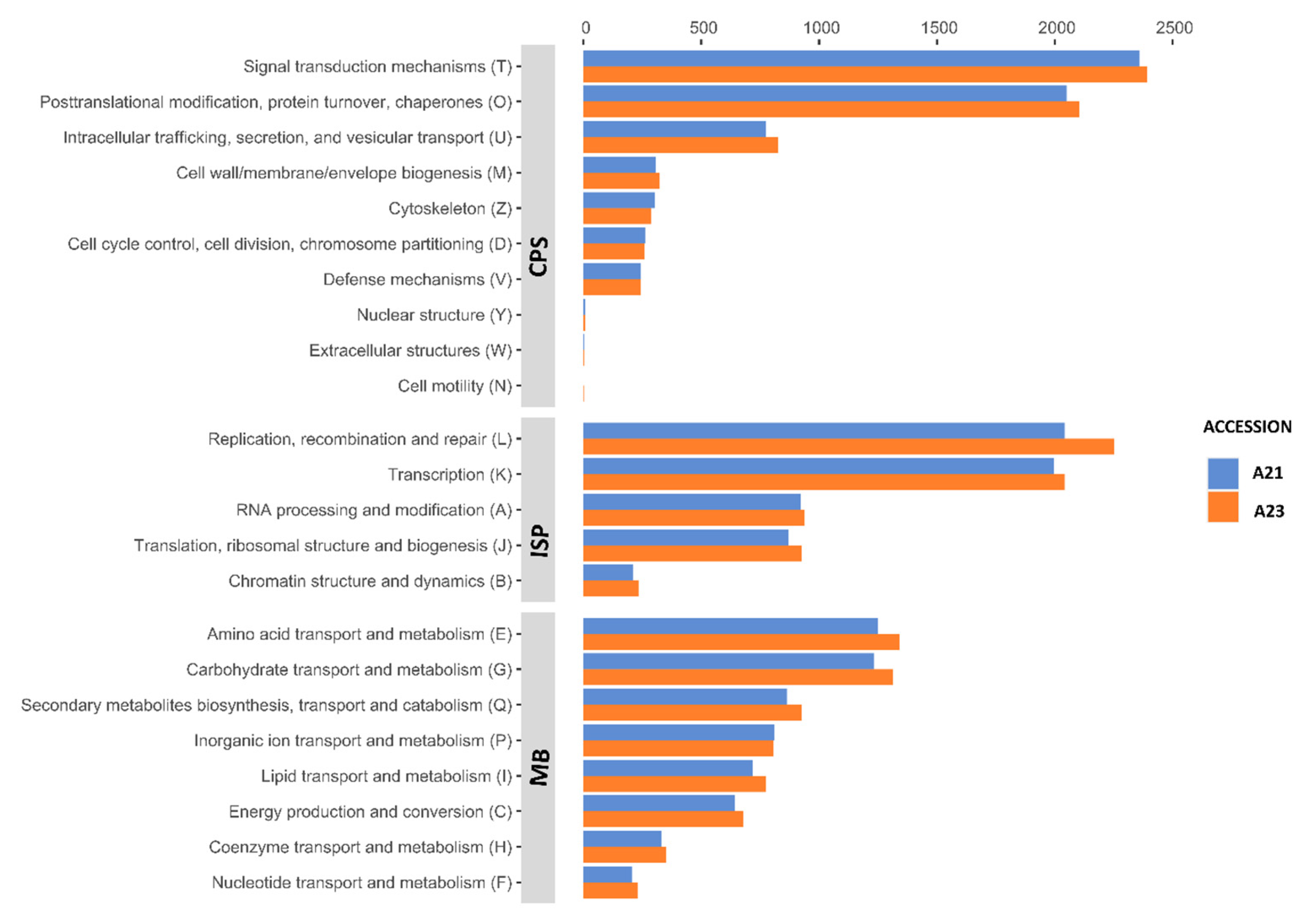