The Tuscan Region has a vast repertoire of ancient plants that have been recovered across the territory over the years. These plants thrive in an environment characterized by minimal human intervention and are thus the result of the process of adaptation to the territory of origin. In this work, we focused on the quantification of bioactive compounds in ancient tomato varieties. More specifically, we quantified polyphenols, flavonoids, carotenoids, and vitamin C in eight local Tuscan tomato varieties and found higher contents with respect to those in commercial tomatoes Polyphenol and antioxidant compounds in ancient varieties reported a two- and, in some instances, three-fold increase in concentration, compared to the commercial counterparts. Interestingly, the data relative to the carotenoids did not show any significant differences when comparing the ancient varieties with the commercial ones, a finding confirming the market selection criterion based on color. On a longer-term perspective, this study aims at drawing attention to the importance of preserving autochthonous natural plant biodiversity and towards promoting research on local varieties. We believe that this study will pave the way to the valorization of local plant biodiversity and promote an extended use of products in the nutraceutical sector derived from vegetables. View Full-Text
Keywords: local crops; nutraceuticals; agricultural biodiversity; anti-oxidants local crops; nutraceuticals; agricultural biodiversity; anti-oxidants
►▼ Show Figures 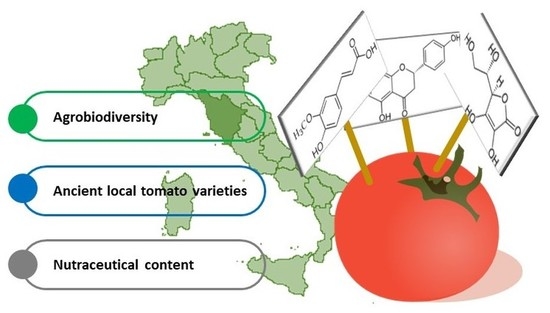