Mechanical Cell Disruption Technologies for the Extraction of Dyes and Pigments from Microorganisms: A Review
Previous Article in Journal

Red grape Nero d’Avola cultivar grape pomace powder (GPP) was applied during fresh ovine cheese production in order to increase polyphenol content. Before cheeses were produced, the bacteria of a freeze-dried commercial starter culture were isolated and tested in vitro against GPP. Two dominant strains, both resistant to GPP, were identified. Thestarter culture was inoculated in pasteurized ewe’s milk and the curd was divided into two bulks, one added with 1% (w/w) GPP and another one GPP-free. GPP did not influence the starter culture development, since lactic acid bacteria (LAB) counts were 109 CFU/g in both cheeses at 30 d. To exclude the interference of indigenous LAB, the pasteurized milk was analyzed, and several colonies of presumptive LAB were isolated, purified and typed. Four strains were allotted into Enterococcus and Lacticaseibacillus genera. The direct comparison of the polymorphic profiles of cheese bacteria evidenced the dominance of the starter culture over milk LAB. The addition of GPP increased cheese total phenolic compounds by 0.42 g GAE/kg. Sensory evaluation indicated that GPP-enriched cheese was well appreciated by the judges, providing evidence that GPP is a suitable substrate to increase the availability of total phenolic content in fresh ovine cheese. View Full-Text
Keywords: grape pomace powder; commercial starter culture; ovine cheese; industrial application; total phenolic content grape pomace powder; commercial starter culture; ovine cheese; industrial application; total phenolic content
►▼ Show Figures 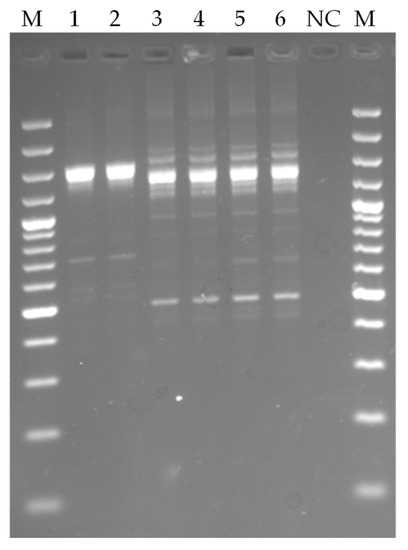