Lachancea thermotolerans, the Non-Saccharomyces Yeast that Reduces the Volatile Acidity of Wines

The objectives of this paper were to summarize the status of the livestock (pig and cattle) industry and its waste management in Taiwan. The Water Pollution Control Act authorized the reuse of liquor and digestate from anaerobic digestion (AD) as fertilizers for agricultural lands on 24 November 2015. A large number of official databases and literature have been surveyed and analyzed to address the characterization of the biogas (AD-based) digestate and the potential benefits of biogas-to-power in Taiwan. On the promulgation of the Act, the central ministries have jointly managed the applications of livestock farms for reusing the AD-based liquor and digestate as fertilizers for farmlands. The survey findings revealed that the biogas digestate from a pig farm in Taiwan contained significant amounts of nitrogen, phosphorus, and other soil nutrients such as calcium and magnesium. However, it is necessary to control zinc present in the biogas digestate from pig-raising farms. A preliminary analysis based on 123 large-scale pig farms with a total of 1,223,674 heads showed the annual benefits of methane reduction of 6.1 Gg, electricity generation of 3.7 × 107 kW-h, equivalent electricity charge saving of 4.0 × 106 US$, and equivalent carbon dioxide mitigation of 152.5 thousand tons (Gg). Obviously, the integration of AD and biogas-to-power for treating animal manure is a win-win option for livestock farms to gain environmental, energy, and economic benefits. View Full-Text
Keywords: digestate; anaerobic digestion; biogas-to-power; agricultural fertilizer; regulatory promotion; circular economy digestate; anaerobic digestion; biogas-to-power; agricultural fertilizer; regulatory promotion; circular economy
►▼ Show Figures 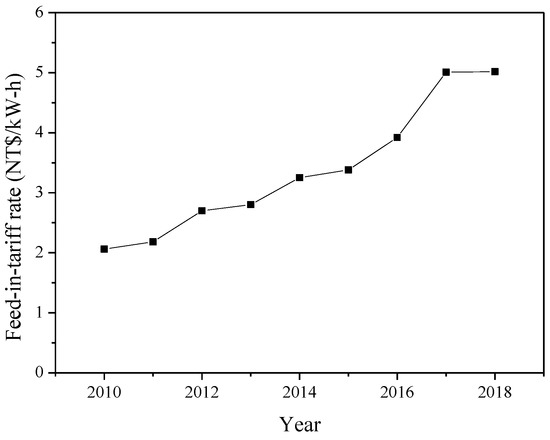