Acetic acid is undesired in Icewine. It is unclear whether its production by fermenting yeast is linked to the nicotinamide adenine dinucleotide (NAD+/NADH) system or the nicotinamide adenine dinucleotide phosphate (NADP+/NADPH) system. To answer this question, the redox status of yeast cytosolic NAD(H) and NADP(H) were analyzed along with yeast metabolites to determine how redox status differs under Icewine versus table wine fermentation. Icewine juice and dilute Icewine juice were inoculated with commercial wine yeast Saccharomyces cerevisiae K1-V1116. Acetic acid was 14.3-fold higher in Icewine fermentation than the dilute juice condition. The ratio of NAD+ to total NAD(H) was 24-fold higher in cells in Icewine fermentation than the ratio from the dilute juice condition. Conversely, the ratio of NADP+ to total NADP(H) from the dilute fermentation was 2.9-fold higher than that in the Icewine condition. These results support the hypothesis that in Icewine, increased NAD+ triggered the catalysis of NAD+-dependent aldehyde dehydrogenase(s) (Aldp(s)), which led to the elevated level of acetic acid in Icewine, whereas, in the dilute condition, NADP+ triggered NADP+-dependent Aldp(s), resulting in a lower level of acetic acid. This work, for the first time, analyzed the yeast cytosolic redox status and its correlation to acetic acid production, providing a more comprehensive understanding of the mechanism of acetic acid production in Icewine. View Full-Text
Keywords: Icewine; Saccharomyces cerevisiae; hyperosmotic stress; redox status; NAD(H); NADP(H); acetic acid; aldehyde dehydrogenase Icewine; Saccharomyces cerevisiae; hyperosmotic stress; redox status; NAD(H); NADP(H); acetic acid; aldehyde dehydrogenase
►▼ Show Figures 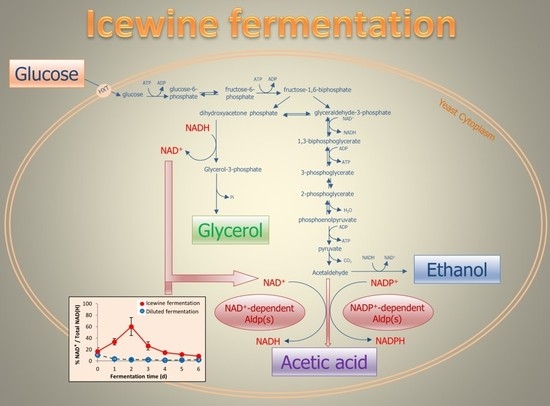