Previous winery-based studies showed the strains Lalvin® RC212 (RC212) and Lalvin® ICV-D254 (D254), when present together during fermentation, contributed to >80% relative abundance of the Saccharomyces cerevisiae population in inoculated and spontaneous fermentations. In these studies, D254 appeared to out-compete RC212, even when RC212 was used as the inoculant. In the present study, under controlled conditions, we tested the hypotheses that D254 would out-compete RC212 during fermentation and have a greater impact on key fermentation-derived chemicals. The experiment consisted of four fermentation treatments, each conducted in triplicate: a pure culture control of RC212; a pure culture control of D254; a 1:1 co-inoculation ratio of RC212:D254; and a 4:1 co-inoculation ratio of RC212:D254. Strain abundance was monitored at four stages. Inoculation ratios remained the same throughout fermentation, indicating an absence of competitive exclusion by either strain. The chemical profile of the 1:1 treatment closely resembled pure D254 fermentations, suggesting D254, under laboratory conditions, had a greater influence on the selected sensory compounds than did RC212. Nevertheless, the chemical profile of the 4:1 treatment, in which RC212 dominated, resembled that of pure RC212 fermentations. Our results support the idea that co-inoculation of strains creates a new chemical profile not seen in the pure cultures. These findings may have implications for winemakers looking to control wine aroma and flavor profiles through strain selection. View Full-Text
Keywords: Saccharomyces cerevisiae; strain interaction; fermentation-derived compounds Saccharomyces cerevisiae; strain interaction; fermentation-derived compounds
►▼ Show Figures 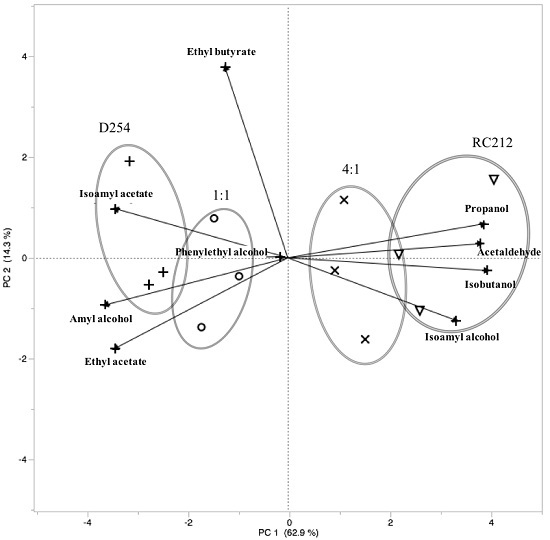