Over the past few years, there has been increasing widespread interest in long non-coding RNAs (lncRNAs). LncRNAs are non-protein coding transcripts greater than 200 nucleotides in length and lacking in significant open reading frames [1]. These transcripts with their complex gene architecture have attracted the significant attention of researchers due to their recently discovered role in the development of some human diseases [2] as regulators of transcriptional and post-transcriptional gene expression [3]. It is estimated that the number of lncRNAs in the human genome is in the tens of thousands [4]. In addition, for the majority of these transcripts, their biological roles and molecular functions still remain unknown.
However, for some lncRNAs, their functions have been determined as involving inhibition of microRNAs (miRNAs), epigenetic regulation, chromatin state modification and chromosomal interactions, transport of proteins, and, finally, modulation of the activity or abundance of proteins or messenger RNAs (mRNAs) with which they interact [5].
Taurine upregulated 1 gene (TUG1) is a 7.1 kb lncRNA transcribed from human chromosome 22q12.2 [6]. Accumulating evidence shows that TUG1 plays an important role in several types of cancer [7].
Recently, Li et al. [8] detected hyperexpression of TUG1 in 100 samples of cancerous breast tissue and associated it to breast cancer malignancy features such as tumor size and distant metastasis. Additionally, TUG1 was associated to Ki-67 and human epidermal growth factor receptor 2 (ERBB2/HER2). Although this study evidenced the potential role of TUG1 in breast cancer, they failed to examine TUG1 expression in different subtypes, possibly due to the small number of samples analyzed [8].
Breast cancer is a heterogeneous disease at both the morphological and molecular level. Based on molecular signature Prediction Analysis on Microarrays that uses a minimal gene set (PAM50), there are five main subtypes of breast cancer: basal-like, HER2-enriched, luminal A, luminal B, and normal-like. These subtypes have specific biological features, epidemiology, and prognostic implications, and are useful in guiding patient treatment [9,10].
In the present study, we include analysis of TUG1 expression in 796 invasive breast carcinoma samples and 105 normal samples of RNA sequencing (RNA-seq) datasets from The Cancer Genome Atlas (TCGA), and describe that TUG1 expression is increased in HER2-enriched and basal-like subtypes compared to luminal A. Additionally, TUG1 expression is associated with overall survival in HER2-enriched patients. These results reinforce the importance of TUG1 in breast cancer and evidence its potential impact on specific subtypes.

2.1. TUG1 Expression Is Increased in HER2-Enriched and Basal-Like Compared to Luminal A

The transcript level of TUG1 in breast cancer tissues was not differentially expressed when compared to adjacent non-cancerous tissue when all samples were considered (p = 0.18) nor in paired comparison analysis (p = 0.12).
Related to subtype PAM50 classification, TUG1 was found to be hypoexpressed in patients classified as having the luminal A subtype when compared to HER2-enriched and basal-like subtypes (p < 0.001) (Figure 1). In breast cancer cell lines, although TUG1 expression profile were similar to that seen in patients, the difference was not significant (p = 0.39) (Figure A1).
High TUG1 expression was also associated with positive HER2 and negative status for estrogen and progesterone receptors (ER/PR) (p ≤ 0.001) (Figure 2). Association with the neoplasm disease stage was not found (p = 0.43) (data available at TANRIC platform)

2.2. TUG1 Has a Different Impact on Survival Depending on Molecular Subtype

Considering the differences in TUG1 in molecular subgroups, we investigated the prognostic significance of expression in each subtype. We found that decreased expression of TUG1 is associated with improved disease-free survival in HER2-enriched patients (the lowest 75% expression -P75, p = 0.02) but high expression of TUG1 is associated with increased disease-free survival in luminal B patients (the lowest 25% expression - P25, p = 0.005) (Figure 3), suggesting that the prognostic value of TUG1 could be different in specific subtypes.
The classification of mammary tumors by the TNM system is based on the main morphological attributes of malignant tumors, which are clinically and histopathologically determined. The parameters evaluated are: primary tumor extension (T), presence and extent of regional lymph node metastases (N), and the presence of distant metastases (M) [11,12]. For subtypes evidenced in univariate analysis of survival, multivariate Cox regression was performed. Age at initial pathologic diagnosis, tumor size (T1 to T4), involvement of lymph nodes (N0 to N3), and presence of metastatic disease (M0 or M1) were considered as covariates, along with TUG1 expression. In luminal B samples (Table 1), all the covariates tested failed to show significance. However, in HER2-enriched samples (Table 2), the analysis concluded that TUG1 expression, age at initial pathologic diagnosis, and positive metastasis are associated with prognosis.

Information from 796 invasive breast carcinoma and 105 non-neoplastic cancer-adjacent breast tissues was collected. All RNA-seq data and clinical information is available in the TCGA database following ethics, laws, and policies from the program. Clinicopathological characteristics of the studied population is presented in Table 3.
Clinical guidelines for determining estrogen receptor (ER), progesterone receptor (PR), and human epidermal growth factor receptor 2 (ERBB2/HER2) status for breast cancers have been established in TCGA samples. According to the current clinical guidelines jointly issued by the American Society of Clinical Oncology (ASCO) and the College of American Pathology (CAP), in use since January 2010, a breast tumor is considered ER- and PR-positive if the immunohistochemistry (IHC) value of the corresponding nuclear staining is ≥1%. Before 2010 there was no universal standard for ER and PR status, so local hospitals used their own thresholds for their clinical practices. Considering that the year of diagnosis of all breast cancer cases collected in this study ranged from 1988 to 2011, determining the clinical status for ER and PR followed a mixture of thresholds. For HER2, following the current ASCO/CAP guideline, a breast tumor with IHC values of 0 or 1+ is called “Negative”, level 2+ is “Equivocal”, and level 3+ is “Positive”. The equivocal cases are then analyzed by Fluorescence In Situ Hybridization (FISH), where a case is called “Positive” if the FISH ratio is ≥2.2, and “Negative” if the FISH ratio is ≤1.8 [26]. Subtype stratification was based on the identification of gene expression by the 50-gene PAM50 predictor [27].
Large-scale RNA-seq datasets from The Cancer Genome Atlas (TCGA) were assessed and analyzed by the open-access web resource “The Atlas of Noncoding RNAs in Cancer” (TANRIC) [28]
On the TANRIC website, RNA-seq datasets for breast cancer cell lines are also available. We included TUG1 expression information from 25 cell lines, classified as luminal A (n = 6), luminal B (n = 4), HER2-enriched (n = 4), or basal (n = 11) subtypes [29,30].
Analysis of variance (ANOVA) with post-hoc Tukey testing was used to examine TUG1 expression across tumor subtypes and disease stages. Student’s t-test assessed statistical differences between positive and negative ER, PR, and HER2 status. The homogeneity among the variances was tested by Bartlett’s test. More details of the algorithm for expression quantification and statistics are better described by Li et al. [28].
For survival analysis, patients were stratified into values below and above the median and the quartiles (P25 and P75). The Kaplan-Meier curves and log rank tests were used to estimate overall survival, which was calculated to the last follow-up, or death event. Additionally, multivariate Cox proportional hazards regression analysis included TUG1 expression, age, tumor size, involvement of lymph nodes, and presence of metastatic disease, with calculation of the hazard ratio (HR) and 95% confidence interval (95% CI).
Data were analysed statistically using the Statistical Package for the Social Sciences (SPSS) software for Windows, version 15.0 (SPSS Inc., Chicago, IL, USA). Cox proportional hazards regression analysis was performed using the R package [31].

We thank Clarice Groeneveld for her helpful suggestions for the statistical analysis. This collaborative study was supported by the Public Research Agencies CAPES and CNPq. 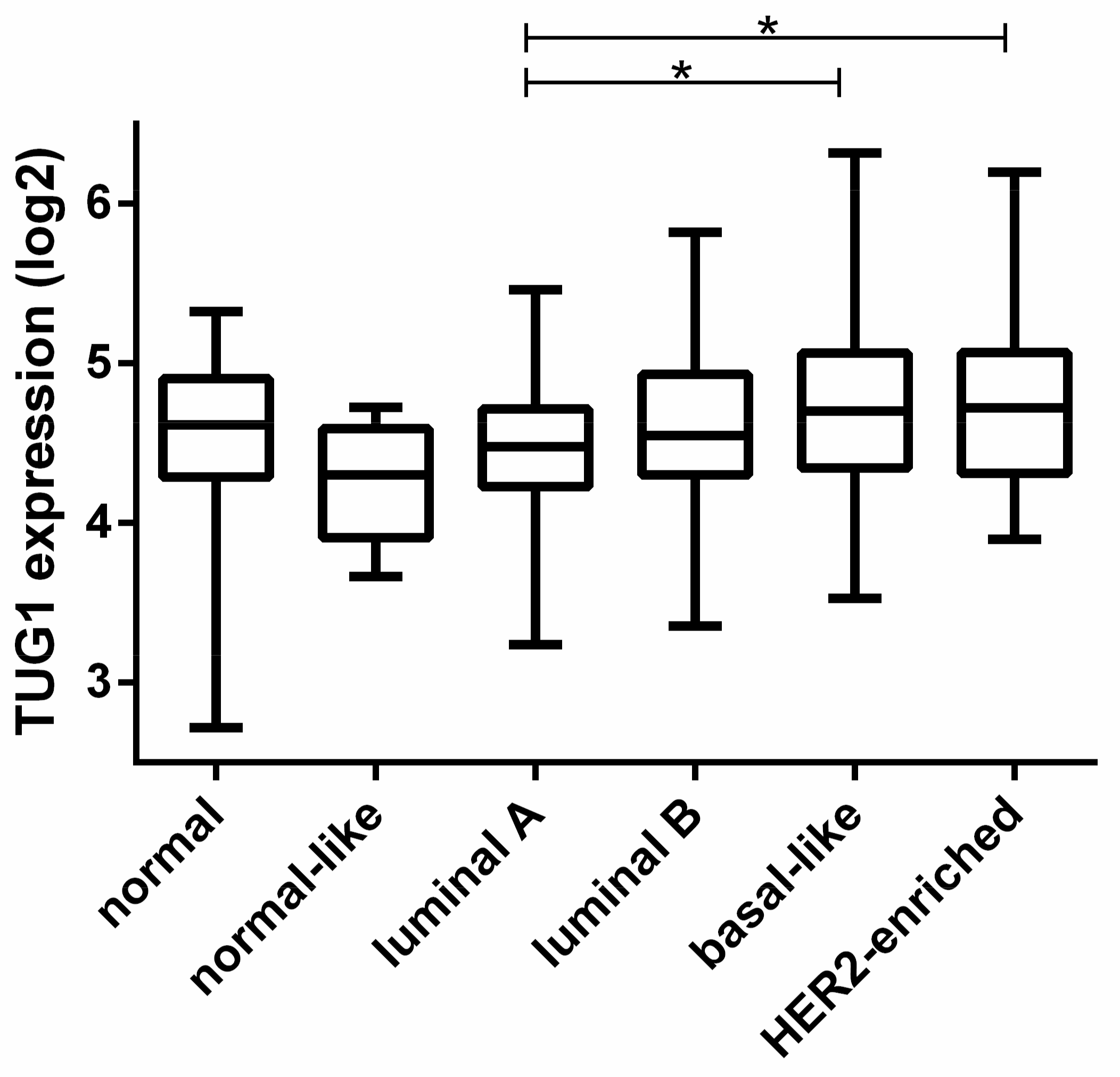 Table 3. Clinicopatholigical Features.
Table 3. Clinicopatholigical Features.
Patient information from TCGA. Data only for those with TUG1 expression and clinical data available (n = 796).
We use cookies on our website to ensure you get the best experience. Read more about our cookies here.
Accept
We have just recently launched a new version of our website. Help us to further improve by taking part in this short 5 minute survey here. here.
Never show this again