Onset of Convection in the Presence of a Precipitation Reaction in a Porous Medium: A Comparison of Linear Stability and Numerical Approaches
Next Article in Special Issue

On the Applicability of Linear, Axisymmetric Dynamics in Intensifying and Mature Tropical Cyclones

The applicability of linearized axisymmetric dynamics to the intensification and structure change of tropical cyclones is investigated. The study is motivated by recent work that presented axisymmetric solutions to the linearized, non-hydrostatic, vortex-anelastic equations of motion (the so-called 3DVPAS model). The work called into question the importance of a recently proposed nonlinear, system-scale boundary-layer spinup mechanism both in intensifying storms and in mature storms undergoing secondary eyewall formation. The issue is examined using a three-dimensional mesoscale simulation of an intensifying tropical cyclone, alongside the linear 3DVPAS model. Solutions to the linear model, for imposed eddy forcing terms derived from the mesoscale simulation, are shown to be valid only for short times ( h) in the inner-core region of the vortex. At later times, the neglected nonlinear terms become significant and the linear results invalid. It follows that the linear results cannot be used to describe all aspects of the tropical cyclone dynamics at later times. In particular, they cannot be used (a) to dismiss the importance of the nonlinear boundary-layer spinup mechanism, nor (b) to isolate the separate effects of diabatic heating from those of friction, within the nonlinear boundary layer at least. Such separation depends on the linear superposition principle, which fails whenever nonlinearity is important. Similar caveats apply to the use of another linear model, the traditional Sawyer–Eliassen balance model. Its applicability is limited not only by linearity, but also by its assumption of strictly balanced motion. Both are incompatible with nonlinear spinup. View Full-Text
Keywords: tropical cyclone; hurricane; typhoon; intensification; eddy dynamics; conventional and nonlinear boundary layer spinup mechanisms tropical cyclone; hurricane; typhoon; intensification; eddy dynamics; conventional and nonlinear boundary layer spinup mechanisms
►▼ Show Figures 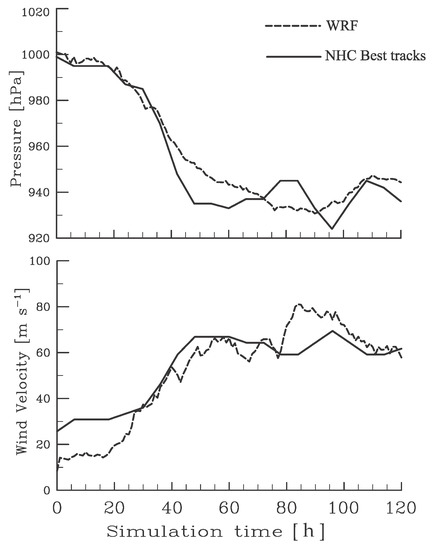