Doxycycline and Monocaprin In Situ Hydrogel: Effect on Stability, Mucoadhesion and Texture Analysis and In Vitro Release

The aim of this study was to develop a stable aqueous formulation containing a combination of doxycycline and monocaprin in clinically relevant concentrations. Increase in expression of Matrix metalloproteinases (MMPs) and microbial role in oral diseases is well established and the combination of above active ingredients could be potentially beneficial in treatment of oral mucosal conditions. The hydrogels containing different concentrations of doxycycline and monocaprin in the presence and absence of stabilizing excipients were developed and their stabilities were studied at 4 °C for up to 1 year. The drug–drug interaction was evaluated using Fourier-transform infrared spectroscopy (FTIR). The addition of monocaprin on doxycycline in situ hydrogel’s mucoadhesiveness, texture properties and drug release mechanism was studied. The addition of monocaprin negatively affected the doxycycline stability and was concentration dependent, whereas monocaprin was stable up to 1 year. Doxycycline did not interfere with the anti-Candidal activity of monocaprin. Furthermore, the presence of monocaprin significantly affected the formulation hardness, compressibility and adhesiveness. Monocaprin and doxycycline release followed zero order kinetics and the release mechanism was, by anomalous (non-Fickian) diffusion. The addition of monocaprin increased the drug release time and altered the release mechanism. It is possible to stabilize doxycycline in the presence of monocaprin up to 1 year at 4 °C. View Full-Text
Keywords: doxycycline; monocaprin; stability; oral mucosa; drug delivery; MMP doxycycline; monocaprin; stability; oral mucosa; drug delivery; MMP
►▼ Show Figures 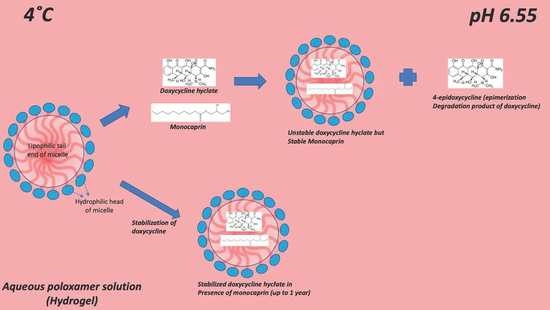