Hydrogels Based on Dynamic Covalent and Non Covalent Bonds: A Chemistry Perspective

2.1. Gel Synthesis by Copolymerization and Co-crosslinking

In order to clarify the effect of monomer sequence along network chains on swelling behavior of gels, copolymerization and co-crosslinking gels were prepared in various combinations using three kinds of monomers, as shown in Figure 2. These monomers give polymers with different affinity to water; hydrophilic N,N-dimethylacrylamide (DMAAm), hydrophobic N-n-butylacrylamide (NBAAm), and thermoresponsive NIPAAm.
Copolymerization gels were synthesized via radical copolymerization of two kinds of the acrylamide derivatives in the presence of the divinyl crosslinker, N,N’-methylenebisacrylamide (BIS), with various monomer feed ratios. The copolymerization gels were supposed to possess a random monomer sequence in the network chains because the structural similarity of the monomers gives the same polymerization reactivity. The reaction was conducted in methanol as solvent due to cosolvency, and the reaction time was set for 24 h, which was supposed to be long enough for the completion of the polymerization. Therefore, we could regard the feed ratio as the composition of the copolymerization gels. After the completion of gelation, methanol in the gel was replaced by pure water by means of immersion of the gels into large amounts of water for several days.
Co-crosslinking gels were obtained by a crosslinking reaction of two kinds of prepolymers containing activated ester groups, which react efficiently with primary amines [36]. The co-crosslinking gels are supposed to have a blocky network sequence because of the synthetic procedure using two kinds of polymers. The prepolymers were prepared by radical copolymerization of each acrylamide derivative monomer with the monomer carrying activated ester, N-(acryloyloxy)succinimide (NHSA). The obtained polymers were characterized by size-exclusion chromatography (SEC) and 1H NMR analyses. The charactirization clarified that all the prepolymers had similar molecular weight and NHSA content as shown in Table 1. Then, the two kinds of prepolymers were dissolved in N,N-dimethylformamide (DMF), which is a good solvent for all the prepolymers, at various ratios to change the composition of the gels, and were then reacted with ethylenediamine (EDA) as crosslinker. After the completion of gelation, DMF in the gel was replaced by pure water in the same process used for the copolymerization gels. Herein, it should be noted that the copolymerization gels and the co-crosslinking gels were prepared at the same feed concentration of monomer unit and crosslinker, which gave almost the same crosslinking density under the assumption that all monomers and crosslinkers were completely consumed.

We evaluated the effect of monomer sequence along the network chain of polymer gels on the swelling behavior by utilizing two gel synthetic methods: copolymerization and co-crosslinking. We clearly demonstrated that the copolymerization gels and the co-crosslinking gels showed different swelling behavior even with the same monomer composition in a series of monomer combinations including hydrophilic/hydrophobic, thermoresponsive/hydrophobic, and thermoresponsive/hydrophilic acrylamide derivatives. Importantly, the copolymerization method afforded random monomer distribution to change the affinity of each network chain to water depending on monomer composition. On the other hand, the co-crosslinking method produced a blocky sequence derived from two kinds of prepolymers, which separately and independently contributed to the swelling properties such as the degree of swelling and transition temperature. Thus, we clarified the effect of monomer sequence along the network chain on the properties of polymer gels. These fundamental results are important for the design of polymer gel materials such as stimuli-responsive materials and biomedical devices in combination with plural monomers.

DMAAm was kindly provided by Kohjin Co., Ltd. (Tokyo, Japan), and it was purified by distillation before use. NBAAm was prepared by the reaction of acryloyl chloride with n-butylamine, and purified by distillation before use. NIPAAm (Wako, Osaka, Japan, 98%) was purified by recrystallization from toluene/n-hexane. NHSA was prepared as reported in literature [43]. BIS (Wako, 99%), EDA (Wako, 98%), azobisisobutyronitrile (AIBN; Wako, 98%), 1,2,3,4-tetrahydronaphthalene (tetralin; Aldrich, St. Louis, MI, USA, 99%), 1,4-dioxane (Wako, 99%), DMF (Wako, 99%), and methanol (Wako) were used as received.

A typical example of gel synthesis by copolymerization is given below. DMAAm (0.243 g), NBAAm (0.312 g), and BIS (52.5 mg) were all dissolved into methanol (7.0 mL). After addition of AIBN (63.9 mg), the solution was transferred into a test tube containing glass capillaries (volume: 40 μL, internal diameter: 1.3 mm) and bubbled with nitrogen for 10 min. The test tube was immersed in the water bath controlled at 55 °C and kept for 24 h for the completion of the gelation. Under these conditions, almost all of the monomers were consumed to become the gel, and the network polymer composition was considered to be equal to the monomer concentration ratio. Afterwards, the cylindrical gels were taken out from the capillaries and washed with distilled water by means of immersion for several days.

A typical example of gel synthesis by co-crosslinking is given below. DMAAm (1.95 mL), NHSA (169 mg), tetralin (0.50 mL), AIBN (32.8 mg), and 1,4-dioxane (7.5 mL) were added to a 50 mL round-bottomed flask equipped with a three-way stopcock and bubbled with nitrogen for 10 min. The flask was then placed in an oil bath kept at 60 °C for 70 min. The reaction was quenched by cooling down the reaction solution to −78 °C. Monomer conversion was determined from the concentration of residual monomer measured by 1H NMR with tetralin as an internal standard. Then, the reaction mixture was poured into diethyl ether to obtain the purified P(DMAAm/NHSA) prepolymers. The monomer composition of the polymers was determined by 1H NMR analysis. PNBAAm and PNIPAAm prepolymers were also prepared by the same procedures.
The obtained PDMAAm prepolymer [NHSA content: 7.7 mol% (calculated by 1H NMR)] (79.3 mg) and the PNBAAm prepolymer [NHSA content: 6.7 mol%] (95.4 mg) were dissolved into DMF (0.50 mL). To this polymer solution, 0.5 mL of EDA/DMF solution (amino groups were set to be equimolar amounts of NHSA units in the prepolymers) was added, and glass capillaries (volume: 40 μL, internal diameter: 1.3 mm) were added to the reaction vessel. The mixture was kept for 24 h to complete the crosslinking reaction. Then, the cylindrical gels were taken out from the capillaries and washed with distilled water by means of immersion for several days to remove the resultant N-hydroxysuccinimide, which was produced by the reaction with activated ester and diamine crosslinker.

Number-average molecular weight (Mn) and polydispersity index (Mw/Mn) of polymers were determined by size-exclusion chromatography (SEC) in DMF containing 10 mM LiBr at 40 °C using three polystyrene gel columns (PLgel 5 μm MIXED-C, PLgel 3 μm MIXED-E and Shodex KF-805L) that were connected to a Shimadzu LC-10AD precision pump (Kyoto, Japan) and a Shimadzu RID-10A refractive index detector (Kyoto, Japan). The columns were calibrated against standard poly(methyl methacrylate) samples (Agilent, Santa Clara, California, USA). 1H NMR spectra were recorded on a JEOL JNM-LA400 spectrometer (Akishima, Japan), operating at 399.65 MHz. The degree of swelling was determined by measurement of the diameter of the cylindrical gels. The gels were immersed in water at predetermined temperatures, and the equilibrium diameter at given temperature, d, was measured using a digital microscope (MOTICAM2000, Shimadzu, Kyoto, Japan). The degree of swelling was calculated by (d/d0)3; d0 is the inner diameter of the capillary used for the gel preparation. The shrinking rate was evaluated by temperature-jump experiment. The cylindrical gels were immersed in water at 5 °C until the gels reached to the equilibrium swollen state. Then, the gels were quickly transferred into the hot water at 50 °C, and the change of the diameter of the gel was observed.

This work was partially supported by the Japan Society for the Promotion of the Science through a Grant-in-aid for Scientific Research (C) No. 24550259, for which the authors are grateful. 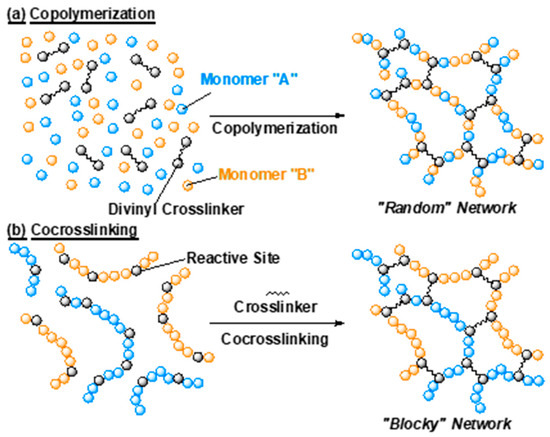 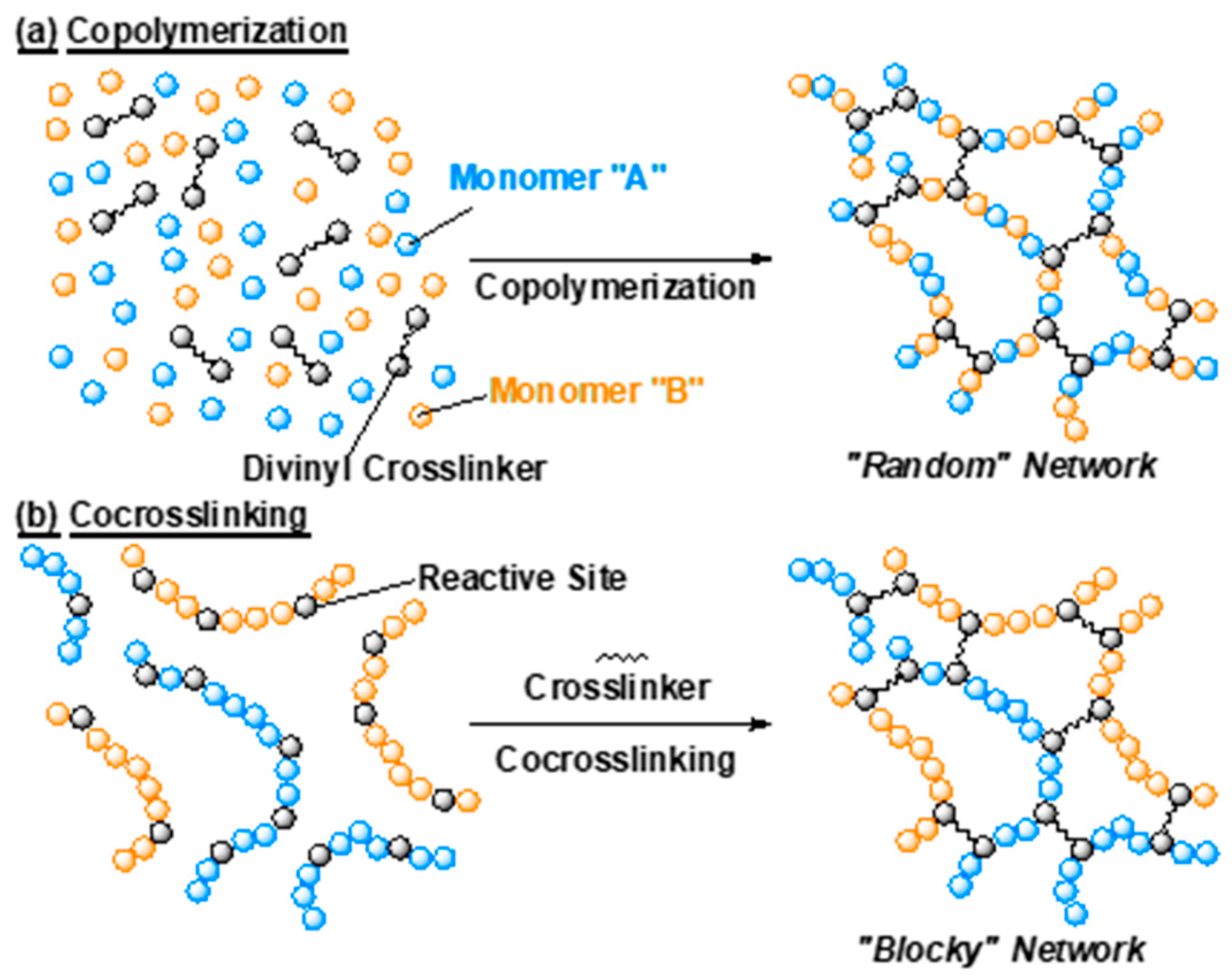 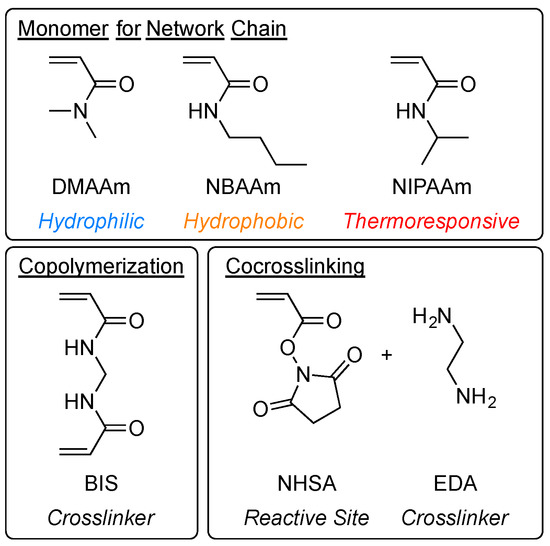 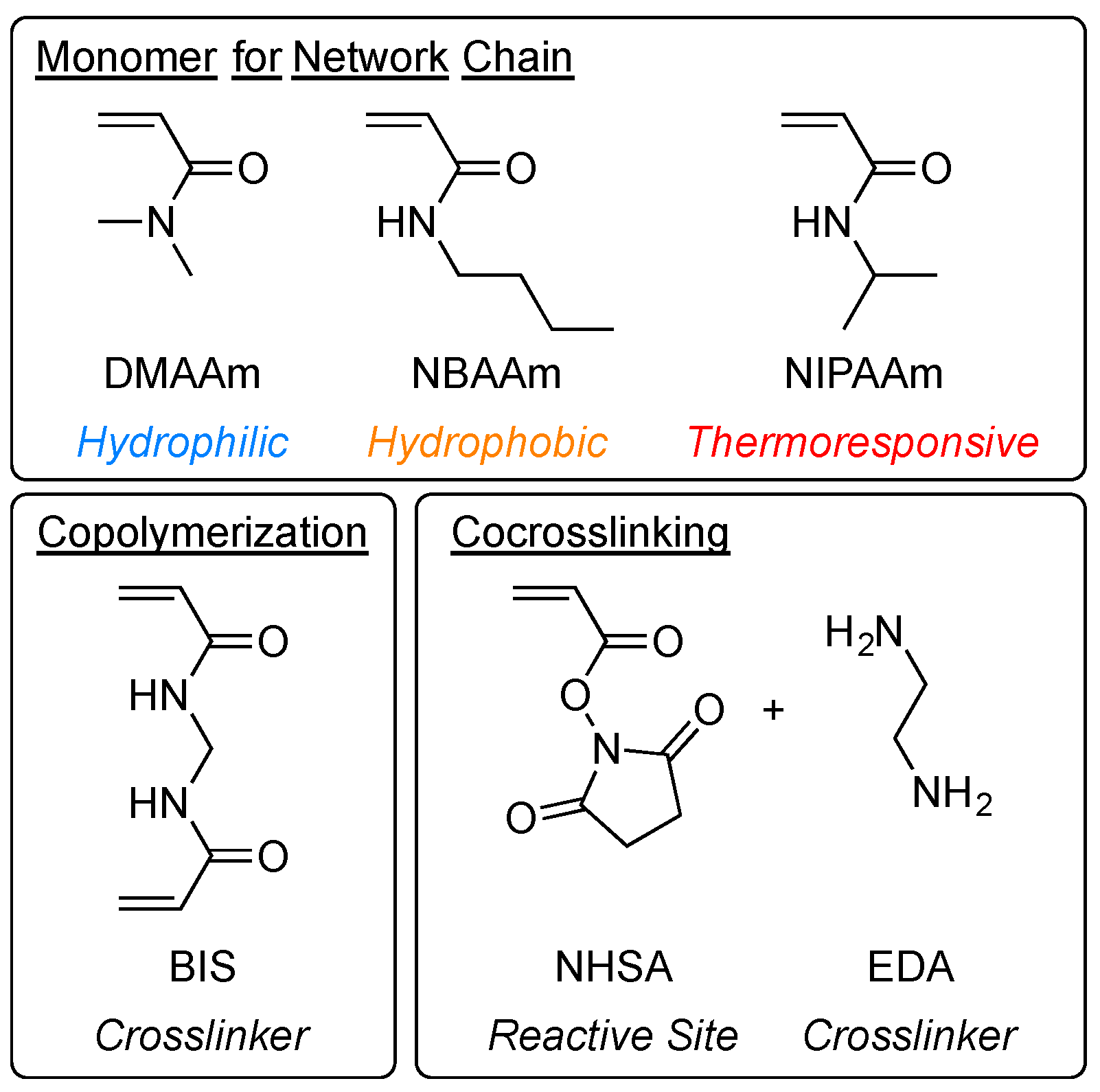 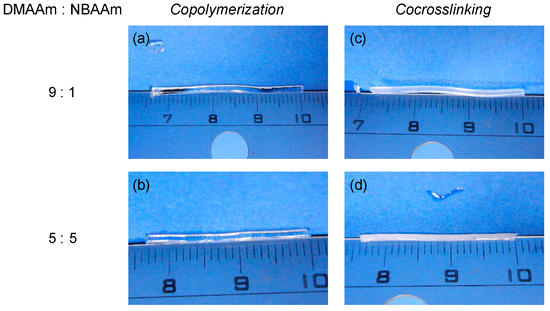 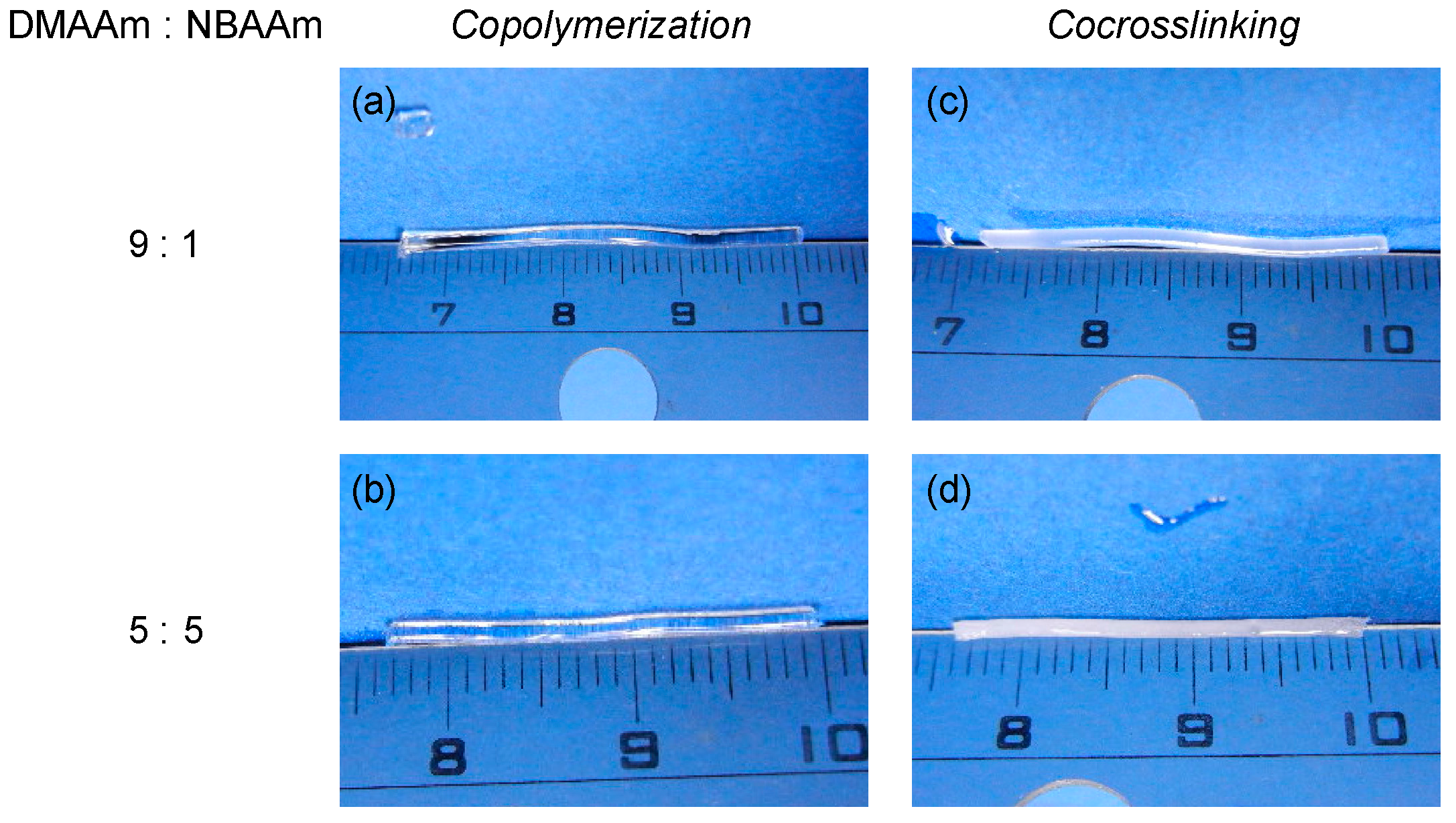 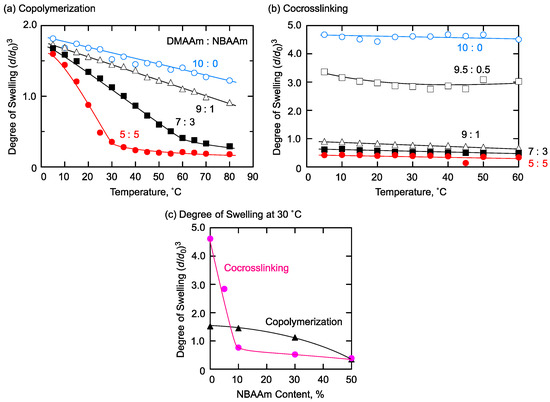 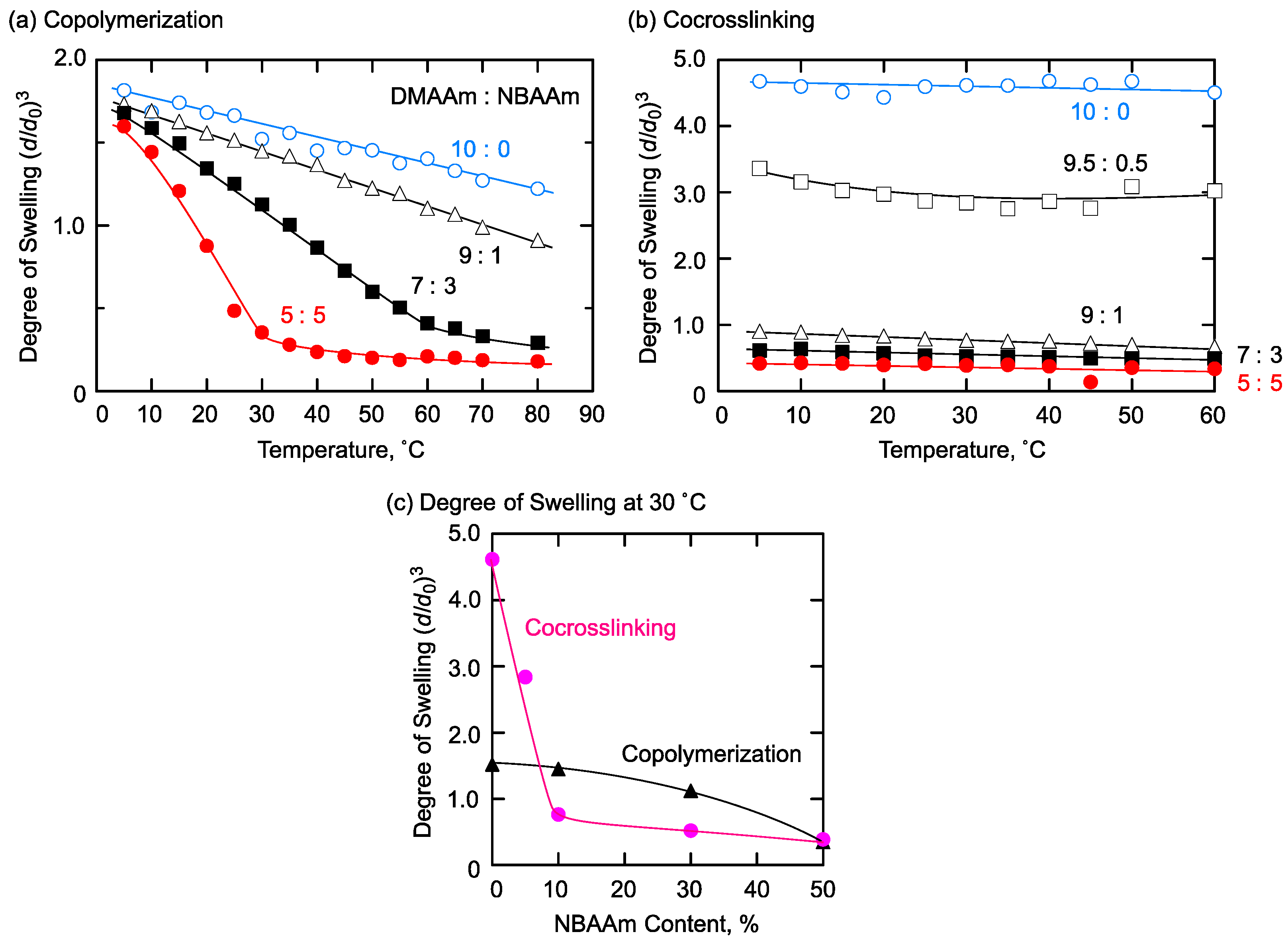