Cytochalasans from the Endophytic Fungus Phomopsis sp. shj2 and Their Antimigratory Activities

Laying the groundwork on preliminary structure–activity relationship study relating to the disruptive activity of cytochalasan derivatives on mammalian cell actin cytoskeleton, we furthered our study on the cytochalasans of the Dothideomycetes fungus, Sparticola triseptata. A new cytochalasan analog triseptatin (1), along with the previously described cytochalasans deoxaphomin B (2) and cytochalasin B (3), and polyketide derivatives cis-4-hydroxy-6-deoxyscytalone (4) and 6-hydroxymellein (5) were isolated from the rice culture of S. triseptata. The structure of 1 was elucidated through NMR spectroscopic analysis and high-resolution mass spectrometry (HR-ESI-MS). The relative and absolute configurations were established through analysis of NOESY spectroscopic data and later correlated with experimental electronic circular dichroism and time-dependent density functional theory (ECD–TDDFT) computational analysis. Compounds 1 and 2 showed cytotoxic activities against seven mammalian cell lines (L929, KB3.1, MCF-7, A549, PC-3, SKOV-3, and A431) and antiproliferative effects against the myeloid leukemia K-562 cancer cell line. Both 1 and 2 were shown to possess properties inhibiting the F-actin network, prompting further hypotheses that should to be tested in the future to enable a well-resolved concept of the structural implications determining the bioactivity of the cytochalasin backbone against F-actin. View Full-Text
Keywords: Sparticola triseptata; structure elucidation; ECD–TDDFT; antiproliferative; cytotoxic; actin inhibitors Sparticola triseptata; structure elucidation; ECD–TDDFT; antiproliferative; cytotoxic; actin inhibitors
►▼ Show Figures 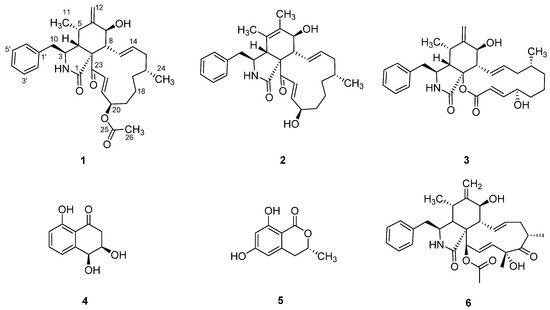