Genomic and Metabolomic Analyses of the Marine Fungus Emericellopsis cladophorae: Insights into Saltwater Adaptability Mechanisms and Its Biosynthetic Potential

The soil-borne oomycete pathogen Aphanomyces euteiches causes devastating root rot diseases in legumes such as pea and alfalfa. The different pathotypes of A. euteiches have been shown to exhibit differential quantitative virulence, but the molecular basis of host adaptation has not yet been clarified. Here, we re-sequenced a pea field reference strain of A. euteiches ATCC201684 with PacBio long-reads and took advantage of the technology to generate the mitochondrial genome. We identified that the secretome of A. euteiches is characterized by a large portfolio of secreted proteases and carbohydrate-active enzymes (CAZymes). We performed Illumina sequencing of four strains of A. euteiches with contrasted specificity to pea or alfalfa and found in different geographical areas. Comparative analysis showed that the core secretome is largely represented by CAZymes and proteases. The specific secretome is mainly composed of a large set of small, secreted proteins (SSP) without any predicted functional domain, suggesting that the legume preference of the pathogen is probably associated with unknown functions. This study forms the basis for further investigations into the mechanisms of interaction of A. euteiches with legumes. View Full-Text
Keywords: oomycete; Aphanomyces; secretome; effector; legume; adaptation; SSP; pathogenicity oomycete; Aphanomyces; secretome; effector; legume; adaptation; SSP; pathogenicity
►▼ Show Figures 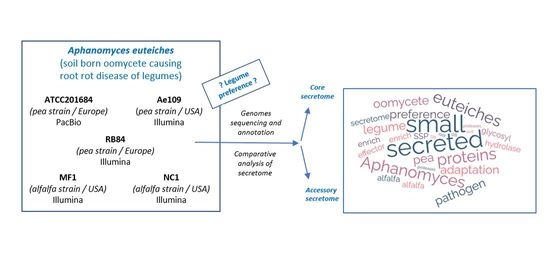