The experimental evolution of microorganisms exposed to extreme conditions can provide insight into cellular adaptation to stress. Typically, stress-sensitive species are exposed to stress over many generations and then examined for improvements in their stress tolerance. In contrast, when starting with an already stress-tolerant progenitor there may be less room for further improvement, it may still be able to tweak its cellular machinery to increase extremotolerance, perhaps at the cost of poorer performance under non-extreme conditions. To investigate these possibilities, a strain of extremely halotolerant black yeast Hortaea werneckii was grown for over seven years through at least 800 generations in a medium containing 4.3 M NaCl. Although this salinity is well above the optimum (0.8–1.7 M) for the species, the growth rate of the evolved H. werneckii did not change in the absence of salt or at high concentrations of NaCl, KCl, sorbitol, or glycerol. Other phenotypic traits did change during the course of the experimental evolution, including fewer multicellular chains in the evolved strains, significantly narrower cells, increased resistance to caspofungin, and altered melanisation. Whole-genome sequencing revealed the occurrence of multiple aneuploidies during the experimental evolution of the otherwise diploid H. werneckii. A significant overrepresentation of several gene groups was observed in aneuploid regions. Taken together, these changes suggest that long-term growth at extreme salinity led to alterations in cell wall and morphology, signalling pathways, and the pentose phosphate cycle. Although there is currently limited evidence for the adaptive value of these changes, they offer promising starting points for future studies of fungal halotolerance. View Full-Text
Keywords: experimental evolution; fungi; high salinity; halotolerance; aneuploidy experimental evolution; fungi; high salinity; halotolerance; aneuploidy
►▼ Show Figures 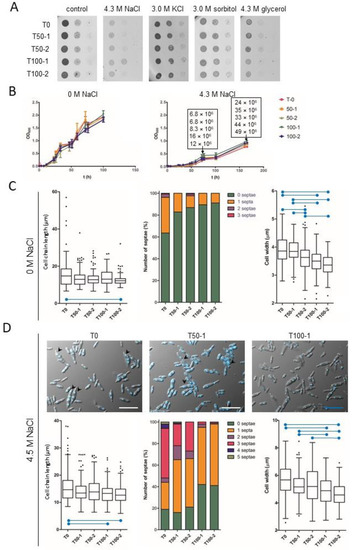