Lignocellulolytic Enzyme Production from Wood Rot Fungi Collected in Chiapas, Mexico, and Their Growth on Lignocellulosic Material
Next Article in Special Issue

Histoplasmosis Diagnosed in Europe and Israel: A Case Report and Systematic Review of the Literature from 2005 to 2020
Previous Article in Journal

Treatment and Prevention of Histoplasmosis in Adults Living with HIV

:
Histoplasmosis is an endemic fungal infection that is confined to specific geographical regions. Histoplasma spp. are primary pathogens that cause disease in both immunocompetent and immunocompromised patients, ranging from a single-organ (mostly affecting the lungs) infection to life-threatening disseminated disease. Knowledge about the clinical epidemiology relies on data from adult populations; little is known about the patient and disease characteristics in the paediatric population. Therefore, a structured review of published cases of paediatric histoplasmosis between 2000 and 2019 was performed. A literature search of PubMed was conducted and the epidemiological and clinical data from 83 cases were analysed. The mean age at presentation was 9.5 ± 5.5 years, and 51% were girls. Two-thirds of the children were immunocompromised. The majority of children presented with disseminated disease. The most frequently observed clinical symptoms were respiratory symptoms, alongside non-specific systemic features, including fever, myalgia, fatigue and weight loss. The mortality rate was 11%. Histoplasmosis affects children of any age. Being immunocompromised is a risk factor for severe and disseminated disease. The lack of specific presenting features leads to underreporting and delay in diagnosis. To improve the recognition and outcome of histoplasmosis in childhood, increased awareness and surveillance systems are warranted.
Keywords:
histoplasmosis; disseminated disease; children; infants; treatment; Histoplasma spp.

Histoplasmosis was first described in a paediatric patient in 1934, almost 30 years after the first adult patient with fatal disseminated histoplasmosis was described by Samuel Darling in 1906 [1,2]. Histoplasmosis is caused by the dimorphic fungus Histoplasma capsulatum, which can be divided into two varieties: H. capsulatum var. capsulatum and H. capsulatum var. duboisii [3]. H. capsulatum var. duboisii is found in Africa, whereas H. capsulatum var. capsulatum is most prevalent in the other endemic regions [4]. In addition to the traditional endemic regions, including the Ohio and Mississippi River Valleys in the United States, Central and South America and Africa, the true global distribution of histoplasmosis has recently been reported to be much more widespread [5]. Seroprevalence data and epidemiological studies from South-East Asia (in particular Thailand), Queensland and New South Wales in Australia, the Po Valley area in Italy, Quebec and Ontaria in Canada and an increased number of states in the United States show that histoplasmosis is endemic across the world [5]. Histoplasma conidia are found in these geographic areas in soil contaminated with bird and bat guano. Activities disturbing the soil lead to the release of the infectious conidia into the air, with infection acquired by inhaling contaminated air.
Every year, thousands of people in North and Central America and Africa are infected with Histoplasma spp.; however, most healthy individuals remain asymptomatic, as shown by an outbreak that occurred in Iowa in 1964 [6]. Six thousand people had asymptomatic infections whilst only 87 had pulmonary disease and 1 had disseminated disease. Immunocompromised patients are at risk of developing more severe primary infections, as well as reactivation of latent histoplasmosis and progression to disseminated disease, especially in patients with HIV [7].
Histoplasmosis in children can be asymptomatic or present as acute pulmonary histoplasmosis or disseminated histoplasmosis. Isolated single-organ infections are rarely reported [3,4]. Acute pulmonary histoplasmosis tends to be self-limiting and presents with fever, headache, malaise, chest pain and cough [8]. Presenting signs and symptoms of disseminated histoplasmosis are fever, malaise, anorexia and weight loss, hepatosplenomegaly, lymphadenopathy, mucous membrane ulceration and skin lesions [9,10,11]. Clinical features of histoplasmosis are non-specific and can mimic malignancies or tuberculosis [12,13].
In children living in endemic areas, asymptomatic histoplasmosis is common [14]. However, infants and immunocompromised paediatric patients are at higher risk of developing more severe disease [4,15]. Most knowledge of paediatric histoplasmosis is derived from outbreaks and case reports, and clinical management is based on adult data and experience [16]. This gap in knowledge increases the risk of late diagnosis or initial misdiagnosis, which can lead to more severe disease, and therefore, significant morbidity and mortality for children living in endemic areas. The aim of this study was to review all reported unique paediatric cases of histoplasmosis from 2000 to 2019 and extract data regarding the patient demographics, clinical features, diagnostic modalities, treatment and outcome to provide a comprehensive overview of childhood histoplasmosis.

A systematic literature search was conducted using PubMed. The following search terms: (histoplasmosis) OR (Histoplasma) were used. The following limits were applied to the search: “humans”, “age: 0–18 years” and “published between 1 January 2000–1 January 2019”. Cases were included in accordance with the inclusion and exclusion criteria (Table 1). This was done first through title analyses, then abstract analyses. Lastly, full-text analyses of the remaining results were conducted to produce a final set of studies included for final review. Diagnosis of histoplasmosis was defined as: identification of Histoplasma spp. via histopathological examination of tissue samples or culture or molecular methods and/or positive Histoplasma antigen and/or positive Histoplasma antibody detection. If the diagnostic modality was not specified, cases were included only if a definitive diagnosis was disclosed. Cases that did not disclose diagnostic information and specified the diagnosis as “probable” were excluded. Additionally, cases in which the age was not specified were excluded. In order to prevent selection bias, the entire search and selection process was repeated by another independent assessor (A.W.). Any inconsistencies were discussed until there was an agreement as to what studies should be included.
For each case, the following data were recorded: age, gender, disease type (single organ vs. disseminated disease), sites of infection, comorbidities, clinical features, diagnostic test results, treatment and patient outcome. When data on the infection sites were not explicitly provided, clinical features, radiographic findings or specimens used to identify the presence of Histoplasma spp. were used to define this. Data were managed in Microsoft Excel® and descriptive statistics were used to present the data. Statistically significant results were defined as p < 0.05. As the sample sizes were small, when assessing the clinical significance of two nominal variables, Fisher’s exact test was used.

The mean age (±standard deviation) at presentation was 9.5 ± 5.5 years, with a median age of 11 years; range: 1 month–17 years (Table 2). Of the 83 patients, 13 (15.6%) were infants (≤2 years). Gender was reported in 82 cases, of which 42 were female (51.2%). Most cases were reported from North America (63.9%), followed by Asia (16.9%), South America (12%) and Africa (6%). Of the 53 cases presented in North America, one young infant was diagnosed in a non-endemic area of the United States. Infection was most likely acquired via vertical transmission, with the mother being previously infected in Guatemala. The one child reported in Europe was thought to have acquired the infection in the Democratic Republic of Congo.
The patient’s health status was specified in 70 cases, and 49 (72.5%) had an underlying condition reported, resulting in some form of immunosuppression (Table 2). Primary immunodeficiencies, including the hyper-IgE syndrome (n = 4), STAT-1 mutation (n = 2), T-cell deficiency (n = 1), interferon-gamma-receptor-1 deficiency (n = 1), common variable immunodeficiency (n = 1) and hemophagocytic lymphohistiocytosis (n = 1), as well as HIV, were the most common cause of immunosuppression (20.4% and 18.4%, respectively), followed by a history of renal transplantation (16.3%).

Disease characteristics could be retrieved from 78 out of 83 cases (94%) (Table 3). Of these, 62 presented with a disseminated form of histoplasmosis, 12 had isolated pulmonary histoplasmosis, 2 had an isolated central nervous system infection, 1 suffered from laryngeal histoplasmosis and 1 had an isolated bone infection. The most commonly infected sites were the lungs (55.8%), followed by the lymphatic system (39%) and bone marrow (31.2%) (Table 3). No differences in the infection sites or types of diseases were observed when comparing immunocompromised to immunocompetent patients (p > 0.05, Fisher’s exact test).

Details of the diagnostic modalities used were available for 94% of the paediatric patients. Histopathology or direct demonstration of Histoplasma spp. confirmed the diagnosis in 44 (56.4%) children, whilst a positive culture was obtained in 15 (19.2%) children. The identification of specific antibodies was performed in 37 cases, either via immunodiffusion (n = 7), complement fixation (n = 8) or a combination of both (n = 10). In 12 patients, the method of antibody detection was not mentioned. Histoplasma antigen detection was performed in 35 cases. Molecular methods were used to confirm the presence of Histoplasma spp. in two cases. Table 4 provides a detailed overview of which samples were used for the diagnosis.

Treatment details were retrieved for 69 (83%) patients (Table 5). Seven children did not receive antifungal treatment, and for six children, treatment was not specified. The most common antifungal regimen was an initial treatment with amphotericin B, followed by itraconazole, followed by an itraconazole treatment, especially in those with isolated pulmonary infection (50%). Alternative azoles used included ketoconazole, fluconazole, voriconazole and posaconazole. The mean (± standard deviation) duration of the antifungal treatment was 9.0 ± 7.4 months. Outcome data were available for 73 children (Table 3 and Table 5). The majority of patients were successfully treated (n = 56, 76.7%). The mortality rate was 11.0% (n = 8). No differences in mortality were observed between the immunocompromised and immunocompetent paediatric patients (p > 0.05 using Fisher’s exact test).

The following are available online at https://www.mdpi.com/article/10.3390/jof7060448/s1, Table S1: Details of 83 paediatric histoplasmosis cases included in this review.

A.W. is supported by the MRC Centre for Medical Mycology (grant MR/N006364/2) at the University of Exeter. 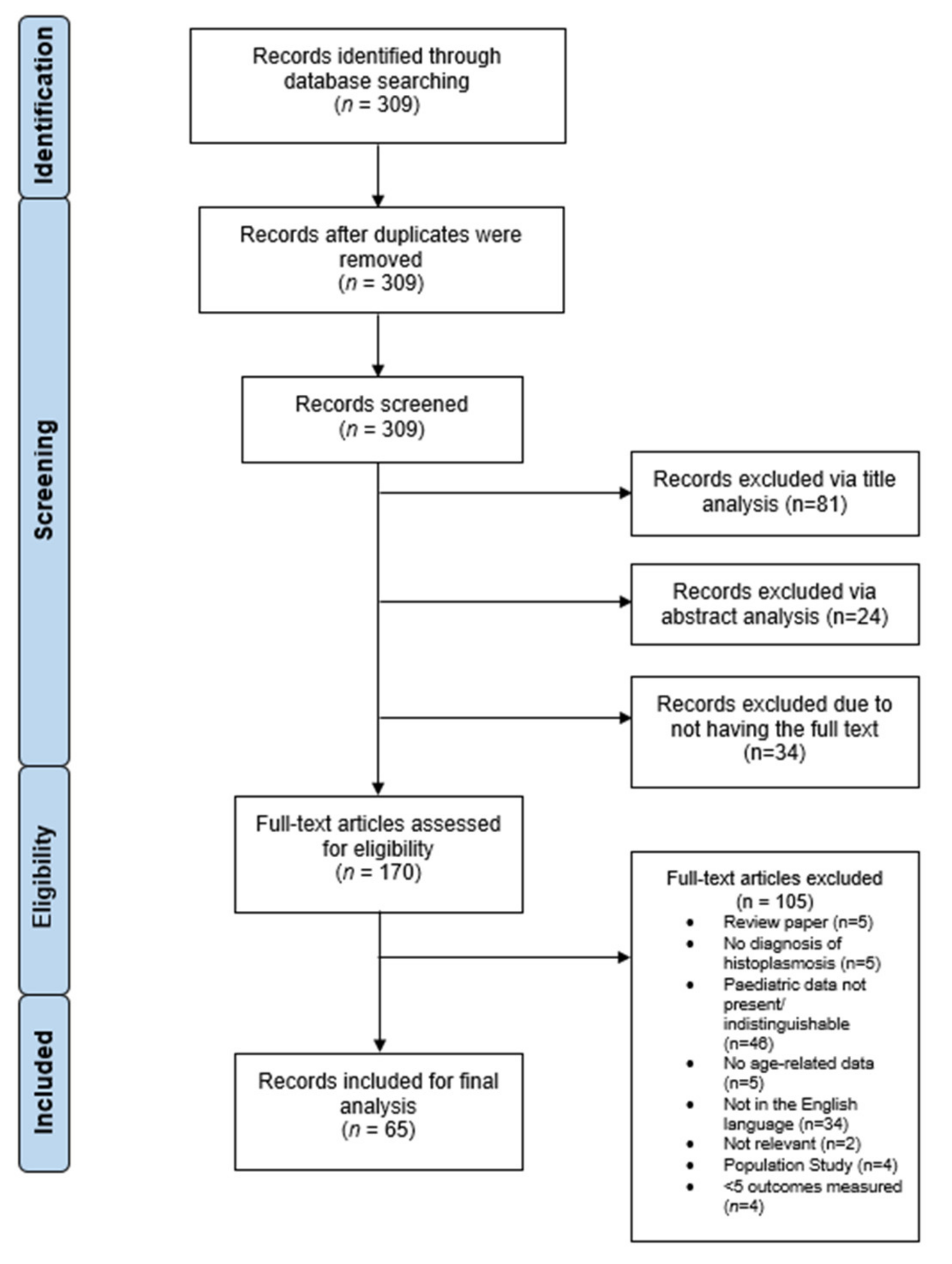 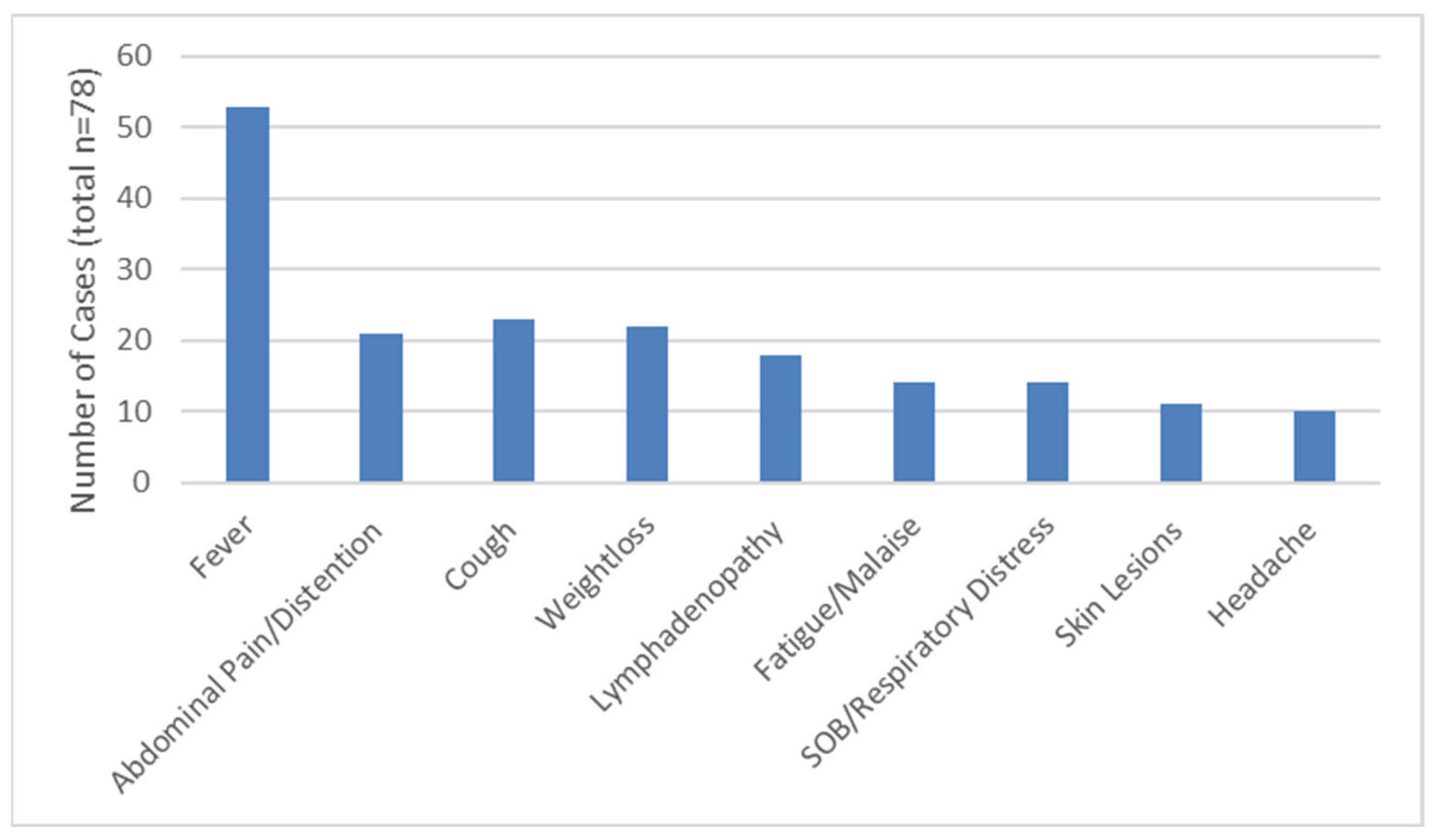