Chlorhexidine for the Treatment of Fusarium Keratitis: A Case Series and Mini Review
Next Article in Special Issue

Complex and Controversial Roles of Eicosanoids in Fungal Pathogenesis

The prevalence of fungal infections has increased in immunocompromised patients, leading to millions of deaths annually. Arachidonic acid (AA) metabolites, such as eicosanoids, play important roles in regulating innate and adaptative immune function, particularly since they can function as virulence factors enhancing fungal colonization and are produced by mammalian and lower eukaryotes, such as yeasts and other fungi (Candida albicans, Histoplasma capsulatum and Cryptococcus neoformans). C. albicans produces prostaglandins (PG), Leukotrienes (LT) and Resolvins (Rvs), whereas the first two have been well documented in Cryptococcus sp. and H. capsulatum. In this review, we cover the eicosanoids produced by the host and fungi during fungal infections. These fungal-derived PGs have immunomodulatory functions analogous to their mammalian counterparts. Prostaglandin E2 (PGE2) protects C. albicans and C. parapsilosis cells from the phagocytic and killing activity of macrophages. H. capsulatum PGs augment the fungal burden and host mortality rates in histoplasmosis. However, PGD2 potentiates the effects and production of LTB4, which is a very potent neutrophil chemoattractant that enhances host responses. Altogether, these data suggest that eicosanoids, mainly PGE2, may serve as a new potential target to combat diverse fungal infections. View Full-Text
Keywords: eicosanoids; immune response; fungi; fungal eicosanoids; pathogenesis eicosanoids; immune response; fungi; fungal eicosanoids; pathogenesis
►▼ Show Figures 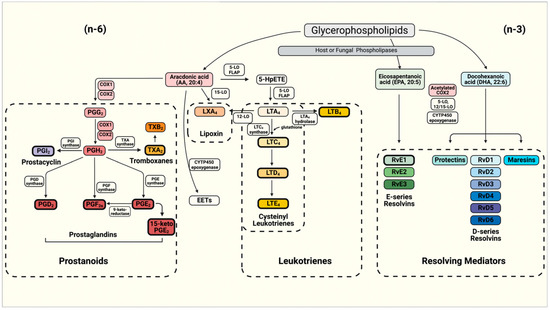