Fungi and the mycobiome are a fundamental part of the human microbiome that contributes to human health and development. Despite this, relatively little is known about the mycobiome of the preterm infant gut. Here, we have characterised faecal fungal communities present in 11 premature infants born with differing degrees of prematurity and mapped how the mycobiome develops during early infancy. Using an ITS1 sequencing-based approach, the preterm infant gut mycobiome was found to be often dominated by a single species, typically a yeast. Candida was the most abundant genus, with the pathobionts C.albicans and C.parapsilosis highly prevalent and persistent in these infants. Gestational maturity at birth affected the distribution and abundance of these Candida, with hospital-associated C.parapsilosis more prevalent and abundant in infants born at less than 31 weeks. Fungal diversity was lowest at 6 months, but increased with age and change of diet, with food-associated Saccharomycescerevisiae most abundant in infants post weaning. This study provides a first insight into the fungal communities present within the preterm infant gut, identifying distinctive features including the prominence of pathobiont species, and the influence age and environmental factors play in shaping the development of the mycobiome. View Full-Text
Keywords: mycobiome; GI tract; preterm infant; early life; pathobiont; fungi; yeast; Candida parapsilosis mycobiome; GI tract; preterm infant; early life; pathobiont; fungi; yeast; Candida parapsilosis
►▼ Show Figures 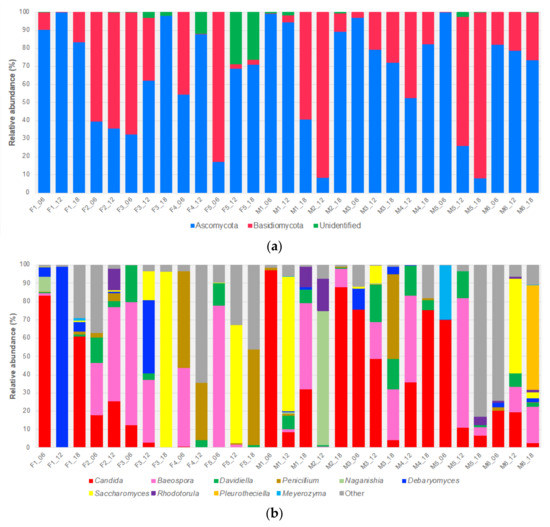