COVID-19-Associated Candidiasis (CAC): An Underestimated Complication in the Absence of Immunological Predispositions?
Next Article in Special Issue

Zinc oxide nanoparticles (ZnO NPs) belong to the most widely used nanoparticles in both commercial products and industrial applications. Hence, they are frequently released into the environment. Soil fungi can affect the mobilization of zinc from ZnO NPs in soils, and thus they can heavily influence the mobility and bioavailability of zinc there. Therefore, ubiquitous soil fungus Aspergillus niger was selected as a test organism to evaluate the fungal interaction with ZnO NPs. As anticipated, the A. niger strain significantly affected the stability of particulate forms of ZnO due to the acidification of its environment. The influence of ZnO NPs on fungus was compared to the aqueous Zn cations and to bulk ZnO as well. Bulk ZnO had the least effect on fungal growth, while the response of A. niger to ZnO NPs was comparable with ionic zinc. Our results have shown that soil fungus can efficiently bioaccumulate Zn that was bioextracted from ZnO. Furthermore, it influences Zn bioavailability to plants by ZnO NPs transformation to stable biogenic minerals. Hence, a newly formed biogenic mineral phase of zinc oxalate was identified after the experiment with A. niger strain’s extracellular metabolites highlighting the fungal significance in zinc biogeochemistry. View Full-Text
Keywords: biotransformation; biomineralization; metal oxide nanoparticles; nanoparticle dissolution; nanoparticle mobility; fungal leaching biotransformation; biomineralization; metal oxide nanoparticles; nanoparticle dissolution; nanoparticle mobility; fungal leaching
►▼ Show Figures 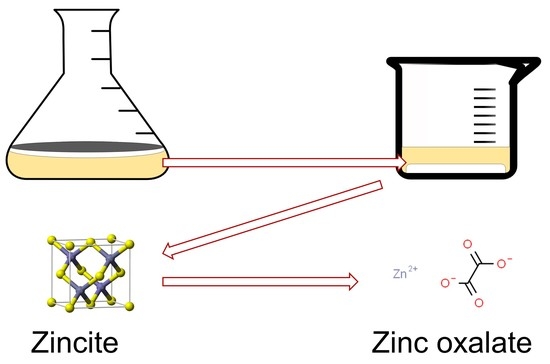