Vitamin Biosynthesis as an Antifungal Target
Previous Article in Journal

Alternaria and Fusarium Fungi: Differences in Distribution and Spore Deposition in a Topographically Heterogeneous Wheat Field

Seed persistence in the soil is threatened by microorganisms, but the seed coat helps protect the seed from them. Although modern rice (Oryza sativa L.) cultivars have a whitish caryopsis, some varieties have a red caryopsis coat, a trait typical of wild Oryza species. The red colour is due to the oxidation of proanthocyanidins, a class of flavonoids that is found in the outer layers of the seed in many species. We aimed to assess whether these natural compounds (proanthocyanidins and proanthocyanidin-derived pigment) have some protective effect against microbial attacks. Dehulled caryopses of white-grained and red-grained rice genotypes were employed to assay fungal infection. Specifically, three white-grained rice cultivars (Perla, Augusto, and Koral) and three red-grained rice varieties (Perla Rosso, Augusto Rosso, and Koral Rosso) were used. In a first test, the caryopses were infected with Epicoccum nigrum at 10 °C, and seedling growth was then assessed at 30 °C. In a second test, the degree of infection by the mycotoxigenic fungus Fusarium sporotrichioides was assayed by measuring the accumulation of T-2/HT-2 toxins in the caryopses. Infection was performed at 10 °C to prevent rice germination while allowing fungal growth. In both the tests, red caryopses showed reduced, or delayed, infection with respect to white ones. One black-grained cultivar (Venere) was assayed for the accumulation of T-2/HT-2 toxins as well, with results corresponding to those of the red-grained rice varieties. We argue that the red pigment accumulating in the caryopsis coat, and/or the proanthocyanidins associated with it, provides a protective barrier against challenging microorganisms. View Full-Text
Keywords: seed fungal infection; germination; seedling growth; pigmented rice; red rice; proanthocyanidins; grain mycotoxins seed fungal infection; germination; seedling growth; pigmented rice; red rice; proanthocyanidins; grain mycotoxins
►▼ Show Figures 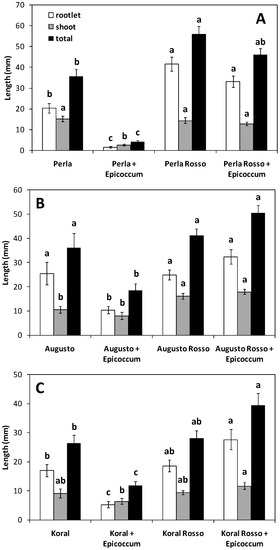