Innate Immune Responses to Cryptococcus
Next Article in Special Issue

Assessment of the Dyeing Properties of the Pigments Produced by Talaromyces spp.
Previous Article in Journal / Special Issue

Marine ecosystems cover about 70% of the planet surface and are still an underexploited source of useful metabolites. Among microbes, filamentous fungi are captivating organisms used for the production of many chemical classes of secondary metabolites bound to be used in various fields of industrial application. The present study was focused on the collection, isolation, screening and genotyping of pigmented filamentous fungi isolated from tropical marine environments around La Réunion Island, Indian Ocean. About 150 micromycetes were revived and isolated from 14 marine samples (sediments, living corals, coral rubble, sea water and hard substrates) collected in four different locations. Forty-two colored fungal isolates belonging to 16 families, 25 genera and 31 species were further studied depending on their ability to produce pigments and thus subjected to molecular identification. From gene sequence analysis, the most frequently identified colored fungi belong to the widespread Penicillium, Talaromyces and Aspergillus genera in the family Trichocomaceae (11 species), then followed by the family Hypocreaceae (three species). This study demonstrates that marine biotopes in La Réunion Island, Indian Ocean, from coral reefs to underwater slopes of this volcanic island, shelter numerous species of micromycetes, from common or uncommon genera. This unstudied biodiversity comes along with the ability for some fungal marine inhabitants, to produce a range of pigments and hues. View Full-Text
Keywords: fungi; biodiversity; Indian Ocean; Marine; coral reef; genotyping; pigment production fungi; biodiversity; Indian Ocean; Marine; coral reef; genotyping; pigment production
►▼ Show Figures 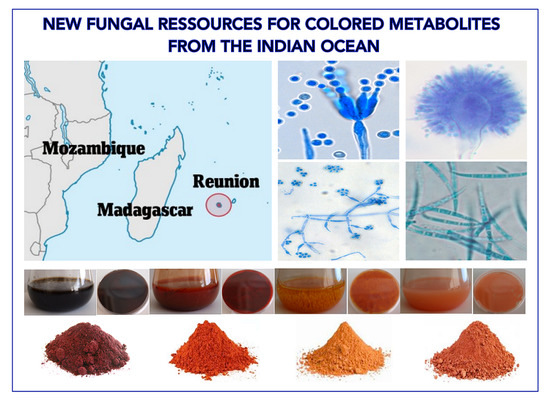