The annual yield of matsutake mushrooms (Tricholoma matsutake) has consistently decreased in Japan over the past few decades. We used 15 polymorphic and codominant simple sequence repeat (SSR) markers, developed using next-generation sequencing, to carry out genetic analyses of 10 populations in Nagano, Japan. Using the SSRs, we identified 223 genotypes, none of which was observed in more than one population. The mean expected heterozygosity and standardized allelic richness values were 0.67 and 4.05, respectively. Many alleles appeared in only one of the 10 populations; 34 of these private alleles were detected with a mean number per population of 3.4. The fixation index (FST) and standardized genetic differentiation (G′ST) values were 0.019 and 0.028, respectively. Analysis of molecular variance (AMOVA) showed that the contribution of among population, among genets within a population, and within genets variation to the total variation was 2.91%, 11.62%, and 85.47%, respectively, with genetic differentiation being detected for all sources. Twenty-eight of 45 pairwise FST values were significantly larger than zero, and no pattern of isolation by distance was detected among the 10 populations. Bayesian-based clustering did not show clear differences among populations. These results suggest that reestablishment of a colony would be best accomplished by transplantation within a field; if this is not possible, then transplantation from within several dozen kilometers will cause little damage to the original population genetic structure. View Full-Text
Keywords: genetic diversity; private allele; microsatellite markers; genet; genetic conservation genetic diversity; private allele; microsatellite markers; genet; genetic conservation
►▼ Show Figures 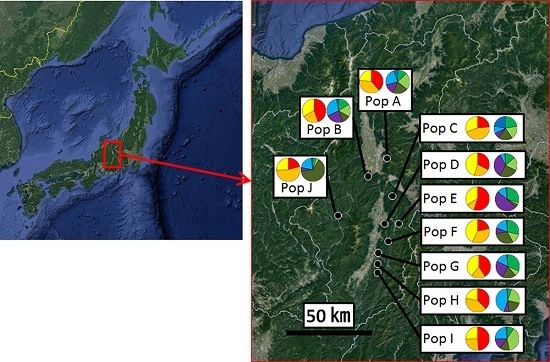