Inter-Relationships between Frailty, Sarcopenia, Undernutrition and Dysphagia in Older People Who Are Admitted to Acute Frailty and Medical Wards: Is There an Older Adult Quartet?

Introduction: With increasing age the prevalence of frailty, sarcopenia, undernutrition and dysphagia increases. These are all independent markers of outcome. This study explores the prevalence of these four and explores relationships between them. Methods: A convenience sample of 122 patients admitted to acute medical and frailty wards were recruited. Each was assessed using appropriate screening tools; Clinical Frailty Score (CFS) for frailty, SARC-F for sarcopenia, Nutritional Risk Tool (NRT) for nutritional status and 4QT for dysphagia. Results: The mean age of the participants was 80.53 years (65–99 years), and 50.37% (68) were female. Overall, 111 of the 122 (91.0%) reported the presence of at least one of the quartet. The median CFS was 5 (1–9), with 84 patients (68.9%) having a score of ≥5 (moderate or severely frail); The median SARC-F was 5 (0–10), with 64 patients (52.5%) having a score of ≥5; The median NRT was 0 (0–8) and 33 patients (27.0%) scored ≥ 1. A total of 77 patients (63.1%) reported no difficulty with swallowing/dysphagia (4QT ≥ 1) and 29 (23.7%) had only one factor. Sixteen patients (13.1%) had all four. There was a significant correlation between nutritional status and dysphagia, but not with frailty or sarcopenia. There were significant correlations between frailty and both sarcopenia and dysphagia. Conclusions: In our sample of acute medical and frailty ward patients, there was a much higher prevalence than expected (91%) of either: frailty, sarcopenia, undernutrition or dysphagia. The prevalence of all four was present in 13% of patients. We suggest that frailty, sarcopenia, nutritional risk and dysphagia comprise an “Older Adult Quartet”. Further study is required to investigate the effect of the “Older Adult Quartet” on morbidity and mortality.
Keywords: dysphagia; nutrition; frailty; sarcopenia dysphagia; nutrition; frailty; sarcopenia

The average age of the world’s population is increasing. The aetiology of this is both due to increased survival into adulthood and a greater lifespan. The proportion of people >65 years is significant in many countries including the UK (up to 15%) and Japan (up to 27%) [1,2]. Of the older population, the greatest expansion is seen in the very old (>85 years). Great age is accompanied by many social and health concerns which result in increased dependency and the accumulation of multiple long-term conditions.
In recent years, frailty, sarcopenia and dysphagia have been identified as geriatric syndromes/giants [3,4] and are thought to be the most significant contributors to hospitalisation in older adults. It is recognised that there is a complex inter-relationship between the quartet of frailty, sarcopenia, dysphagia and nutrition. The inter-relationships between these infers that a change in one will result in a cascade of events influencing the other three. Frailty is associated with weight loss, fatigue and slowing up, and can be classified as mild, moderate or severe [5,6]. When frailty is deemed severe, life expectancy is short [5].
Identifying frailty is made difficult by the lack of a universally accepted definition and agreed measure of frailty. There are at least two popular definitions of frailty; one definition is “the accumulation of deficits” [6] and the other is based on “functional decline” [5]. Part of the problem relates to the way frailty is measured, because different scales do not assess the same aspects of frailty. Therefore, it is possible to be assessed as “moderately frail” on one and “severe” on another [7]. In the UK, the Clinical Frailty Score (CFS) is commonly used within frailty services and in primary care. The electronic frailty index (eFI) is also used [8]. The CFS rates people on a categorical scale, where 1 = no frailty, 8 = severe frailty, and 9 = terminal care.
Sarcopenia is a term that describes the presence of a reduced muscle mass, muscle weakness, loss of function and fatigue [9]. Sarcopenia may be primary, where no underlying disease process can be identified or secondary to a chronic disease process (heart failure, COPD) [9]. The prevalence of sarcopenia will vary with age and has been reported to be 30% in those over the age of 85 years [10]. SARC-F is a simple screening tool for sarcopenia [11] and has five domains, each scoring between 0 and 2 to give a maximum score of 10. The higher the score, the more likely it is that sarcopenia is present. Studies have demonstrated that the SARC-F demonstrates a high specificity for the presence of sarcopenia [12]. There are also objective measures that can be used, including hand grip strength, bio-impedance and the timed up and go test.
Dysphagia is a common problem in frail older people. Dysphagia occurs when there is difficulty moving food or liquid from the mouth to the stomach. Carrion et al. reported its prevalence of 47.4% on an acute geriatric unit in Barcelona. The same group also reported that 55% of people with dementia who were admitted to hospital have dysphagia [13,14], The prevalence is even higher if there is concomitant pathology such as stroke or Parkinson’s Disease [15]. Dysphagia can be screened for by using one of the many swallowing screens. Most swallow screens have been validated in the management of stroke. Lately, Tsang et al. [16], and Uhm et al. [17] have published short questionnaires that do not rely on the use of aids (water, teaspoon and cup); these screens have shown promising results in identifying the presence of dysphagia.
Where there is no underlying pathological disease process, contributing to dysphagia, the term presbyphagia is used. Where dysphagia occurs in the context of sarcopenia, the term sarcopenic dysphagia is used [18]. However, reports in the literature have not shown a direct link between peripheral sarcopenia as assessed by handgrip strength and the presence of dysphagia. It is important to identify dysphagia and sarcopenia in frail older people admitted to hospital, so that appropriate management can be implemented, including referral to a speech and language therapist and a dietitian. Frailty and sarcopenia are associated with a pro-inflammatory state and impaired immunity, exposing people to an increased risk of infection and general decline. As a consequence, those who are most frail will be recurrently admitted to hospital.
Frailty, sarcopenia, nutritional risk and dysphagia are all common in older people and the presence of and management of each one impinges directly or indirectly on the others. As part of a Quality Improvement Series of projects to improve dysphagia management on an Acute Medical/Frailty Ward, we have looked at the relationship between sarcopenia, frailty, nutrition and dysphagia.

A convenience sample of older frail adults admitted to acute frailty and medical wards, were approached to take part, by members of the clinical team (O.Y., D.H., L.M., E.Y. and J.S.) during the post-acute phase of their admission. All were screened for the presence of dysphagia, sarcopenia, frailty and poor nutrition, using screening tools that are used in the day-to-day clinical assessments of patients. Verbal consent was obtained from all participants. This work was part of a Quality Improvement project. Approval was granted by departmental and Divisional Governance Committees.
Sarcopenia was screened for using the SARC-F tool. A score of ≥5 was taken as a significant level on the SARC-F as per previous work [10]; frailty was assessed using the clinical frailty score (CFS), where a score of 1−4 indicates not frail or mild frailty, 5–6 moderately and 7–8 severely frail or 9 terminal care; nutrition using the Nutrition Risk score (Figure 1); dysphagia using the 4QT, where a score >1 on the 4QT indicates a swallowing problem (Box 1).
A subset of 40 patients had their dominant hand grip strength assessed (L.M.) using a Jarrod dynamometer. Patients were asked to grip the dynamometer in their dominant hand, with the arm at right angles and the forearm resting on a hard surface and squeeze as tightly as possible for 5 s. The peak value was identified and then the assessment was repeated such that an average of three maximal effort squeezes could be calculated.
Box 1. 4QT Swallow screen.
Do you cough and choke when you eat and drink?
Does it take longer to eat your meals than it used to?
Have you changed the type of food that you eat?
Does your voice change after eating/drinking?
Total (Score 1 for each positive answer).
A score >0 may indicate the presence of dysphagia/ swallowing problems.

Statistical calculations were undertaken using the statistical functions of Microsoft® Excel.
To investigate the associations between frailty, sarcopenia, nutrition and dysphagia, linear regression statistics were used to calculate the Pearson’s correlation coefficient (Table 1 and Figure 3). Multiple regression analysis was undertaken to look at the relationship between nutritional risk, sarcopenia, frailty, and age with dysphagia.

This study is limited in that all the instruments used were screening tools. Formal swallowing assessments by speech and language therapists, bio-impedance and detailed nutritional assessments were not undertaken. This may have resulted in an under-estimation of the scale of the problems.
We have not included the relationship which cognitive decline or dementia would have with the “Older Adult Quartet”. Poor cognition can result in a high frailty score with a low sarcopenia score. Significant cognitive impairment would cause difficulty in completion of all the screens. The inclusion of people with significant cognitive concerns should be included in future work.
This is a single site convenience study, limited to a single site utilizing routinely collected clinical data and not a formal research study.

Frailty, sarcopenia, nutritional risk and dysphagia are common in older people. This supports the presence of an “Older Adult Quartet”. Further work is required to look at the interdependency within the “Older Adult Quartet”, and their relative contributions to outcome.

All the authors declare no conflict of interest. 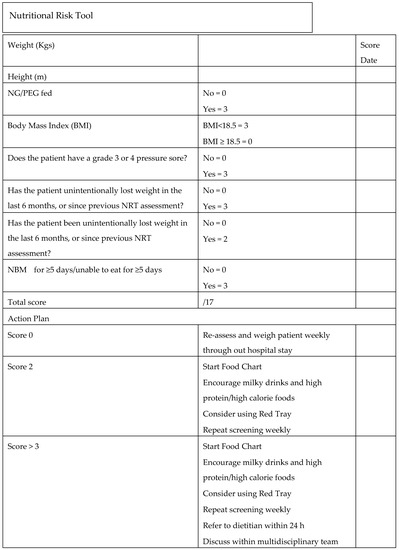 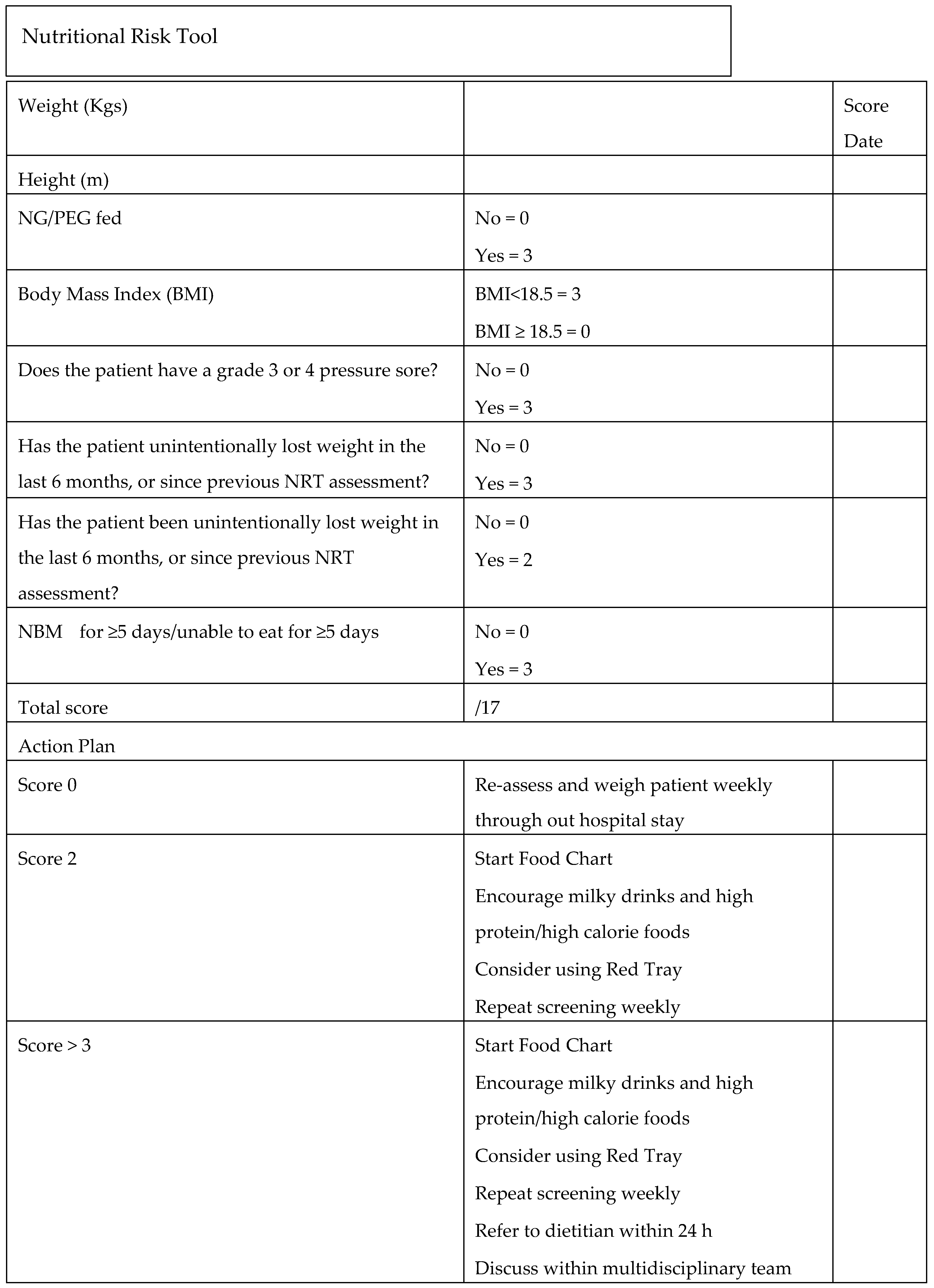 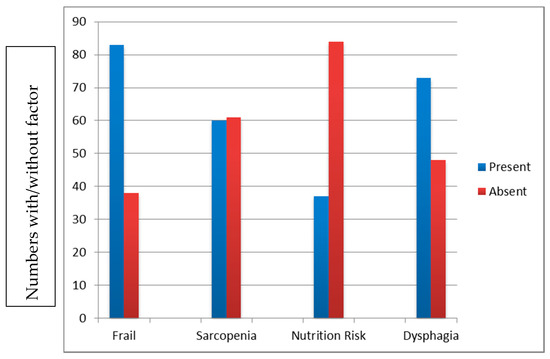 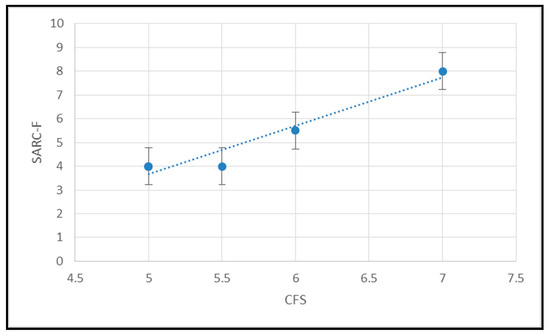 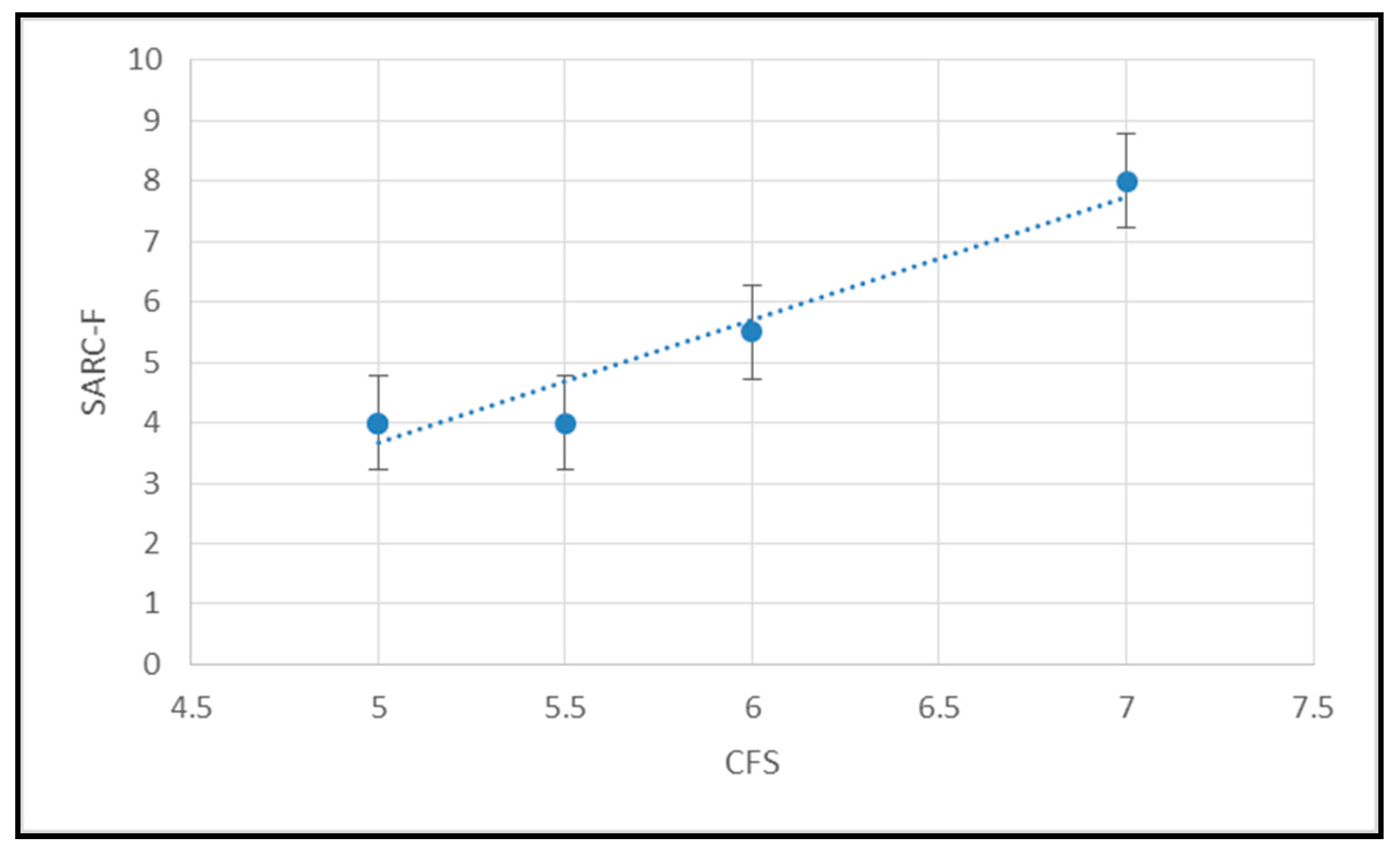