Inter-Relationships between Frailty, Sarcopenia, Undernutrition and Dysphagia in Older People Who Are Admitted to Acute Frailty and Medical Wards: Is There an Older Adult Quartet?
Next Article in Special Issue

Evaluation of a Combined HIV and Geriatrics Clinic for Older People Living with HIV: The Silver Clinic in Brighton, UK
Previous Article in Journal

Pain and Its Impact on Functional Health: 7-Year Longitudinal Findings among Middle-Aged and Older Adults in Indonesia
Previous Article in Special Issue

The term frailty is being increasingly used by clinicians, however there is no strict consensus on the best screening method. The expectation in England is that all older patients should have the Clinical Frailty Scale (CFS) completed on admission. This will frequently rely on junior medical staff and nurses, raising the question as to whether there is consistency. We asked 124 members of a multidisciplinary team (consultants, junior doctors, nurses, and allied health professionals; physiotherapists, occupational therapists, dietitians, speech and language therapists) to complete the CFS for seven case scenarios. The majority of the participants, 91/124 (72%), were trainee medical staff, 16 were senior medical staff, 12 were allied health professions, and 6 were nurses. There was broad agreement both between the professions and within the professions, with median CFS scores varying by a maximum of only one point, except in case scenario G, where there was a two-point difference between the most junior trainees (FY1) and the nursing staff. No difference (using the Mann–Whitney U test) was found between the different staff groups, with the median scores and range of scores being similar. This study has confirmed there is agreement between different staff members when calculating the CFS with no specific preceding training. View Full-Text
Keywords: frailty; clinical frailty score frailty; clinical frailty score
►▼ Show Figures 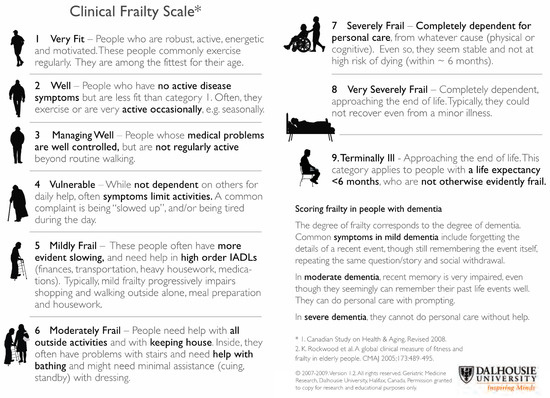