The milk ring test is a detection assay for antibodies against Brucella in bovine milk. It has good sensitivity but tends to give false positive results. In this study, we standardized the application of the fluorescence polarization assay (FPA) for the detection of antibodies against B.melitensis in goat milk. We obtained negative serum and milk samples from healthy goat flocks in the northern zone of Nuevo León. Positive milk and negative, weak, and strong controls were obtained by mixing volumes of positive control serum with negative control milk. Milk samples were treated with citric acid, after which an FPA was performed. Results were then compared with the Rose Bengal test and the FPA in serum. Milk treatment allowed the quantification of antibodies in samples. Significant differences were found between the 2%, 4%, and 6% groups, compared with the control group (F3, 67 = 17.45, p < 0.0001) but not between the 2% and 4% groups (p = 0.0718). The cut-off value was 74.1 mP, with a sensitivity (Se) of 95% and a specificity (Sp) of 100%. Se and Sp values in field milk samples were 84% and 74.55%, respectively. Despite the FPA test on milk samples showed lower Se and Sp than the FPA test on serum samples, its cutoff may be adjusted. It may be recommended as a screening test in goat milk and become useful for the control and eradication of the disease. View Full-Text
Keywords: brucellosis; fluorescence polarization assay; goat milk; diagnosis; epidemiology brucellosis; fluorescence polarization assay; goat milk; diagnosis; epidemiology
►▼ Show Figures 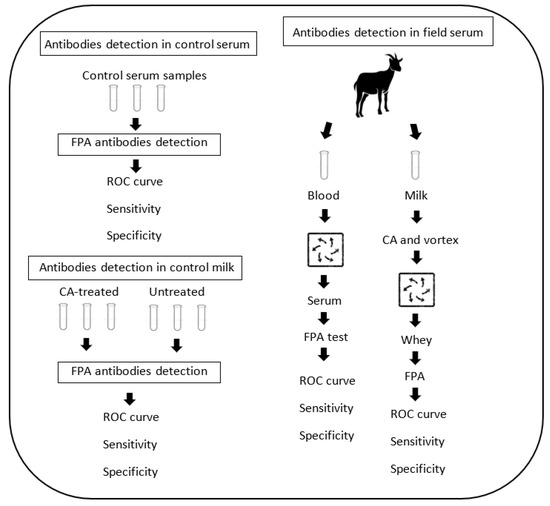