Bee Health and Productivity in Apis mellifera, a Consequence of Multiple Factors

Clinical, pathological, and immunohistochemical findings related to a feline mammary tumor with similar features to canine anaplastic mammary carcinoma are herein described for the first time. A female cat was presented for clinical evaluation with gastrointestinal signs, oedema, erythema, and painful lesion in the right inguinal region. Three weeks later, the mass had doubled in size and radiographic revaluation of the thoracic cavity revealed a metastatic pattern. Due to the poor prognosis and decline of the clinical status the owners decided for euthanasia. Post-mortem examination exposed a mammary tumoral mass with subcutaneous oedema, an enlargement of the right inguinal lymph node, and nodules in several organs. Histological analysis confirmed the presence of large pleomorphic epithelial cells, often grouped in small clusters with bizarre nuclei. Immunohistochemical study of the different lesions was performed and both primary tumor and regional metastasis showed tumor cells to be negative estrogen receptor alpha, positive progesterone receptor, positive HER-2, and positive pan-cytokeratin. Given that the clinical history was compatible with an inflammatory mammary carcinoma, the cyclooxygenase-2 expression levels were evaluated and presented a weak immunoreactivity. Regarding the distant metastatic lesions, tumor cells were negative for ER-α and PR and, positive both for HER-2 and pan-cytokeratin. View Full-Text
Keywords: anaplastic; feline mammary carcinoma; clinicopathological; immunohistochemical anaplastic; feline mammary carcinoma; clinicopathological; immunohistochemical
►▼ Show Figures 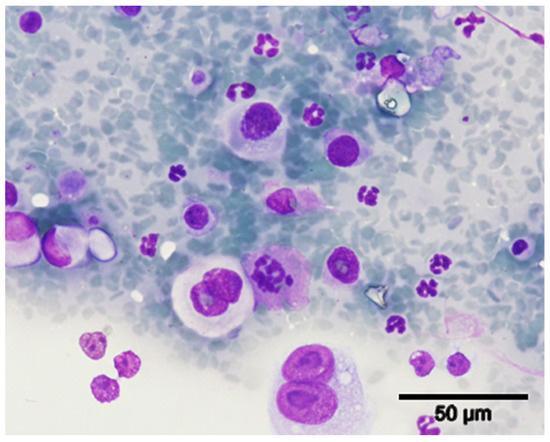