Doppler sonographic techniques are used to measure and visualize blood flow in the avian heart to diagnose heart diseases [1,2,3,4,5,6,7,8,9,10,11,12,13]. Tissue Doppler imaging (TDI) or tissue velocity imaging (TVI) is a method used to quantify myocardial movement and function in human and small animal medicine [14,15,16,17,18,19]. This Doppler sonographic technique allows the quantitative measurement of the velocities of myocardial structures during the cardiac cycle. The velocity of the myocardial tissue is measured by pulsed wave tissue Doppler sampling, which shows the peak tissue velocities within a selected myocardial region over the cardiac cycle [14,17]. Studies in human and small animal medicine have worked out the prognostic role of TDI-derived parameters for cardiac diseases, such as myocardial infarction, hypertension, and heart failure [14,16,20,21,22]. Secondary heart failure due to atherosclerotic lesions is a common heart disease in avian medicine [1,2,3]. In the recent literature, blood flow velocity changes have been described in heart diseases due to atherosclerosis in parrots [3,23]. With this background, the TDI could also be a new method in avian medicine to quantify myocardial velocities and use these velocities to diagnose heart diseases. In avian medicine, this technique has not yet been used to evaluate the heart. In this study, we describe the longitudinal myocardial peak velocities in the systole and diastole measured by TDI in awake healthy racing pigeons.

The animal experiments described in this manuscript were conducted in accordance with the German animal welfare regulations and with the permission of the relevant German authorities (reference number: 33.12-42502-04-15/1864).

Myocardial velocities were measured in racing pigeons (Columba livia f. domestica; n = 40) of both sexes (male: n = 15; female: n = 25) at the age of 2.28 years ± 1.75 (SD) (range: 1 to 8 years) and the weight of 467.15 g ± 53.33 (SD) (range: 352–577 g). For the evaluation of body size, the sternal length of the pigeons in laterolateral radiographic images from the visible sternocoracoid joint to the end of the sternum was measured and had a characteristic size of 73.23 mm ± 3.13 (SD) (range: 63.2–80.4 mm). The pigeons were routinely trained by their owners for racing and vaccinated for pigeon avulavirus 1 (paramyxovirus 1) and salmonellosis. During the period of investigation, the pigeons were housed in indoor aviaries and were offered a commercial pigeon seed mix and fresh drinking water ad libitum. Prior to the ultrasound examination, all the pigeons showed normal drinking and feeding behavior and were acclimatized to the new aviaries for two weeks. The pigeons were tested negative for Salmonella and endoparasites of the intestines (composite fecal samples). Low-grade infestation with Trichomonas gallinae in some pigeons was treated with 10 mg of carnidazole once (Spatrix®, Elanco Deutschland GmbH, Bad Homburg, HE, Germany) two weeks before the beginning of the examinations. The pigeons were declared healthy by clinical, hematological, and radiological examinations. The hematocrit (44.9 ± 1.8%; 42.0–49.0%) and the buffy coat (˂ 1%) of the pigeons were within the reference values of healthy and normally hydrated pigeons [24]. The radiographically measured maximum width of the cardiac silhouette of the pigeons was within 58.7 ± 3.32% (50.3–65.1%) of the maximum width of the thorax in the range of healthy birds in the literature [1].
Female egg-laying pigeons were excluded from sonographic examinations. The influence of high abdominal pressure should be avoided in these cases.

For the sonographic examination, the pigeons were fixed in a semi-upright dorsal position without anesthesia or sedation. The pigeons were held by an assistant by the neck and the extended legs with the wings were fixed against the body. The echocardiographic examinations were performed with a digital ultrasound system (Vivid 7 Dimension BT08; GE VINGMED ULTRASOUND A/S, Horten, V, Norway) equipped with a 10 MHz phased-array transducer (GE 10S-RS Probe, B Mode, 4.5–11.5 MHz; GE VINGMED ULTRASOUND A/S, Horten, V, Norway).The heart was sonographically examined from the left and right parasternal views [1] with a simultaneous electrocardiogram (ECG). The ECG was taken with clamps without teeth on the right and left patagium and the left flank fold according to Einthoven [25,26,27].
The 2D echocardiographic images were named and oriented according to Riedel (1995), Schulz (1995), and Pees et al. (2006) [1,28,29]. The right parasternal longitudinal horizontal view (“four-chamber view”) was used to measure the myocardial velocities of the left free wall, septum, and right free wall, and the right free wall was measured for the second time in the left parasternal longitudinal horizontal view. The ultrasound beam was aligned to be as parallel as possible to the direction of the myocardial longitudinal movement.
The pulsed wave TDI function of the ultrasound system was used to assess the myocardial velocities of the pigeon heart. In this software function, TDI image loops showing the velocity of the myocardial motion that is superimposed on the 2D echocardiographic images in the real-time display were recorded in connection with the ECG. The angle of view of the TDI images was set to be as small as possible to guarantee frame rates above 200 frames per second. The pulse repetition frequency value (PRF) was set to 2.5 kHz. Movements towards the transducer were color-coded in red and movements away from the transducer were color-coded in blue. The TDI images and loops were stored on the ultrasound system and evaluated offline with the Q analysis function of the ultrasound system, which is a quantitative analysis. Color-coded velocities were automatically decoded into numerical velocities for quantitative analysis with this function. Therefore, a sample area of 2 mm in diameter as a region of interest (ROI) was placed manually in the apical, middle, and basal myocardial heart wall segments of the left and right free heart walls and the septum in the four-chamber view. The myocardial velocity curves were reconstituted from the color TDI images in Q analysis without a filter setting. The myocardial systolic peak velocity (S’ wave; cm/sec), the early diastolic peak velocity (E’ wave; cm/s), and the late diastolic myocardial peak velocity (A’ wave; cm/s) were measured. The myocardial velocities of each pigeon were measured in ten sequential heart cycles and the mean was used for further evaluations after examining the distribution. Additionally, the diastolic and systolic blood flow velocities were measured by pulsed wave (PW) Doppler sonography at the level of the heart valves with a sample volume of 1.5 mm and a wall filter setting of 3.4 cm/s [9,11,30].
In six pigeons, the myocardial velocities were measured on six different days over six different weeks to calculate the weekly individual variation in the TDI measurements. The influence of the sonographic angle was also evaluated in these six pigeons. For this reason, in addition to the first measurement, the second measurement of the myocardial velocities with an increased sonographic angle over 40 degrees was performed.

Statistical tests were performed using the software package SAS Enterprise 7.1. The mean, standard deviation (SD), median, and range (Xmin to Xmax) of the myocardial velocities were calculated. The Kolmogorov–Smirnov test was used to verify normal distribution. The differences between the myocardial velocities of the different heart wall segments were calculated by two-factor variance analysis (two-way ANOVA) and a subsequent Tukey–Kramer test. The influence of the ultrasound angle on the measured myocardial velocities was visualized using the Wilcoxon signed-rank test. A two-way ANOVA was used to visualize the influence of the acoustic window on the measured myocardial velocities on the right heart free wall. The day-dependent variance was calculated with a one-factor variance analysis (one-way ANOVA) and a subsequent Tukey–Kramer test. The coefficient of variation (CV) was used for the determination of the weekly and individual variance of the measurements. The percentage share of the individual and the day of examination in the error was described using an intraclass correlation coefficient. Spearman’s rank correlation coefficient was used to visualize the correlation of the heart rate and age with the TDI parameters. The significance level of p ≤ 0.05 was chosen (slightly significant: p ≤ 0.05; moderately significant: p ≤ 0.01; highly significant: p ≤ 0.001).

3.2. The Influence of Heart Rate

There was no statistically significant (p > 0.05) influence of age, sex, or body weight on the peak myocardial velocities of the examined pigeon hearts.

Six pigeons were measured six times over six different weeks to calculate the variation range of the myocardial velocities. The measured myocardial velocities of these six pigeons are illustrated in Figure 5. There were no significant differences between the pigeons or between the examination days (p > 0.05). Additionally, the heart frequencies of the six pigeons were not significantly different between the six examination days (p > 0.05). The individual distribution of the measured values of the basal wall segments of the six pigeons was calculated by the CV shown in Table 3. The variations in the weekly measurements of the basal heart wall segments of the six pigeons are shown in Table 4. The systolic and E’ wave velocities of the septum and left free wall showed the lowest variance. The percentage distribution of the error between the individual pigeons, the observer, and the examination day is shown for the basal wall segments in Table 5.

The study was conducted according to the guidelines of the Declaration of Helsinki, and approved by the Institutional Review Board of Niedersächsisches Landesamt für Verbraucherschutz und Lebensmittelsicherheit (protocol code: 33.12-42502-04-15/1864; date of approval: 7 August 2015).

The authors would like to acknowledge the pigeon breeders for participating in this study and Karl Rohn (Institute for Biometry, Epidemiology, and Information Processing, University of Veterinary Medicine Hannover, Foundation) for help with the statistical analysis of the data. 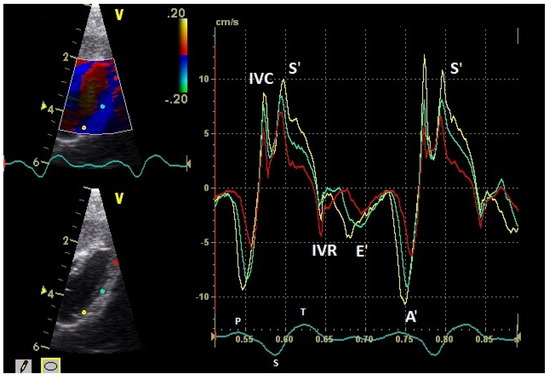