Differences between the Filling Velocities of the Left and Right Heart Ventricle in Racing Pigeons (Columba livia F. Domestica) and the Influence of Anesthesia with Isoflurane

The ventricular filling velocities during diastole and the influence of isoflurane anesthesia on these blood flow velocities of the racing pigeon (n = 43) are evaluated by pulsed-wave (PW) Doppler sonography. Sonographic examination demonstrates an early passive ventricular (E wave) and late active (A wave) ventricular filling. The results indicate differences between the two heart ventricles. Especially, the E wave velocity of the right heart is significantly lower than in the left heart, which is explained by the crescent-shaped cavity of the right ventricle around the left ventricle. The faster active filling velocities are significantly influenced by heart rate in conscious birds. Anesthesia with isoflurane leads to a significant decrease of the diastolic blood flow velocities, and the A wave velocities of both ventricles are especially influenced. Anesthesia with isoflurane induces a high incidence of insufficiencies of the left atrioventricular valve in the preejection period. These observations indicate that a contraction of the left ventricle myocardium is important for a complete valvular closure and for normal functioning of this heart valve. The effective closure of the right atrioventricular muscle valve in anesthetized pigeons supports the observation of the fast innervation of this muscle valve via a direct connection to the right atrium. View Full-Text
Keywords: sonography; heart valve; blood flow velocity; diastole; birds sonography; heart valve; blood flow velocity; diastole; birds
►▼ Show Figures 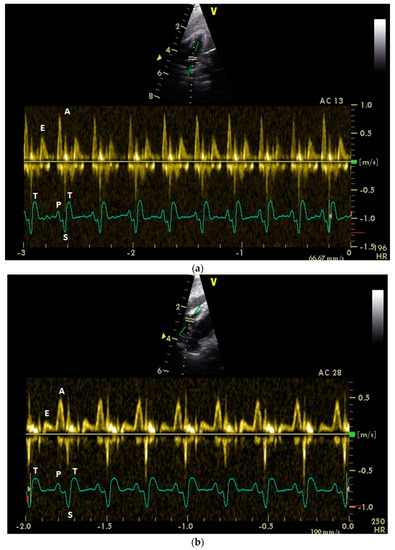