Additional Progress in the Development and Application of a Direct, Rapid Immunohistochemical Test for Rabies Diagnosis

A Perspective on Rabies in the Middle East—Beyond Neglect

Rabies is a neglected but preventable viral zoonosis that poses a substantial threat to public health. In this regard, a global program has been initiated for the elimination of human rabies caused by rabid dogs through the mass vaccination of canine populations. Geographic areas vary greatly towards attainment of this objective. For example, while dog-mediated and wildlife rabies have been largely controlled in major parts of the Americas and Western Europe, the Middle East still grapples with human rabies transmitted by unvaccinated dogs and cats. Rabies prevention and control in the Middle East is quite difficult because the region is transcontinental, encompassing portions of Africa, Asia, and Europe, while consisting of politically, culturally, and economically diverse countries that are often subject to war and unrest. Consequently, one over-riding dilemma is the misinformation or complete lack of rabies surveillance data from this area. This communication is an attempt to provide an overview of rabies in the Middle East, as a cohesive approach for the honing of disease management in each area, based on data compiled from multiple sources. In addition, the related regional transboundary movement of rabies was investigated through phylogenetic studies of available viral gene sequences. Thereafter, the epidemiological status of rabies was assessed for the region. Finally, localities were classified first by the Stepwise Approach towards Rabies Elimination framework and then categorized into four different groups based on management theme: “rabies free”; owned dog and domestic animal vaccination; community dog vaccination; and wildlife vaccination. The classification system proposed herein may serve as a baseline for future efforts. This is especially important due to the severe lack of rabies information available for the Middle East as a whole and a need for a comprehensive program focusing on the entirety of the region in light of renewed international commitment towards canine rabies elimination. View Full-Text
Keywords: canine vaccination; dog; lyssavirus; Middle East; neglected disease; prophylaxis; rabies; surveillance; zoonosis canine vaccination; dog; lyssavirus; Middle East; neglected disease; prophylaxis; rabies; surveillance; zoonosis
►▼ Show Figures 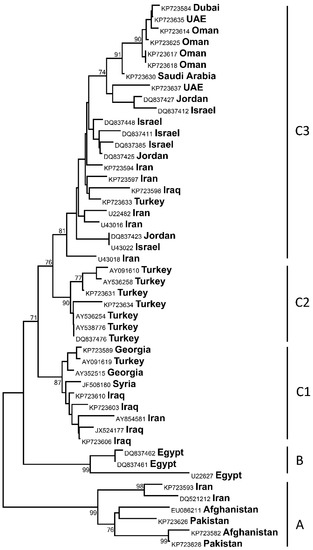