Photobacterium damselae subsp. damselae (Pdd) is considered to be an emerging pathogen of marine fish and has also been implicated in cases of histamine food poisoning. In this study, eight strains isolated from mullets of the genera Mugil and Liza captured in the Ligurian Sea were characterized, and a method to detect histamine-producing Pdd from fish samples was developed. The histamine-producing potential of the strains was evaluated in culture media (TSB+) using a histamine biosensor. Subsequently, two strains were used to contaminate mackerel fillets (4 or 40 CFU/g), simulating a cross-contamination on the selling fish stalls. Sample homogenates were enriched in TSB+. The cultures were then inoculated on thiosulfate-citrate-bile salts-sucrose agar (TCBS) and the dark green colonies were cultured on Niven agar. The violet isolates were characterized using specific biochemical and PCR based tests. All Pdd strains were histamine producers, yielding concentration varying from 167 and 8977 µg/mL in TSB+ cultures incubated at 30 °C for 24 h. Pdd colonies were detected from the inoculated mackerel samples and their histidine decarboxylase gene was amplified using species-specific primer pairs designed for this study. The results indicate that mullets can be source of Pdd and the fish retailers needs to evaluate the risk posed by cross-contamination on the selling fish stalls. View Full-Text
Keywords: Photobacterium damselae subsp. damselae; histidine decarboxylase; cross contamination; mullets; histamine biosensor Photobacterium damselae subsp. damselae; histidine decarboxylase; cross contamination; mullets; histamine biosensor
►▼ Show Figures 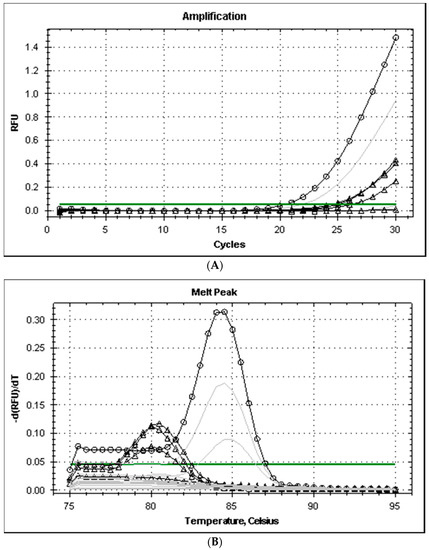